By Elliot Hughes, Milwaukee Neighborhood News Service - Sep 28th, 2017 10:58 am
Get a daily rundown of the top stories on Urban Milwaukee 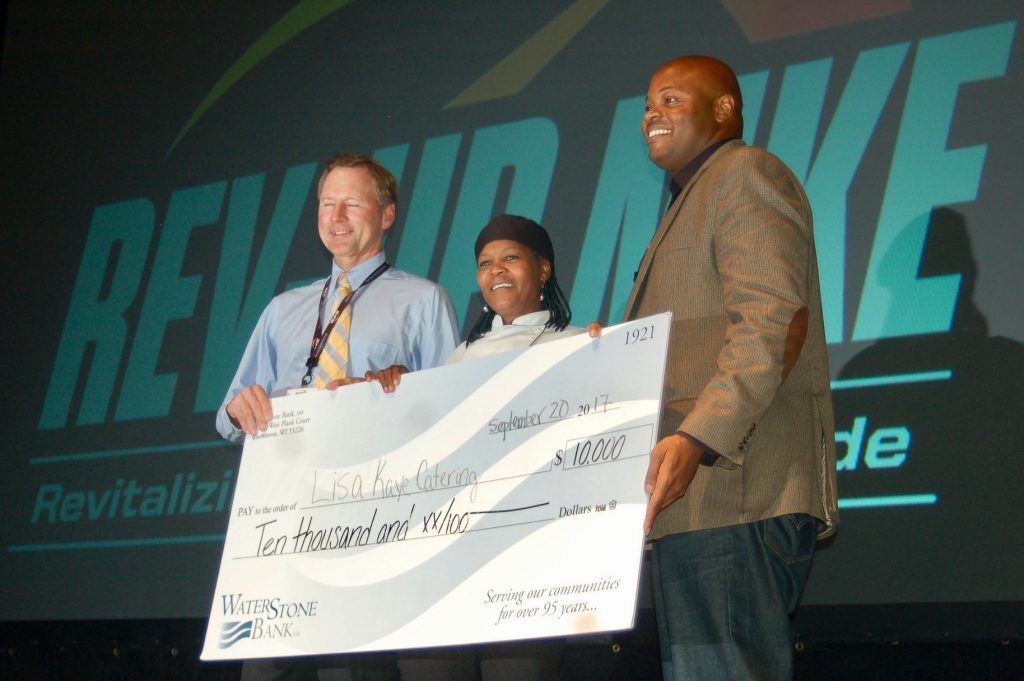 Lisa McKay, center, is presented with a $10,000 check that will help her move her business into a storefront on the Near West Side. Also pictured is Doug Gordon, CEO of WaterStone Bank, left, and Keith Stanley, executive director of Near West Side Partners. Photo by Elliot Hughes.

Lisa McKay and her husband have spent months scoping a vacant building on the Near West Side as a potential headquarters for their catering business, but they haven’t made a move because the money hasn’t been there.

It’s made McKay antsy. She doesn’t want to lose the building to someone else.

But last Wednesday, she may have gotten the resources she needs to make that building home for the business she started from scratch about 10 years ago.

McKay took home $11,000 and other resources by winning the second annual Rev-Up MKE event, a small business competition hosted by Near West Side Partners, Inc. to bring new businesses and jobs to the neighborhood. 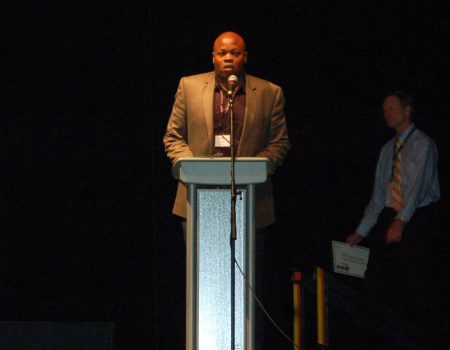 “All week I had been so crazy and tired and I had a lot of catering jobs and I had so much on my plate,” McKay said after the announcement in front of about 300 people at The Rave Eagles Club ballroom. “I hadn’t been to church in a while but Sunday, I just had to just go to church. I was so tired from just preparing (for the competition). I still went to bed last night still not feeling prepared. This morning I got up and i just felt so much confidence. Everything just fell in place.”

McKay, who owns Lisa Kaye Catering, beat out 30 applicants and five other finalists in the competition. The six finalists all presented 10-minute pitches to the judges and an audience of about 300 people last Wednesday before announcing the winner.

McKay worked for multiple corporations as an executive assistant until she entered the catering business. It started with small events for friends and family in 2007. The following year, she pulled off her first wedding.

Since then she has gotten a culinary degree from Milwaukee Area Technical College and won a “chef of the year” award from the American Culinary Federation, according to the business website.

McKay said her business catered 92 events in 2015, 220 in 2016 and is projected to cover 242 events in 2017. She said she employs four chefs — one full time. Her company is also involved with a summer culinary camp for kids and volunteering in schools to advocate healthy eating.

She said the panel of five judges probably selected her because she has already established a growing business and a positive reputation in the city.

“I have a solid company,” she said. “I have been doing this for over eight years. I’m stable, I’m a woman of my word.”

As the first-place winner, McKay won $10,000 in funding from WaterStone Bank; more than $25,000 in in-kind services, such as business consulting and communication support; one year of computer power, storage space and internet bandwidth; and advertising from the Near West Side Partners. McKay also won $1,000 for the audience favorite award.

Coming in second place, with a $4,000 prize, was Annalies Tilley-Grantz and her Hands in Harmony Piano Studio. Tilley-Grantz provides after-school piano lessons for elementary and middle school students at Highland Community School. In her pitch, she said she hopes to expand the program to more schools in Milwaukee and open up a headquarters to offer lessons to students in high school.

The four other finalists were:

All six finalists were paired with a mentor organization — either Marquette University, Aurora Health Care, Harley-Davidson or MillerCoors — which offered resources and support for the competition.

“In the economy we’re in, we have to focus on entrepreneurs,” said Keith Stanley, executive director of Near West Side Partners. “This is exciting for me to work with these local business owners that hopefully will be that engine, that life blood for us to move forward in economic development in the Near West Side.”