The dishes are tasty. 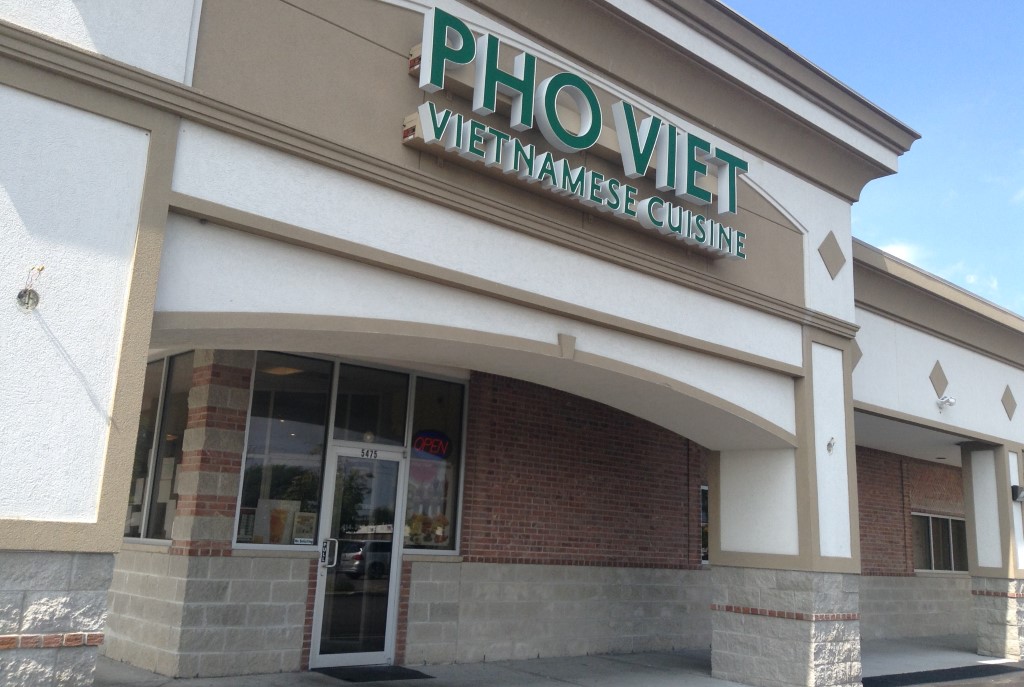 I discovered Pho Viet on South 27th by accident because it’s adjacent to Pacific Produce, a humungous Asian grocery store. When a friend and I went to browse the groceries, I noticed Pho Viet and detoured next door. This turned out to be a happy diversion which introduced us to some never-before-tasted dishes with names I couldn’t even begin to pronounce.

Most of the customers had big bowls of Pho sitting in front of them. Pho, often considered the national dish of Vietnam, is regularly served on the street in cities.

I’m no stranger to Pho, so I passed on the dozen varieties listed on the menu. What they had in common was beef broth with rice noodles and a protein, everything from steak, meatballs, seafood, chicken, tendon, and tripe to a quail egg, just not all in the same bowl at the same time. They serve Pho with what they call a “side of vegetables,” a large portion of bean sprouts, basil, cilantro, mint, jalapeno slices, and lime. This combination of broth, protein, and greens, ends up being a simple, yet complex bowl of noodles some think of as soup, but it’s more than that, it’s a filling entrée when served in a restaurant. 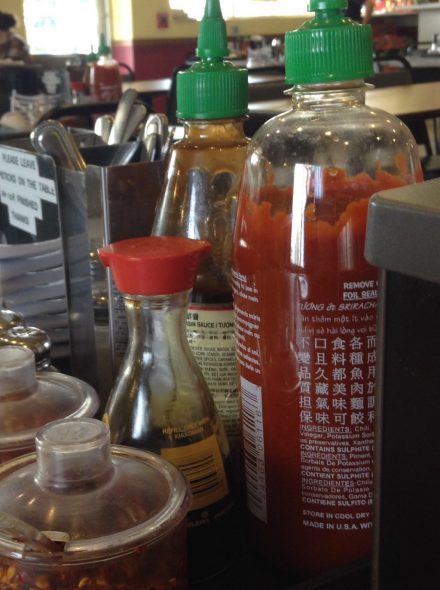 From an extensive menu of unpronounceables I chose Bahn Xeo, described in the menu as a Vietnamese crepe filled with shrimp, pork, and bean sprouts. What came on my plate was not what I expected. Our server explained “Bahn Xeo” means sizzling cake, or the sound it makes when the batter is poured into a pan. And unlike the familiar French crepe, there was no egg in this one; the yellow color came from tumeric powder. It was crunchy, hard to eat with a fork, more like finger food, and it needed salt. I noted an array of condiments, Soy Sauce, Shiracha, and Hoisin, all of which when used profusely, upgraded my crepe from interesting but bland, to delicious. The flavors of the thin slices of shrimp and pork, plus the bean sprouts, as well as the crepe itself, came alive with the condiments. Like everything we sampled at Pho Viet, the crepe came with greens tossed in a light, almost imperceptible vinaigrette. Shredded pickled carrots hidden under the greens added tart, while Nuac Mam, a fermented fish sauce which I had previously encountered, potentially added another flavor, just not on my plate.

My companion spooned some Nuac Mam on his Bun Thit Ga Nuong, said it left a hint of fishy, but not enough to offend. He also said his dish, charbroiled chicken with rice noodles and vegetables tasted healthy. He thought the chicken had great charbroiled flavor while the vegetables were fresh and crisp. He too added Soy, Shiracha, and Hoisin and agreed the condiments redefined the dish.

On a second visit, we found the Tom Kho To, simmered caramel shrimp with onion and black pepper, did not hold back on the shrimp. More than a dozen tasted of black pepper but the caramel part of the dish escaped us. When we dumped the basic boring steamed white rice into the bowl, it soaked up the sauce, and picked up the peppery flavor from the shrimp.

For the Mi Xao Dau Hu, I had a choice of soft or crispy pan-fried egg noodles. I followed our server’s advice and ordered soft. This dish, a vegetarian’s delight with strips of sautéed tofu along with the vegetables, starred those egg noodles which had so much more flavor than the rice noodles found in most Vietnamese dishes. By the fourth entrée, I had taken for granted fresh tasty vegetables because that’s how they roll at Pho Viet.

I found one dessert on the beverage menu, Che 3 Mau. I ordered it to appease my sweet tooth and to satisfy my curiousity after I read the description. Starting at the top, it had layers of creamy coconut, green jelly cubes, sweet mung bean paste, and at the bottom, red beans, making a colorful, multi-textured, mildly sweet dessert.

Also from the beverage or Giai Khat menu, we sampled Nuoc Mia Tuoi and Xoa. The former, pure sugar cane juice, was overly sweet, no surprise, yet somehow refreshing, a contrast to the hot condiments we had used to drench our food. Our server explained they start with the sugar canes, cut them into short lengths, then, put them through a machine to extract the juice.

The second beverage, Xoa, was a mango smoothie, another antidote to spicy, and defined what a smoothie should be: thick, rich, full of mango flavor, with a fat straw to suck it up.

I can’t properly pronounce the foods I described, though I spelled them correctly, but I can say I’m glad I trekked to South 27th, twice, to eat some authentic Vietnamese food at Pho Viet. 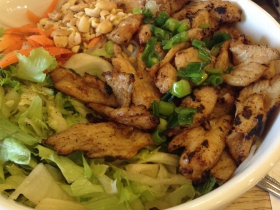 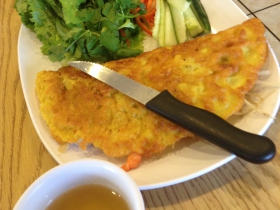 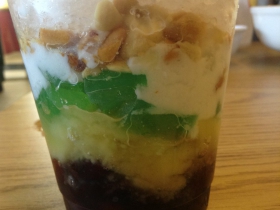 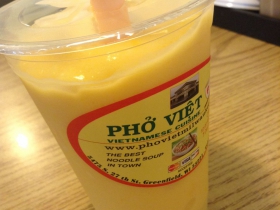 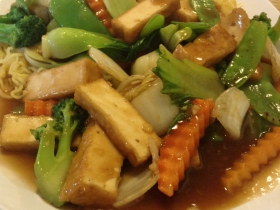 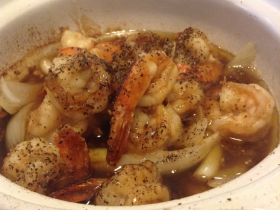