Can Milwaukee Win The Amazon Challenge?

If a lower cost of living for employees is a key criteria. 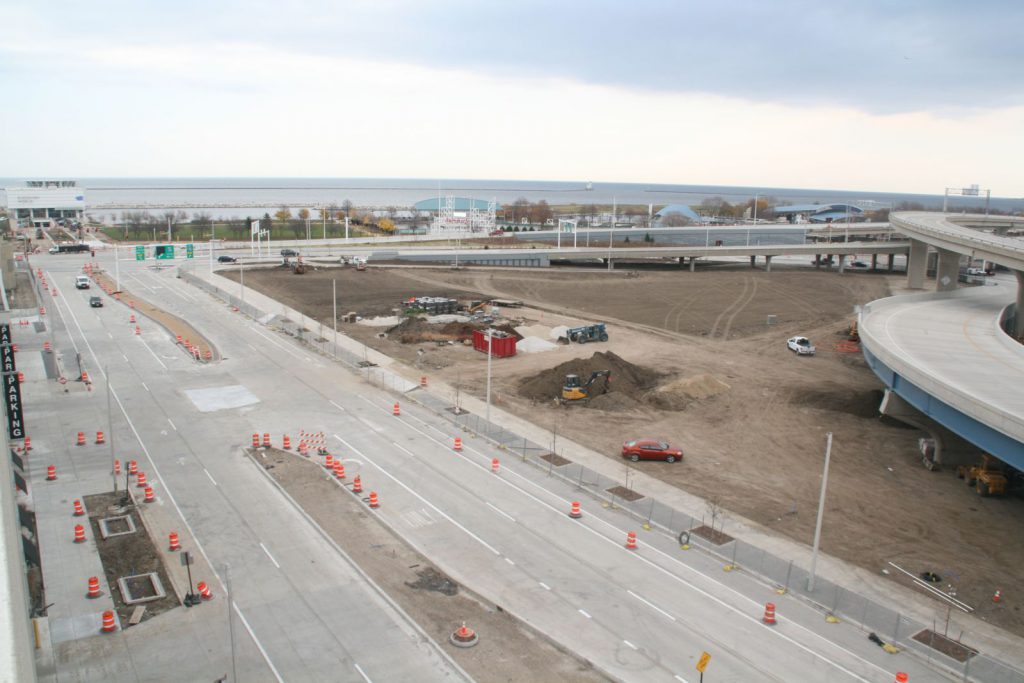 Amazon’s request for proposals (RFPs) from cities, states, provinces, and other government entities desiring to host its second headquarters (“HQ2”) has generated a flurry of press speculation attempting to guess the winner. Sadly perhaps, Milwaukee did not make the cut on any of these I have found. In this column I look at reasons why—and why not—Milwaukee could be a viable candidate. Next week I consider whether winning would be a good thing for Milwaukee and Wisconsin.

Amazon asks for proposals on behalf of entire Metropolitan Statistical Area (MSA) so long as their population exceeds one million. With 1.6 million residents, Milwaukee is one of the smaller metros. Besides Milwaukee County, the Milwaukee MSA includes Waukesha, Ozaukee, and Washington counties. The RFP asks for sites within 30 miles of the population center, ruling out any site west of Delafield or north of Port Washington.

Some argue that Amazon’s RFP is a sham. With its considerable command of data analysis, in this view, Amazon already knows where it wants to go. By not tipping its hand and appearing to be open to a wide variety of sites and metro area, Amazon puts pressure on the metros to sweeten their financial offers. As next week’s article will discuss, Amazon has become very skilled at mooching off governments.

Others have suggested that Amazon will choose a site in Trump country for political reasons. Due to Amazon CEO Jeff Bezos’ ownership of the Washington Post, President Trump has threatened to crack down on Amazon.

Three New York Times journalists, under the cheeky title: Dear Amazon, We Picked Your New Headquarters for You, applied a series of screens to the 55 or so MSAs with over 1 million residents to narrow the field. Eventually, they narrowed the list to four metros and, finally, Denver.

Others came up with other lists, using different criteria. A Brookings analysis came up with 20 cities based largely on the strength of their talent pool. A Bloomberg columnist’s list has five cities also based on the ability of the local labor force to accommodate Amazon’s needs. One article in CityLab suggests that while the coastal cities have the capacity to accommodate Amazon, they already have high costs, and suggests Chicago. A second CityLab article suggests six cities with their pros and cons. Finally two columnists in Amazon’s hometown paper, the Seattle Times, have predictions here and here. As with the Times article, Denver appears on a number—but not all–of these lists.

While Amazon says it open to both urban and suburban sites, its pride in the urban atmosphere of its Seattle headquarters is clear:

Amazon has been a catalyst for development in downtown Seattle with an abundance of restaurants, services, coffee shops, and for the redevelopment of South Lake Union and Denny Triangle with its sustainable buildings and open spaces. 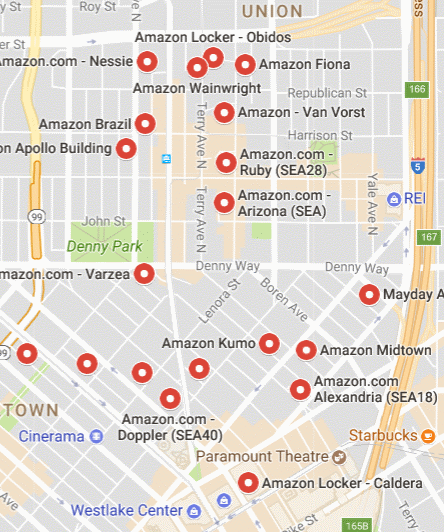 To give an idea of Amazon’s impact on Seattle, here is an image from Google maps of the area just north of downtown Seattle. The red circles mark Amazon buildings.

Given that Amazon and Seattle seem made for each other, why doesn’t Amazon just keep adding to its Seattle headquarters? Although Amazon does not spell out its reasoning, Seattle has become a very expensive city. Among the causes of escalating housing prices are Amazon and its 40,000 Seattle employees. They are also victims of high living costs. Amazon also takes credit for the growth of Fortune 500 companies’ Seattle engineering/R&D centers from 7 in 2010 to 31 in 2017.

Amazon reports that its average pay in Seattle and at the new headquarters would exceed $100,000. Even this quite lofty pay doesn’t go very far in Seattle. According to the Sperling’s Best Places website, Seattle’s $100,000 is equivalent to a Milwaukee salary a bit under $50,000. Another way of looking at this is that an Amazon employee transferring from Seattle to Milwaukee would see the equivalent of a $110,000 raise.

Aside from cost, quality of life depends on many different things, many subjective. For a potential employee who wants to spend his or her free time in the mountains, there is little Milwaukee can do to compete with the Cascades and the Olympics—or the Rockies if Denver is chosen. While the Kettle Moraine has its own appeal, it is not the same.

Aside from scenery, moderate weather is an asset Seattle and the Northwest are known for. Seattle enjoys cool summers and temperate winters, as shown below. By comparison, Milwaukee has colder winters and somewhat warmer summers. 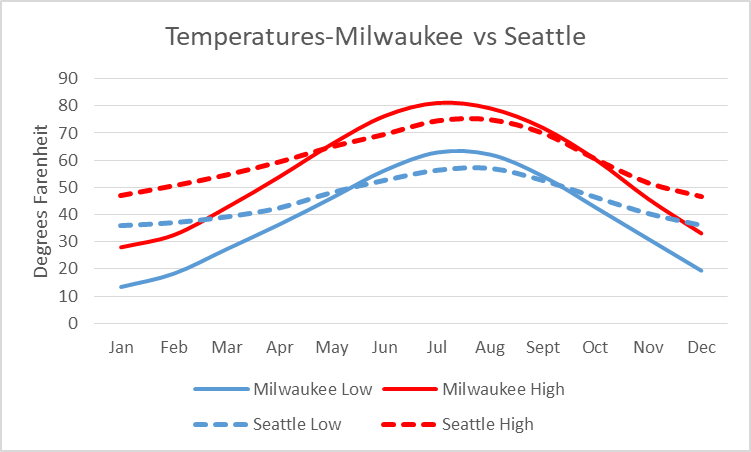 While the Pacific Northwest is famous for rain, Seattle’s total precipitation is not notably different than Milwaukee’s. The difference is in timing. Seattle’s rain comes mainly in the winter. This helps explains the Northwest’s current problem with forest fires, one that will likely worsen with global warming. 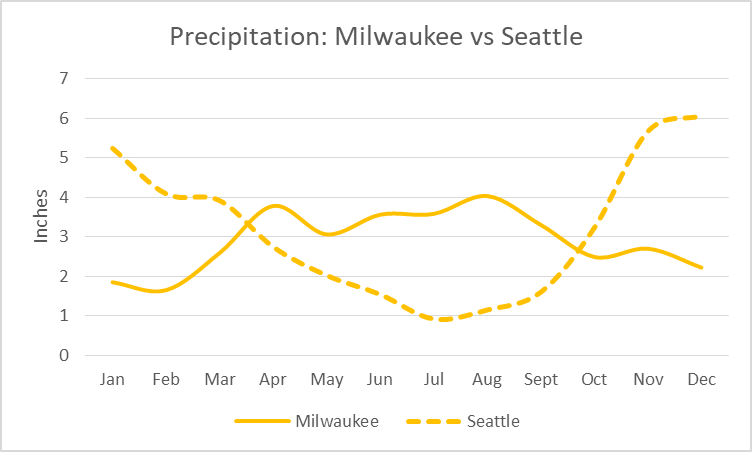 This brings up the issue of the relative vulnerability to global warming. As the earth heats up, expect more fires in the Northwest. In addition, the mountain snowpack will decline, threatening cities’ water supply. By comparison, Milwaukee is likely to have warmer winters and so far, at least, summers have not become noticeably warmer. The warmer winters, while reducing cross-country skiing opportunities, are generally considered a good thing.

Compared to Seattle, Milwaukee falls short in both walkability, although compared to the typical American city it does quite well. Milwaukee is rated “somewhat walkable” versus Seattle’s “very walkable.” However, some neighborhoods in Milwaukee are up there with the best Seattle neighborhoods, suggesting that Amazon employees who value a walkable neighborhood can find it, and at a far lower price.

The Amazon RFP asks applicants to demonstrate a “stable business climate for growth and innovation.” Several of the writers speculating on which metro Amazon will pick took this as a requirement for past growth. As the next chart shows, net jobs in the Milwaukee MSA have been essentially flat since 1990, compared to strong overall growth in Seattle and Denver—identified by a number of writers as a leading candidate for HQ2. 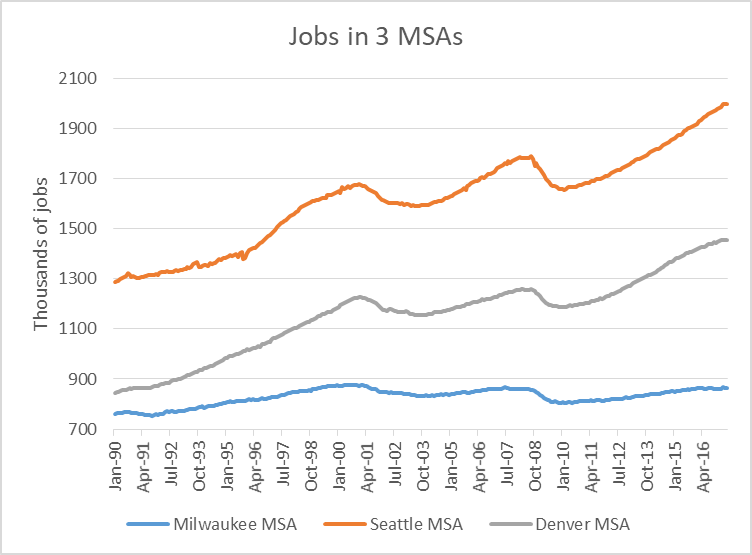 The next chart shows jobs in information technology for the same three metros. The Milwaukee area saw a decline in these jobs. By contrast, Seattle saw strong IT job growth. Early on, Denver closely tracked Seattle in information jobs until it was clobbered by the “dot-com” collapse. The difference probably says less about the cities themselves than the relative fortunes of firms starting in Seattle and Denver. 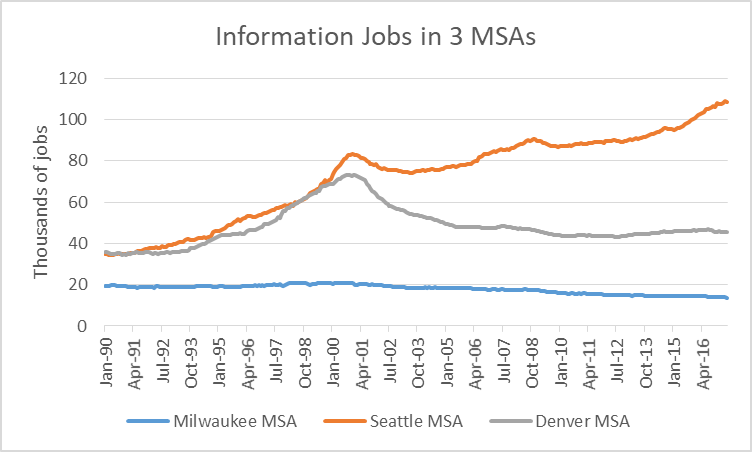 The argument that Milwaukee is a viable candidate for Amazon’s HQ2 runs something like this: Amazon has concluded that its impact on Seattle needs to be capped. In particular it has already helped drive up housing prices to the point that are unaffordable to many of the people it wishes to attract. Milwaukee has many of the features attractive to the kind of employees it needs to attract—including older, walkable neighborhoods, interesting restaurants, and improving bicycle facilities—and those missing can be fixed. Rather than looking for a city that looks like Seattle today—and accepting the resulting high housing prices, it makes more sense to look for the equivalent of Seattle in 1994 when it started, not Seattle today.

The question is whether choosing a city like Milwaukee will adversely affect its ability to attract the kind of employees it needs. Does a Milwaukee location make doing so more difficult—or do much lower housing costs compensate for a lower “coolness” factor? Some time ago I reported on research by Cushman and Wakefield on parts of cities—including Milwaukee—that were particularly attractive to talented millennials.

9 thoughts on “Data Wonk: Can Milwaukee Win The Amazon Challenge?”