He's met countless celebrities, and now has become a little famous himself. 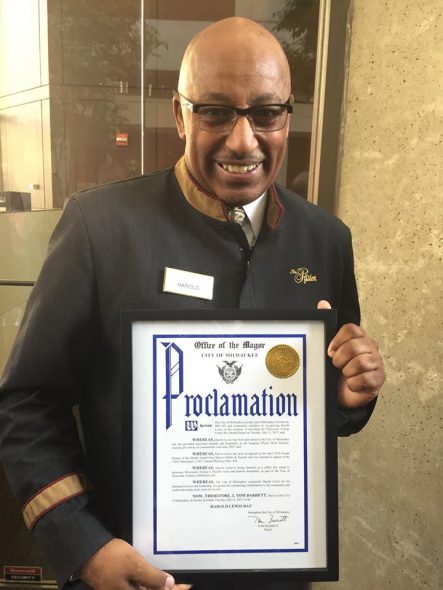 For 11 years, Harold Lewis has been the Pfister Hotel’s Lobby Ambassador, Bellman and Valet Captain, and his outgoing personality, contagious smile and hardworking style has caught the attention of many. He has become one of the most well-known bellmen in the city, so well-known that the city celebrated him, with Mayor Tom Barrett declaring July 11 to be Harold Lewis Day.

Lewis has meant countless politicians, like former Senator Herb Kohl, Barrett and many others. “The number of important dignitaries are too numerous to mention,” he says. And lots of sports stars from visiting teams; he is also the hotel’s liaison for all NBA and MLB teams. “Depending on the time of year, during the summer, I’ve met players from teams who are playing the Brewers, and in the fall season, players who come to play the Bucks.”

But he prefers not to name names. And famous or not, he tries to make every visitor to the hotel at home. “For people coming into the hotel, I want them to feel like they’re walking into a warm and friendly atmosphere type place and I’m going to do everything I can to go out of my way to ensure they have an enjoyable stay, whether they’re returning guests or if it’s their first time here.”

Among other duties, Lewis accommodates special requests from guests with unique needs and follows up to ensure satisfaction.“I see myself as a positive individual and I believe in surrounding myself with positive and energetic individuals,” he says.

One issue he handles is the periodic concern that the Pfister Hotel is haunted. The stories of this go back decades and many guests ask him about that. “There have been some guests that have claimed there have been abnormalities going on in their room,” says Harold. “Late night, either their TV would randomly come on or a light would come on; but nothing more dramatic than that.”

Harold says that in the years that he’s been at the Pfister, he’s never witnessed anything supernatural himself.

Prior to his position at the Pfister, Lewis worked for 17 years for the Milwaukee Bucks as the team’s liaison with hotel management and bellmen regarding travel departures/arrivals, check-ins/check-outs, and handling the team’s luggage delivery and pickup. He also provided timely player transportation from hotels to practice sessions and assisted the team with public events.

“One time when I was with the Bucks, we had the opportunity to go to the White House, at the time it was President Bill Clinton so I got a chance to meet him and we all took a picture with him.” It’s a memory Lewis says he will always cherish deeply. 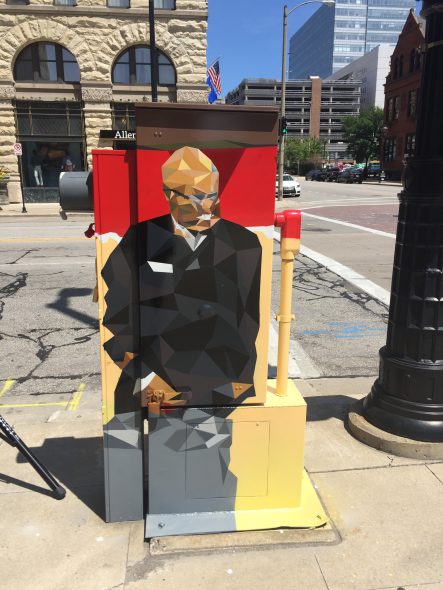 The celebrity greeter has become something of a local celeb himself. He was a model in the Boston Store’s spring catalog. He was chosen by artist Mauricio Ramirez to be one of the models for the series of 10 utility box murals on Wisconsin Avenue commissioned by the downtown Business Improvement District. Lewis says Ramirez would come in occasionally to the café in the hotel and grab a cup of coffee and must have noticed Lewis’ friendly demeanor. Another one of the murals features the architect who designed the Pfister back in the 1890s, Henry C. Koch, so Lewis is in some heady company.

As for that city proclamation, it was a complete surprise to Lewis. The proclamation recognizes Harold for being one of Milwaukee’s leading spokespersons and for welcoming hundreds of visitors to this city to each day.

“I don’t think it’s fully sunken in yet,” says Lewis. “I still pinch myself every day when I go home and look up at the proclamation on the wall.” Lewis says he’s very humbled by it and very appreciative. His family kids him about it, asking how their local celebrity is.

Guests who are visiting Milwaukee for the first time always ask him for recommendations on what to do and where to go.  His answer? “It depends on what our guests want to do. Many people like to walk up and down the lake front. You also have the art museum, you have Discovery World, you have Veterans Park, you have the War Memorial. If they want a nice bite to eat or do a little shopping we’ll send them down toward the Third Ward area, especially Café Benelux and the Public Market.”

For Lewis the best part about Milwaukee is the ever-changing seasons. “In Milwaukee we have such diverse weather, and you never know from day to day what our weather is going to be like.”

As for any future goals, Lewis hopes to “continue to grow as a person and continue to represent the Pfister hotel in a positive way.” And he wants an even bigger work load, it seems —  “to have more and more people come and stay with us.”