The late great singer was in Tony Bennett’s class as a live performer. 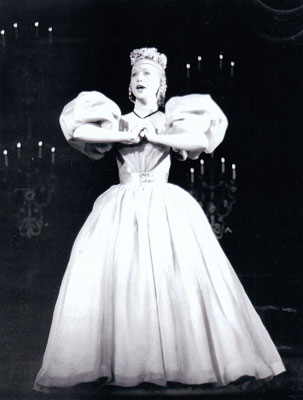 Thank God for YouTube! Were it not for this time machine open to all on the Internet, there would be generations that could never understand the self-transformation of Barbara Cook and why she earned legendary stature in vocal artistry.

At age 89, Cook died August 8 of respiratory problems – and that was only six years after being honored by her nation and today’s most famous Broadway divas at the Kennedy Center honors, with then President Obama and first lady Michelle watching.

It was two distinct careers that brought Barbara Cook that prominence. The second evolved after a decade of what she describes as a broken marriage and alcoholic slovenliness. The brilliance of her return in the late seventies, at an age when most singers expect a downward arc in their careers, has added to the awe. She battled poundage all her later life, but decided that artistry conquered weight, and she knew how to control the artistry.

YouTube lets us dip into both worlds of Barbara Cook. The first is the sudden and almost unbelievable way she captured Broadway in the 1950s and 1960s with a lyric soprano that combined clarity and delicacy with an attractive, perky farm-girl naturalism and the power to pin audiences to the back wall.

Composers were aghast and clamoring – including Rodgers and Hammerstein for revivals of Oklahoma and Carousel. Without subscribing to special music services, YouTube has excerpts from several original cast albums including “I’ll Show Him” from “Plain and Fancy.”

Perhaps most enduring is the high standard she set in a box office flop that is now regarded as a virtuoso showcase, Leonard Bernstein’s Candide in 1956. Under Bernstein’s direction, Cook originated the role of Cunegonde and its ungodly difficult “Glitter and Be Gay.” It demands a flair for comedy and for impossible coloratura trills isolated at Bernstein’s insistence note by note, something like cough by cough.

Musical training has advanced in 60 years, so teachers offer “Glitter and Be Gay” where most singers in the 1950s wouldn’t dare, some of today’s singers can and most really ought not try. Singers escape by camping up the comedic elements and sliding by the singing. (In my experience, only Kristen Chenoweth seems to combine the ham and vocal power to carry it off as something casual).

During this early period Cook leaped to fame as the original Marian the librarian in The Music Man opposite Robert Preston. Her original album greatness can be found, not only in a duet with the Buffalo Bills but also “Goodnight My Someone” and “Till There Was You.”

She was so good and so appealing she was considered by Hollywood for the 1962 film. Typically producer Jack Warner wanted stars —  Cary Grant instead of Preston. But Grant violently declined, so the movie celebrity as well as singing attention went to Shirley Jones. YouTube has a Bell Telephone Music Man medley by Cook that may also have served as Hollywood audition in 1960. No offense to Shirley Jones, who can sing and acted the part notably well, but Cook would have sung it better.

In the 1960s she was still in demand, originating the lead in She Love Me, a musical recently revived on Broadway, live-streamed on the Internet and moved to London. (She has revisited the music on her concert tours.)

By the late 1960s and throughout the early 1970s, as she has related, the bottom dropped out of her marriage and her self-confidence, finally resurrected in the late 1970s by pianist Wally Harper, now deceased.

Her voice may have darkened somewhat over time but if anything increased its power and Cook now turned to the cabaret world and a masterful ability with lyrics. She now preached getting inside the lyrics and the mood as essentials. The big and gentle voice was still there. It requires, of course, the sort of vocal talent she has, to dip and soar at will, combined with the life experience she earned to know what the composer was trying to say and how to say it.

“Masterful,” incidentally, is no hyperbole because premier music schools such as Juilliard turned to her to teach master classes to their professionally-minded students. Since appearance or sex appeal matters so much in popular culture, her artistry has been limited to cabarets, Broadway appearances and in these days of music services, audio listeners everywhere.

Her albums drew more fans as did her Carnegie Hall concerts in 1980 and 2006,  along with a PBS hour from the 1980s still rousing on You Tube.

Believe me, we are not exhausting YouTube on Cook selections, plus you can learn more if you like reading — it was only last year that she co-wrote her life story: Then and Now: A Memoir. Or you can hear the other famous singers pay tribute to her repertoire.

But on her own, learn how smooth and easy she was with Gershwin and why so much of her fame stems from status as the definitive interpreter of Sondheim. She became central to his Broadway musical showcases even into recent years.

I can only think of two singers who have had such live performance impact over 70 years and they are quite different except for work ethic and determined self-improvement  – Tony Bennett, who still performs, and Barbara Cook, who remains alive to me because of the Internet.