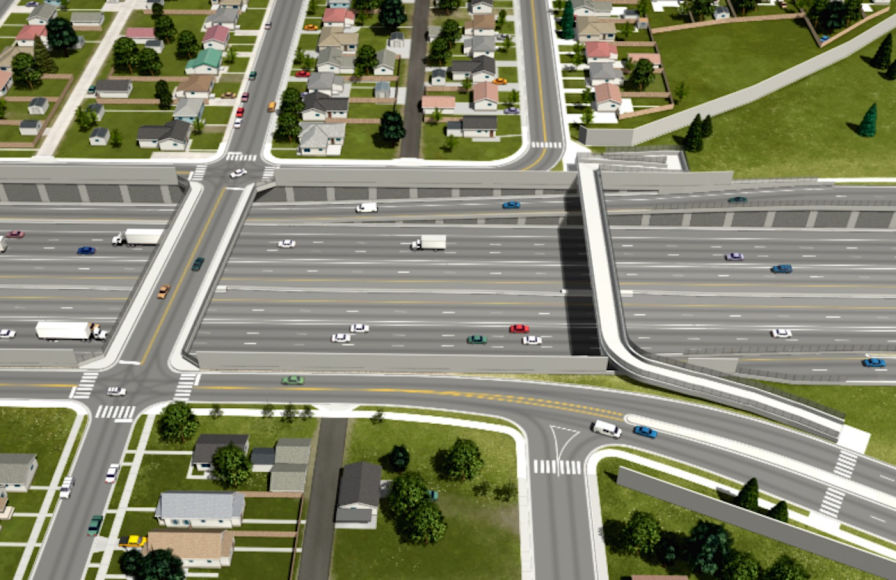 Expansion of Denver’s I-70 freeway. Rendering from the Colorado DOT.

Denver’s new redlining: An expansion of Denver’s I-70 freeway would condemn 56 homes and 17 businesses in an urban neighborhood that is primarily the home of people of color. Drainage plans would also put homes in the 100 year flood plain, making them ineligible for home loan insurance just like the redlining of decades past in which the Federal Housing Administration denied home loans to primarily black neighborhoods. (The Nation)

Dan Savage on cities: Seattleite and sex columnist Dan Savage talks with The Urbanist about the importance of cities for environmentalism and social connection. He also discusses the need to embrace cities as a counter argument to the hymn of “real America”. (The Urbanist)

Elite projection in transportation planning: Among influential segments of society, there is a propensity to lobby for programs that would benefit themselves in the belief that it would benefit everyone. However, these influential elites are a minority population, and Jarrett Walker argues that planning transportation networks around the needs of the minority does not benefit either the majority or even minority population. (Human Transit)

Fast food inequality: Obesity is a modern epidemic in the United States stemming in part from our diets and activity. But it’s also connected to poverty, and historian Chin Jou writes in his new book that this connection could be traced back to the federal government intervening in fast food expansion by subsidizing chains such as McDonalds to enter new markets in support of “black capitalism”. (New Republic)

Lessons from Jakarta’s carpool lanes: Jakarta, Indonesia is mired in traffic, and in 2003 debuted car pool lanes that would require three riders per vehicle in the central business district. The lanes existed until 2016 at which point they were discontinued because no one thought they were working. But using data from Google’s maps API from before and after, researchers at MIT found that after cessation of the lanes, average delay in the evening peak period increased from 2.8 to 5.3 minutes per kilometer. (Guardian Cities)

It struck me. Half my revenue for transportation capacity and operations improvements is based on a parking model that may be obsolete in a dozen years.

-City of Austin Transportation Director Rob Spillar on what self driving vehicles could do to his budget. (Governing Magazine)