Deal will cost $500 for every person in the state.

For all its limitations, the free market does a pretty good job of allocating resources, particularly if all the costs and benefits are taken account of. The promised $3 billion subsidy from Wisconsin taxpayers to Foxconn represents a massive intervention in the private sector. Thus it appropriate to examine whether its benefits outweigh the costs.

Although the FoxConn subsidy dwarfs previous ones, it is hardly the first of its kind in Wisconsin. The Wisconsin Democracy Campaign lists previous recipients of Wisconsin tax credits (under both the Doyle and Walker administrations) and compares them to the political contributions from employees of these companies. (I did not include $286,000 from the owners of Uline to Scott Walker; including it squeezes the vertical scale sufficiently to make the other donations disappear.) 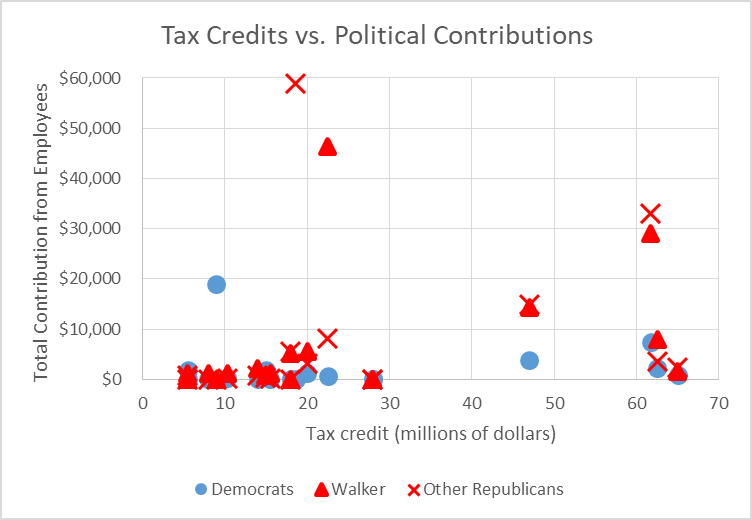 Such targeted tax credits are often derided as “corporate welfare.” For example see this list of handouts from the libertarian Beacon Center of Tennessee. “Since 2005, Tennessee governments have spent $3 billion on corporate welfare for 470 companies. The center calculates that only 3% of Tennessee’s 170,000 businesses have benefited from the state’s largesse.

There are several reasons to be concerned about such corporate welfare. One is that reduces the funds available for other activities. For example, a 2015 revision to the Governmental Accounting Standards, called GASP 77, “requires disclosure of tax abatement information about (1) a reporting government’s own tax abatement agreements and (2) those that are entered into by other governments and that reduce the reporting government’s tax revenues.”

A second concern is that targeted tax abatements redistribute income upwards–from middle income taxpayers to wealthy owners of companies. From the taxpayer viewpoint, a contest between states to see who can offer the highest subsidy is a negative sum game.

Finally, such targeted tax subsidies raise the prospect of pay to play, the belief among business that a political contribution to elected officials may improve the chances of getting a subsidy. This is implied in the connection that the Wisconsin Democracy Campaign makes between political donations and the tax credits. I am confident that, if pressed, all the donors would protest that they were only motivated because they agreed with the candidate on the issues. Yet it is worth noting that from an investment viewpoint the return is extremely attractive; on average, the donors got back $821 in Wisconsin tax credit for every dollar they contributed. It is hard to believe that every one of the contributors ignored this calculation.

In addition to tax credits targeted to specific companies, Wisconsin has phased in a tax credit aimed at two business sectors: manufacturing and agriculture. In a memo released earlier this year, the state Legislative Fiscal Bureau estimated the cost of the tax credit, as shown below. Since its start, the tax credit has cost state government $767.4 million in lost revenue and is now set to cost in excess of $300 million per year. 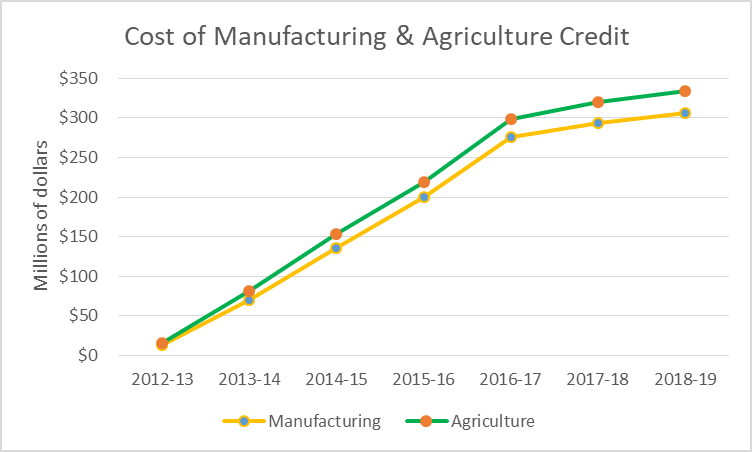 In a separate memo, the LFB calculated which individual returns received the bulk of the credit. 92 percent of the benefit went to individuals making over $300,000. 10 percent went to eleven taxpayers.

These subsidies to very wealthy individuals came at a time that state aid for Milwaukee and local governments was being cut, leading to increased local property taxes and fees, the only other funding sources available. Did these costs at least lead to increased manufacturing employment? 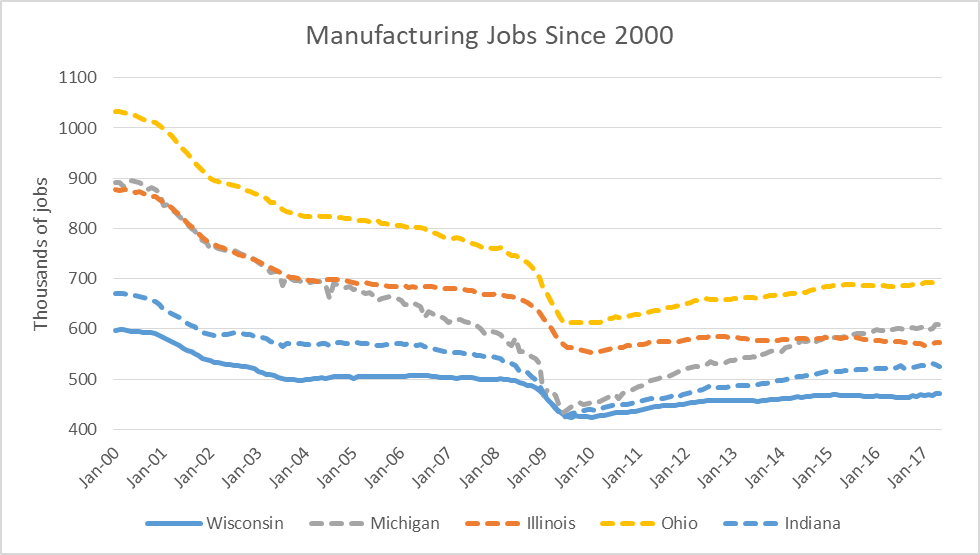 Since the recession manufacturing jobs have either stabilized or grown modestly, as the next graph shows. This is also the period when Wisconsin’s manufacturing tax credit phased in. Based on these data from the Bureau of Labor Statistics, it is very hard to spot a jobs effect of the manufacturing credit. To argue that it had a significant effect one must believe that without the credit, Wisconsin would have lagged even further behind its neighbors. 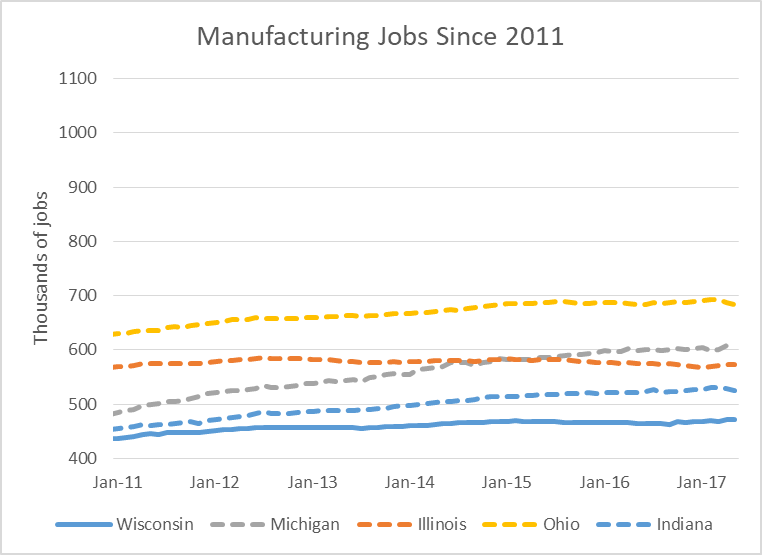 In fact, as shown on the next graph shows, data from the Bureau of Labor Statistics contradicts the WMC’s claim. It shows average hourly wages for manufacturing workers in the five Great Lakes states. I adjusted the data so that they are shown in 2017 dollars. Wages in all five states appear to be converging at $20 per hour. This is roughly equivalent to $40,000 per year, ignoring overtime. 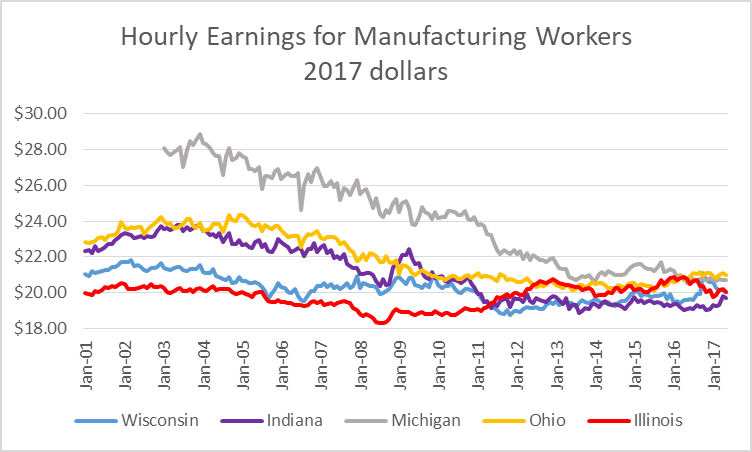 The deal with Foxconn has stunned many in the business world. For one thing, the announced cost of $3 billion works out to $500 for every man, woman, and child in Wisconsin. In addition Foxconn’s taxes would already have been eliminated by the tax credit for manufacturing and agriculture. Rather than paying taxes, Foxconn would receive an estimated payment of $300 million per year from Wisconsin taxpayers.

The richness of the offer to Foxconn likely reflects the relative strengths of the negotiators. Governor Scott Walker, President Donald Trump, and Representative Paul Ryan all needed a win, something they could point to as creating jobs. Being unable to walk away from a deal puts one in a weak negotiating position.

Foxconn’s record of coming through on their commitments is spotty at best. As has been widely noted, it has announced a number of plants that were never built, including a $30 million plant in Pennsylvania. The picture below, taken a few days ago from Google maps, shows Foxconn’s Pennsylvania facility. As Crain’s Detroit comments: “But it needs to be noted that Foxconn Technology Group, formally Hon Hai Precision Industry Co. Ltd., has a history of big promises with little to no payoff in the United States.”

Among the unknowns is to what extent the Foxconn facility would alleviate the persistent poverty in parts of Kenosha, Racine, and Milwaukee. Presumably hiring at the Uline and Amazon facilities would throw light on this question, but so far as I can tell no one has looked into the question.

Reports in the Journal Sentinel indicate that legislation authorizing the tax credits would also exempt the project from wetland and other environmental regulations. If true, this would be a very disturbing precedent.

As more information becomes available, including the actual text of any agreement and the solidity of Foxconn’s commitments, these and other issues need to be explored.

More broadly, does the Foxconn plant, as planned, move Wisconsin in the direction it needs to go? Although Walker has taken to calling the project “Wisconn Valley,” suggesting a new Silicon Valley in Southeast Wisconsin, it seems to have more in common with the rust belt strategy of huge factories. By investing so heavily in one employer, it recreates the vulnerability that devastated Wisconsin and its peers along the Great Lakes, and left the region without the flexibility to respond to changes in the economic environment.