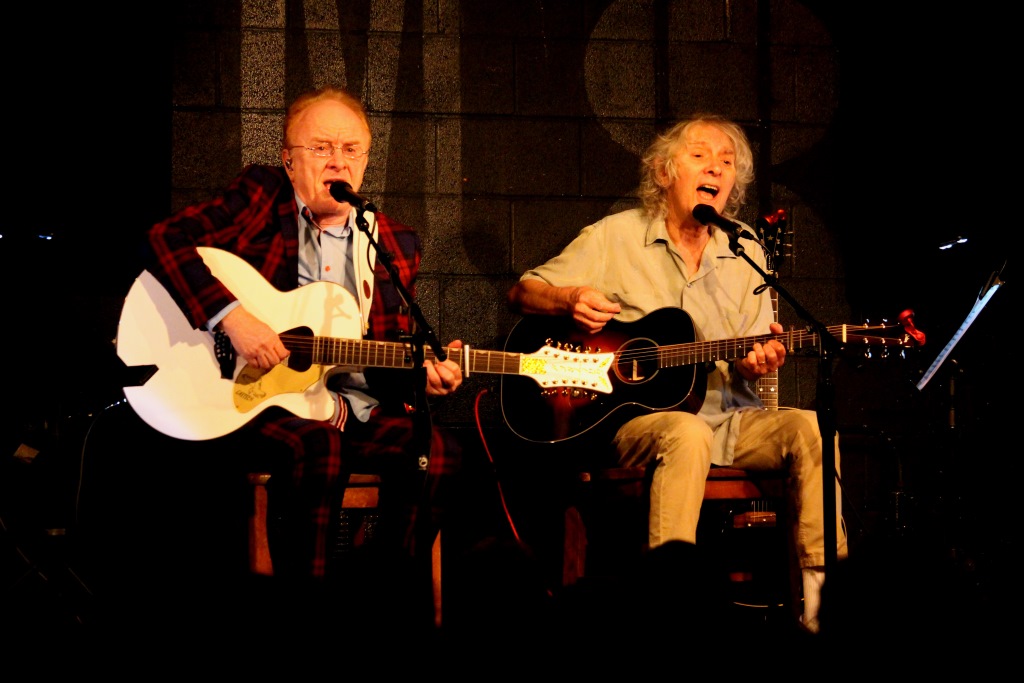 Life is a funny thing. You could be sitting next to someone in a park or at a concert and not realize you’re rubbing shoulders with greatness.

Take Peter Asher and Albert Lee, who are two of the most influential, talented and respected men in the world of music. Asher was in the vanguard of the British Invasion as a member of the vocal duo Peter & Gordon. Paul McCartney wrote four hits for Peter & Gordon, and he also lived in the Asher family home in the mid-1960s while dating Peter’s sister, Jane Asher.

Yet many today wouldn’t know who they are.

“There’s no reason for people to know who we are these days, no reason for them to have done that research,” Asher explained via telephone in an interview in advance of their show at Anodyne Coffee Roasting on Sunday at the Bruce Street location.

Asher first heard McCartney and Lennon perform “I Want to Hold Your Hand” in Asher’s house. “Shortly after Paul had moved in, John came over, and Paul stuck his head up the stairs and asked me if I wanted to come hear the song that they’d written,” Asher says. “They sat side by side on the piano bench and played “I Want to Hold Your Hand” for the first time to anybody anywhere.”

He teamed up with Gordon Waller in the early 60s to form Peter and Gordon. Waller died at the age of 64 in 2009.

The first song McCartney gave the duo was “A World Without Love.”

“It’s a great song,” Asher says. “It was an unfinished, an orphan song. The reason the Beatles didn’t do it was that John thought the first line was laughable. “Please lock me away…”  Yet “A World Without Love” was the first British No. 1 (in America) after the Beatles. Not bad for a McCartney discard.

“It became this whole British Invasion,” Asher says, “which of course we were thrilled to be part of. But of course in essence it was 90 percent Beatles and 10 percent everybody else put together.”

Another hit for Peter and Gordon, “I Go to Pieces,” was written by Del Shannon and given to Peter and Gordon after the two acts toured together. They also hit the charts with other songs written by McCartney, including “Nobody I Know” and “I Don’t Want To See You Again.” Although McCartney wrote the songs, they were jointly credited to him and John Lennon, as was all their work at the time. Peter and Gordon also performed as themselves in a slew of TV series in the 60s.

“The music out of New York, Memphis, Los Angeles and Nashville took our breath away. I used to see the Rolling Stones once a week,” Asher says. “They were experimenting with so much material. We saw Muddy Waters, Bo Diddley, all that stuff. It was challenging to find new American songs people in Britain didn’t know. We learned songs, loved songs, then sold it back to the United States.”

Asher then headed A&R for The Beatles record label, Apple. It was then he discovered and signed an unknown singer named James Taylor. The musician followed a girlfriend to London after Taylor’s band The Flying Machine broke up.

“Everything about James Taylor was unique,” Asher says. “His guitar playing was extraordinary. Jazz based. His voice was extraordinary. Here’s a guy that looks like a folk singer but arranged some complicated music. “Something’s Wrong,” and “Something in the Way She Moves.” The opening line to the latter song inspired George Harrison to write the #1 Beatles’ song “Something.”

Asher later played with many artists, including Linda Ronstadt, an artist he later produced. “As a producer, I always made a point of listening carefully to the artist. After all, it’s all about what they want to accomplish.” As a manager, Asher has worked with Bonnie Raitt, Cher and Randy Newman, Billy Joel, Diana Ross, Ed Sheeran and others.

He remains the only Artist Manager to be featured on the cover of Rolling Stone magazine, and his studio work has led to two Grammy Awards for Producer of the Year.

He talked about how the youth in Britain at the time was enamored with everything America.

“We came out of a post war, grim, food rationing environment,” Asher says. “We looked at the United States as a world of plenty. The America we saw in movies.”

Asher’s voice has held up through the years, and at 73 it shows no sign of diminishing. “It holds up reasonably well,” he says. “I’ve had some occasional trouble. Never smoked. Can’t say the same for other vices.”

His partner on this tour, Albert Lee, is one of the most respected guitarists in the world. Eric Clapton calls him the ultimate guitar virtuoso.

“I’ve always been a fan of Albert’s,” Asher says. “He’s on everyone’s Top 10 guitar players list, at the very least—and a terrific singer, which a lot of people don’t know. We did a couple benefits on the same bill, and out of curiosity tried playing together, and it was really cool.”

Lee has done studio and stage work with Vince Gill, Roseanne Cash, Dolly Parton, Willie Nelson and Bill Wyman’s Rhythm Kings. Even with all this, he found the time to record 10 solo and band albums. His work has led to four Grammy Awards nominations and two awards.

Lee and Asher only started playing together a couple of years ago after their managers encouraged them to work as a duo after they teamed up for some songs at a Buddy Holly Birthday Bash.

Despite decades of acclaim, Asher remains humble about his own musical talents and jokes about Lee’s superiority as a guitarist.

“Albert is such a good guitar player people tend to overlook what a good singer he is,” Asher adds. “I’m just there for contrast.”

Asher says the current tour with Lee has been fun. “We’ve been fortunate,” Asher said. “We incorporate our audience into the show. We don’t have a backing band, no videos. We engage the audience and want to interact.”

One thought on “Music: The Least Known Great British Musician”