Massive cargo plane supports the Blue Angels and puts on quite the show. 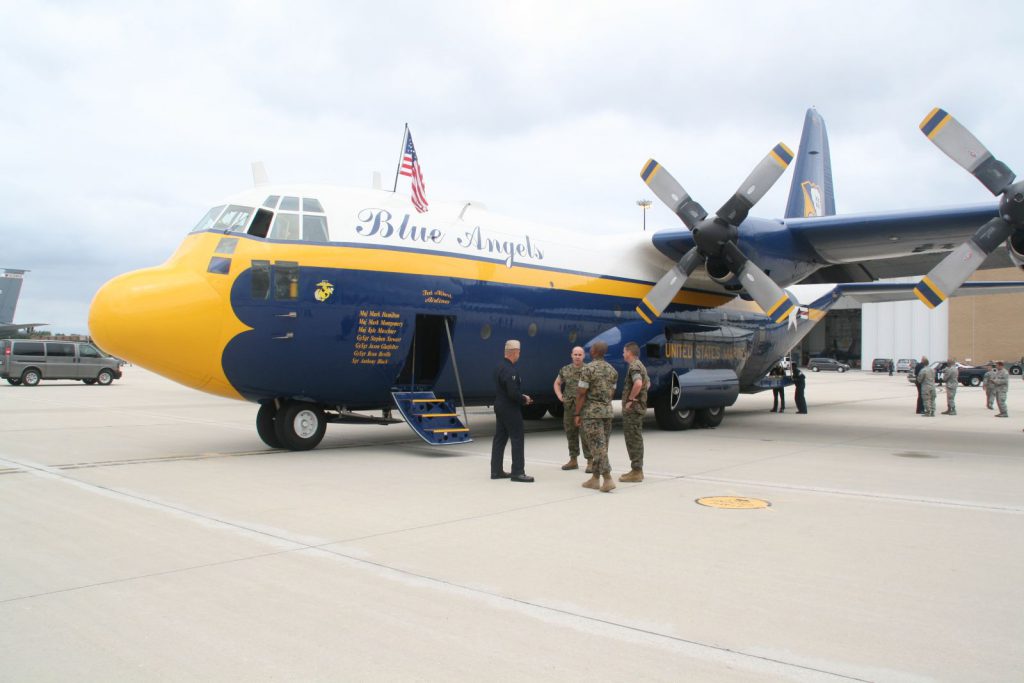 The Navy’s Blue Angels may be the marquee attraction at the Milwaukee Air and Water Show this weekend, but there is another plane that is absolutely critical to the event. Fat Albert, a C-130 Hercules cargo plane, doesn’t look anything like the F-18 fighter jets that make up the Blue Angels, but it’s no less important. While its primary function is to transport cargo and crew between air shows, the Fat Albert flight crew also performs quite the demonstration flight.

The Marine Corps flight team that staffs Fat Albert took members of the 128th Air Refueling Wing, a division of the Wisconsin National Guard, and a handful of media members up for a 10-minute flight. The plane seats 35, and virtually every seat was taken as we tossed, turned and tried to avoid having to use our “motion sickness bags.”

Fat Albert doesn’t look like something that would dazzle crowds at an air show (or make media members hurl); after all, its primary job is to transport almost 30,000 pounds of gear to up to 35 shows a year. But as Montgomery puts it, “she’s a little bit more nimble than she looks.” That’s for sure.

During the flight we were treated to a wide variety of moves that will be performed before a large audience along the lakefront this weekend. Those moves aren’t just for show, our pilot, Maj. Mark Montgomery, told us. They’re the same maneuvers used in combat zones to evade everything from radar to enemy fire. They also come with a substantial amount of gravitational force.

We were treated to a wave of sensations unknown to commercial airline passengers while we climbed to 1,400 feet and dived down to about 60 feet above Lake Michigan. We were all safely strapped in, but a handful of crew members stood in the middle of the plane. They were literally floating up into the air at various points as we experienced zero gravity for a few seconds. At other points we experienced “2 Gs” or double the normal gravitational pull on our body. It was like being on a roller coaster, but at a much faster speed and with a killer view of the Milwaukee skyline for those of us lucky enough to score window seats.

And while we got down real low above Lake Michigan (I was able to make out small details on boats we cruised above), the real treat might have been the impromptu Milwaukee neighborhood tour we took. In preparation for the “sneak maneuver” that the flight team uses to enter the air show from behind the crowd, we circled around much of the north and south side at between 500 to 1,000 feet off the ground. I was able to take in a bird’s eye view of much of Harambee, Riverwest and the East Side before we turned sideways and I found myself looking straight down at Lake Michigan. Our final descent into General Mitchell International Airport afforded a great view of Bay View and the rest of the South Side that you just don’t get while flying Southwest Airlines.

Once we were back on solid ground, with my motion sickness bag thankfully still empty, Montgomery thanked us for flying with “Fat Albert Airlines” and gave us more background on the role of this distinctive plane. The Marine Corps major was quick to note that its an honor for the crew to fly in these shows, and that the gig is only temporary. He noted “we come from the fleet, we will be back with the fleet.” The Fat Albert crew is on three-year cycles, while the Blue Angels pilots are on the squad for two-years at a time. Montgomery has plenty of experience under his belt, having spent time flying in both in Afghanistan and Iraq.

While we wrapped up a post-flight interview with Montgomery, we were given notice that we had to clear the area. The demonstration was over, Fat Albert had to head back to home base in Pensacola, Florida to pick up parts to support the F-18’s. The flight takes two-and-a-half hours each way, and mechanics will work through the night to get the planes ready for the air show this weekend. As Maj. Mark Hamilton told us in our pre-flight briefing, “we’re support and we know that.” 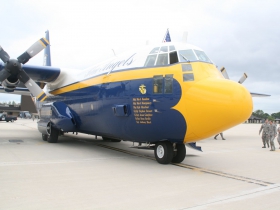 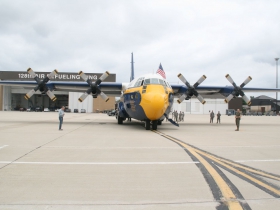 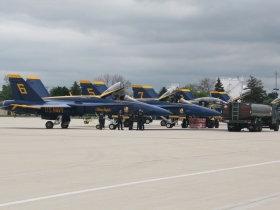 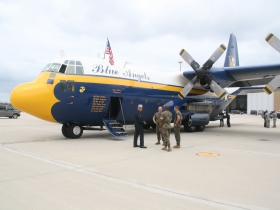 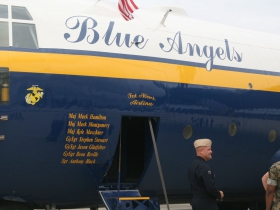 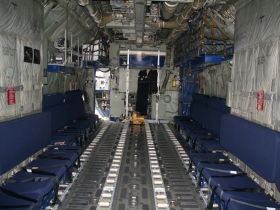 The water show begins on the lakefront just north of McKinley Beach at 10 a.m. Saturday and Sunday. The air show portion runs from noon until 4 p.m. on both days.