Who Wins From Global Warming?

Who wins and who loses from global warming? A recent paper in Science magazine explored that question. The twelve authors—a mixture of economists and climate scientists–combined models from their diverse fields to estimate the economic effects of global warming on each county in the United States. Here is how they describe their model:

The next diagram, reproduced from the paper, summarizes the net effect of global warming on the various parts of the US. The report combined research on several effects of global warming, including the percentage changes in agricultural yields, mortality, energy expenditures, labor (both indoor and outdoor), coastal effects and property and violent crime. These were then combined to get an estimate of the percent of total direct damages to each county’s Gross Domestic Product (GDP). 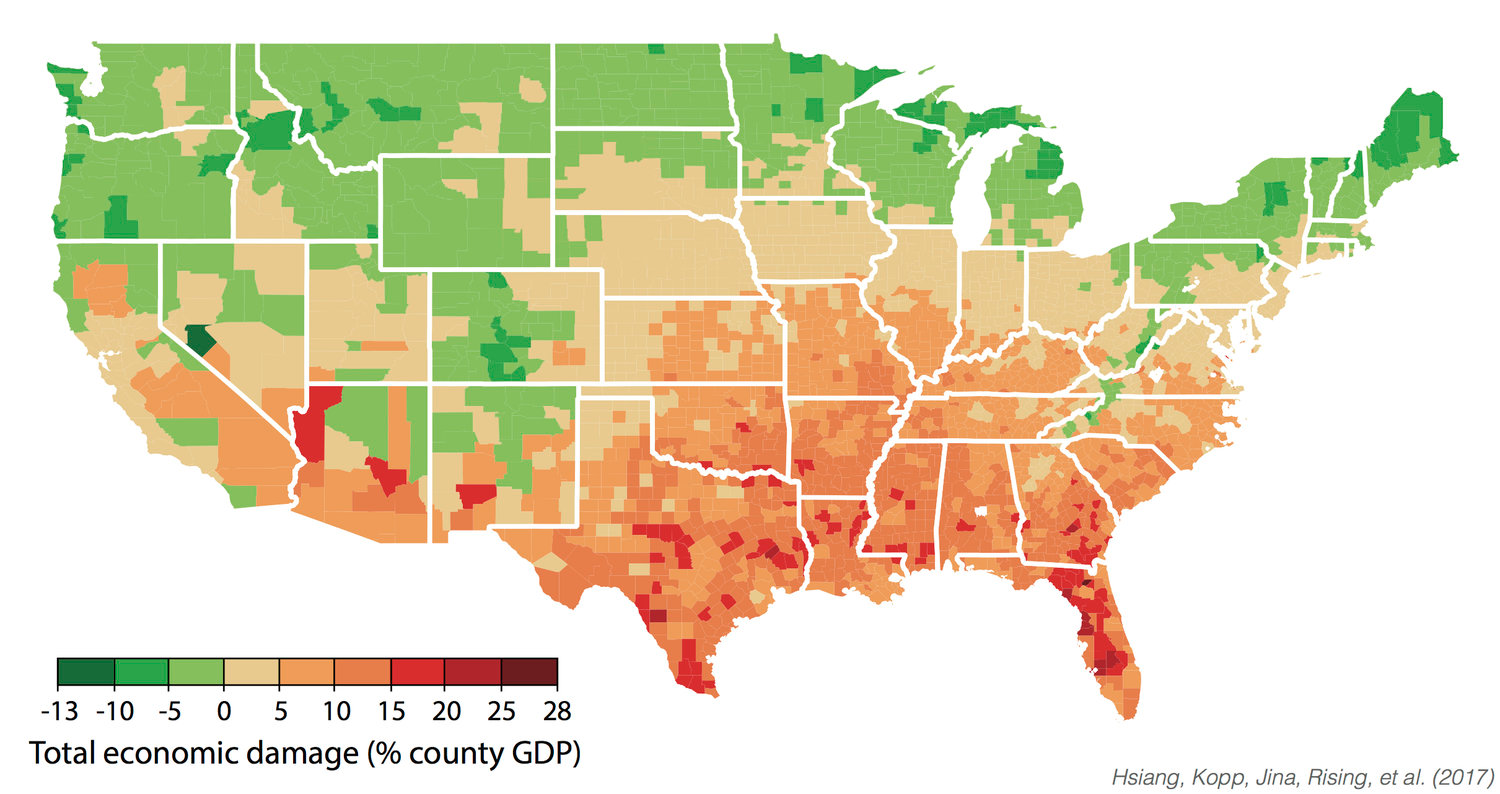 As can be seen from the map there are winners (shown in green) and losers (in red) from climate change. The scale shows the total economic damage as a percentage of county GDP. Since the colors show damage, negative values are desirable and positive values undesirable.

The costs and benefits are not evenly distributed geographically. Except for crime and some coastal damages, populations in the South and lower Midwest suffer the largest losses. Northern and western populations have smaller damages or even net gains from projected climate changes. Another way of expressing this is that warming causes a net transfer of economic value from Southern, Central, and Mid-Atlantic regions toward the Pacific Northwest, the Great Lakes and New England.

The good news for Milwaukee is that it is projected to be a net gainer from global warming, if only by a small amount (in terms of damage, by a negative 0.5 percent). This compares to the positive (i.e., bad) 3.9 percent damage nationally. This puts Milwaukee at around the 20th percentile for damage, with 80 percent of the nation likely to suffer more damage from climate change.

While global warming may bring a slight net benefit for Milwaukee, the United States as a whole loses. In addition to reducing the American economy as a whole, it would make inequality worse. As a whole the counties losing the most are already poorer than the gainers.

In political terms there is an irony to this geographic distribution. One might expect that states and regions that are likely to suffer the most from global warming would elect governors and legislators who are most supportive of efforts to reverse its causes. Yet it is clear from the most recent elections that the opposite is the case: those states likely to be hardest hit tend to elect climate change deniers.

To further explore the issue of whether political office-holders protect their supporters, I calculated the average predicted damage percentages for counties won by Hillary Clinton versus those won by Donald Trump. The Trump-won counties are substantially more vulnerability than those won by Clinton, mostly reflecting their preponderance in the South. 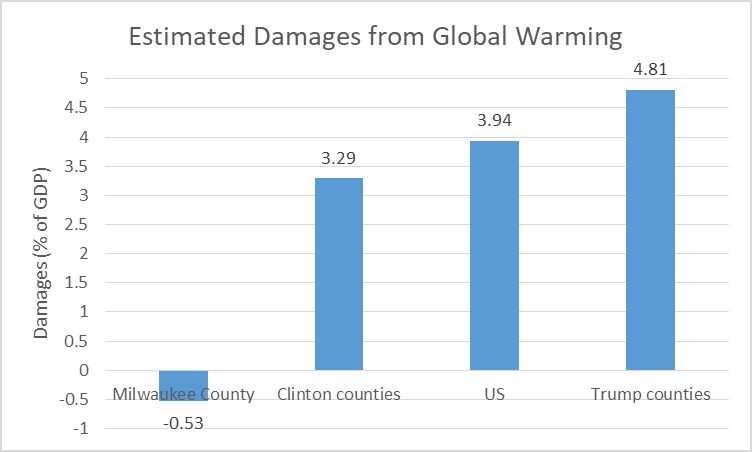 Milwaukee residents may consider themselves fortunate to live in a region that is less vulnerable to—and may even benefit from–global warming. They may not feel so happy, however, if the future brings a growing stream of refugees from regions with economies hard hit by rising temperatures.

34 thoughts on “Data Wonk: Who Wins From Global Warming?”