How Will Trumpcare Affect Wisconsin?

The bottom line: worse health and 1,000 additional deaths per year.

After several months of secret meetings the U.S. Senate leadership released its version of the bill to replace Obamacare, called the Better Care Reconciliation Act of 2017. The Congressional Budget Office (CBO) projects that 22 million people now covered by Obamacare would lose their coverage. How would it affect Wisconsin?

The next graph shows the elements that go into CBO’s estimate that 22 million would lose coverage. Roughly seven million of this loss comes from changes in the “nongroup” market, those purchasing insurance on their own or through the Obamacare exchanges. Although these exchanges have received the most attention, about twice as many people—15 million—would lose coverage because of proposed changes to Medicaid, especially its conversion to block grants that would be capped at less than the medical inflation rate. 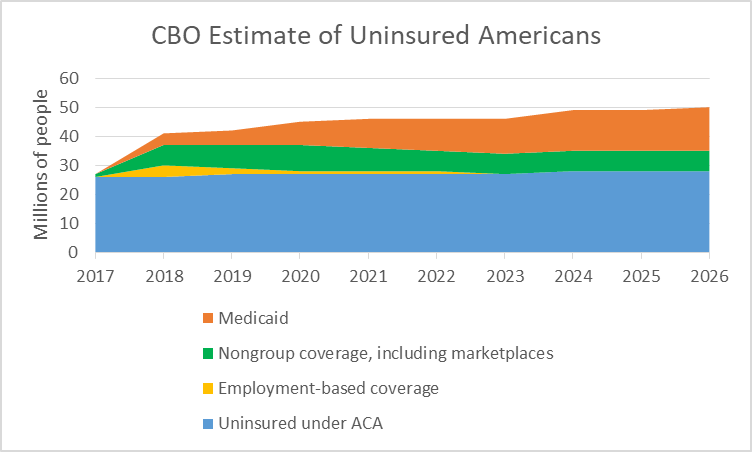 While the CBO has not broken down the projected coverage decrease for each state, the Urban Institute concludes that in Wisconsin, about 286,000 more people are expected to be uninsured under the Senate health-care bill than under Obamacare in 2022, as shown on the following chart. There are some differences between the estimates from the CBO and the Urban Institute; for example, the latter projects that 24 million people would be left without insurance under the Senate bill. Yet it also estimates that two thirds of this increase would come from people losing coverage from Medicaid. What explains the Wisconsin difference? 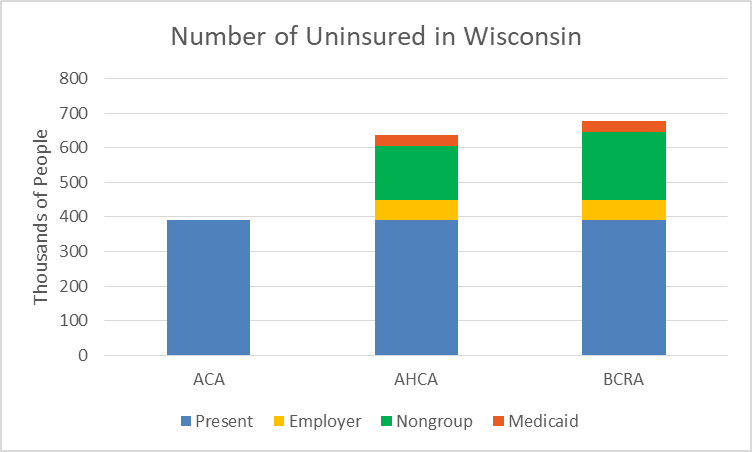 Number of Uninsured in Wisconsin

A place to start is with the coverage gap, people who made less than the Federal Poverty Line, but more than their state’s cap on family income eligible for Medicaid. According to the Kaiser Foundation, as shown in the graph below, nationally about 10 percent of the uninsured is due to the coverage gap. Every one of the states with a coverage gap turned down the Obamacare offer of additional funding to plug this gap. 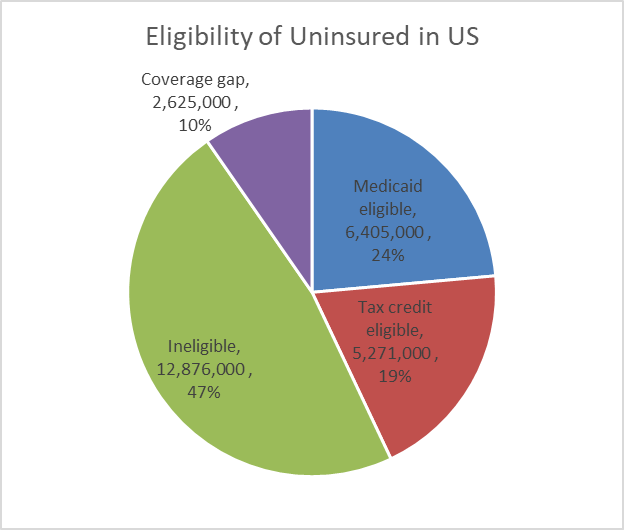 Eligibility of Uninsured in US

Wisconsin was the exception. It turned down the funding but closed the coverage gap. Instead it moved people whose income exceeded 100 percent of the Federal Poverty Level (FPL) out of Medicaid and encouraged them to buy private insurance on the Obamacare exchanges. Doing so made room for more people under the FPL to get on Medicaid (mostly adults without children).

Compared to accepting the offer to expand Medicaid to everyone under 130 percent of the FPL, this strategy was costly to Wisconsin taxpayers. However, it allowed Governor Scott Walker to brag that he was the only governor to offer insurance to everyone while refusing the Obamacare subsidy to expand Medicaid. Unmentioned, of course, was that this strategy was available only because the Obamacare exchange made subsidized insurance available to those who were forced off Medicaid. 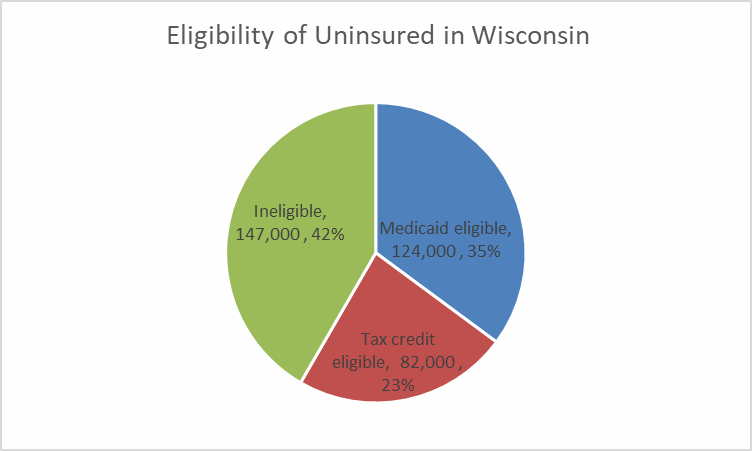 Eligibility of Uninsured in Wisconsin

What would be the effect on the people whose income is between 100 percent and 130 percent of the Federal Poverty Level—those who would have qualified for Medicaid under the Obamacare expansion but instead were encouraged to buy insurance on the exchange? First, it is worth noting that we do not know how many of those dropped from Medicaid actually gained coverage from other sources.

The Kaiser Family Foundation has published data on projected net premiums for each county in the U.S. broken down by income, age, and the type of plan chosen. The chart below shows the estimated premium after subsidies for a 60-year-old living in Southeastern Wisconsin and choosing the mid-level or “silver” plan. The blue columns are the net premium under the Affordable Care Act (Obamacare); the red show the net premium under the Senate bill. For someone making around $50,000 the premium would consume almost a third of that person’s income. It is likely that many people in their 50s and early 60s would find the premiums unaffordable under the Senate bill. 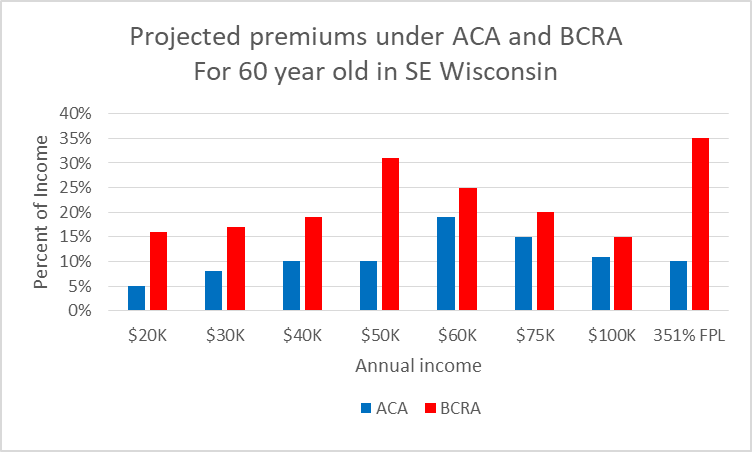 At first blush, the Senate bill favors young people. As shown below, for them the net premium would be lower sometimes and higher other times than today, depending on their income. 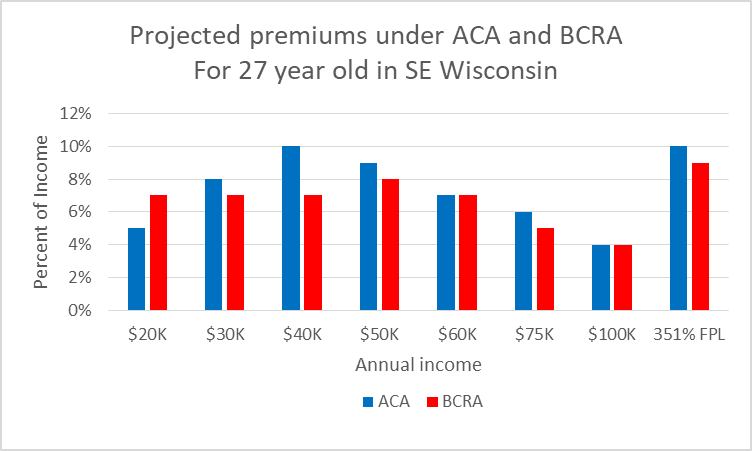 But this comparison ignores the loss of “cost sharing subsidies” that help with deductibles. Under present law, the federal government requires insurance companies to reduce deductibles for low-income people. The government in turn subsidizes the insurance companies for their loss of income. Under the Senate bill, these subsidies would be eliminated starting in 2020.

The CBO concludes that few low-income young people would purchase insurance under the Senate plan:

Under this legislation, starting in 2020, the premium for a silver plan would typically be a relatively high percentage of income for low-income people. The deductible for a plan with an actuarial value of 58 percent would be a significantly higher percentage of income—also making such a plan unattractive, but for a different reason. As a result, despite being eligible for premium tax credits, few low-income people would purchase any plan, CBO and JCT estimate.

Thus the Wisconsin residents who lost Medicaid coverage because they were slightly above the FPL would likely end up without coverage.

The CBO report also concludes that neither the continuation of Obamacare nor its replacement by the Senate bill is likely to lead a “death spiral” in which only sick people buy insurance, leading to higher premiums and an ever-sicker insured population until the whole system collapses. It does warn, however, about insurers leaving the market under Obamacare:

Several factors may lead insurers to withdraw from the market—including lack of profitability and substantial uncertainty about enforcement of the individual mandate and about future payments of the cost-sharing subsidies to reduce out-of-pocket payments for people who enroll in nongroup coverage through the marketplaces established by the ACA.

The CBO does not mention that the Trump administration appears to be deliberately creating uncertainty about enforcement of the individual mandate and about future payment of the cost-sharing subsidies. Presumably this is so that the administration can claim that Obamacare is failing.

After listing uncertainties, the CBO concludes:

Despite the uncertainty, the direction of certain effects of this legislation is clear… the amount of federal revenues collected and the amount of spending on Medicaid would almost surely both be lower than under current law. And the number of uninsured people under this legislation would almost surely be greater than under current law.

From a conventional political viewpoint, the push by Donald Trump and the Republicans to repeal Obamacare or replace it with a plan that vastly increases the number of people without coverage is puzzling at best. The people most likely to lose affordable coverage skew heavily towards those who put Trump in office—middle aged and middle income.

A week before he took office, Trump gave an interview with the Washington Post, in which he promised, “We’re going to have insurance for everybody. There was a philosophy in some circles that if you can’t pay for it, you don’t get it. That’s not going to happen with us.” He promised to “not have people dying on the street.”

But dying is one of the risks of losing insurance coverage. A paper published this year estimated there would be one life saved for every 239 to 316 adults gaining coverage. Applying this range to estimates of the number of Wisconsinites losing coverage under the Senate or House version of Trumpcare results in an estimated additional 1,000 deaths per year in Wisconsin.

The effects of taking insurance away are not limited to mortality. As a recently published paper in the New England Journal of Medicine notes, having insurance affects financial stability, access to care, chronic disease care, and well-being and self-reported health. Whatever one thinks of the morality of the proposed plan, its negative outcomes cannot be good for Republicans’ political success.

9 thoughts on “Data Wonk: How Will Trumpcare Affect Wisconsin?”