The Problem of Pre-Existing Conditions

Assembly bill addresses issue. But how much coverage does it provide?

By Jon Peacock, Wisconsin Budget Project - Jun 27th, 2017 09:18 am
Get a daily rundown of the top stories on Urban Milwaukee

One of the many problems with the bill to repeal and partially replace the Affordable Care Act (ACA) is that it would seriously erode the current protections for millions of Americans who have preexisting health conditions. That’s a very unpopular part of the American Health Care Act (AHCA), the Republican health care bill, but there’s a lot of confusion about how it undermines coverage for people with chronic health conditions.

The confusion was evident during a late night debate in the Wisconsin legislature last week, when the Assembly passed a bill that would purportedly protect people with preexisting conditions, but which largely misses the mark because it fails to address a huge loophole contained in AHCA. The muddled debate after midnight on June 22nd is a great example of why there needs to be a longer and more open debate about the version of AHCA that was developed behind closed doors in recent weeks.

The bill approved by the Assembly, AB 365, had been introduced by Democrats and was intended to protect the part of the ACA that prevents insurers from putting annual or lifetime caps on insurance coverage. In a surprise move, Republicans voted in favor of a motion offered by a Democrat to pull AB 365 from committee and bring it to the Assembly floor. However, the majority party then replaced the original provisions of the bill – over the objections of Democrats who complained that their bill was being hijacked – with a substitute amendment that approaches the problem from a very different perspective.

After about an hour of debate that wrapped up around 1:00 a.m. Thursday morning, the Assembly approved the substitute amendment and the amended bill on party line votes. If it is also approved by the state Senate and signed by the Governor, the latest version of AB 365 would put Wisconsin on record as being opposed to discrimination against people with preexisting conditions – yet it does so in a rather toothless way that would enable insurers to cap their coverage for health care services that a state says are no longer “essential health benefits.”

Prior to implementation of the ACA (“Obamacare”), insurers could deny coverage to people with health conditions – such as those who had ever been diagnosed with asthma, high blood pressure, or depression. Alternatively, insurers could charge those individuals higher premiums. In addition, they could limit coverage for people with serious or chronic health care needs by putting annual or lifetime limits on how much an individual has to pay for deductibles and copays.

The Senate repeal and replacement plan would preserve those protections, and the House bill (AHCA) would preserve most of them – except the prohibition on charging more for people with preexisting conditions. However, both bills contain an enormous loophole; they allow states to waive the requirement for insurance plans to cover 10 essential health benefits. States could choose to waive any combination or all of the essential health benefits under the ACA, and the protections discussed earlier would not apply to services that were not deemed essential. 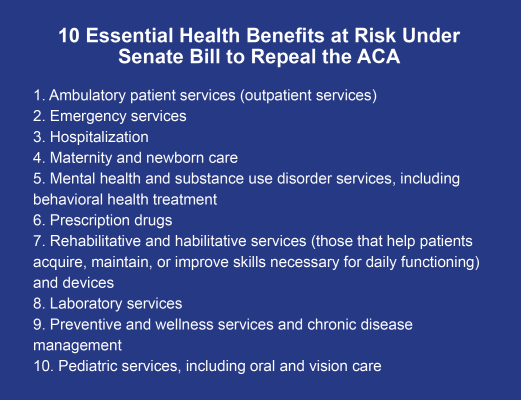 In states that approve such waivers – for example, by waiving the requirement to cover prescription drugs – a cancer patient requiring expensive chemotherapy could find early in their treatment that they had reached a cap on what the insurer will pay for the lifesaving drug. And a person who struggles with depression might find that the only plan he/she can afford is one that does not cover mental health treatment.

The Congressional Budget Office estimates that half of Americans will be in states that waive some of the requirements relating to essential health benefits. Using that report and other data relating to people who buy insurance through the individual market, Topher Spiro of the Center for American Progress, concluded that “about 5.3 million people with preexisting conditions would live in waiver sates and have their protections severely eroded.”

The amended version of AB 365 does not close that loophole, so it does not resolve the biggest problem that the House and Senate versions of AHCA would cause for coverage of people with preexisting conditions. In other words, the Assembly managed to pass a bill that appears to give people with chronic conditions some assurance that AHCA will not undermine their coverage, but AB 365 falls far short of accomplishing that objective.

The debate during the early hours of Thursday morning included some great statements by legislators in both parties about the importance of protecting access to quality, affordable health care for people who have preexisting health conditions. I hope that all the rhetoric was sincere, and that the fact that the amended bill comes up far short is because state legislators did not understand how the House and Senate versions of AHCA put health care at risk for millions of Americans who have chronic health conditions.

Fortunately, there’s an opportunity for the state Senate to fix AB 365 and to prove that members of both parties truly want to protect health care services for people with chronic health problems and other preexisting conditions.

One thought on “Wisconsin Budget: The Problem of Pre-Existing Conditions”