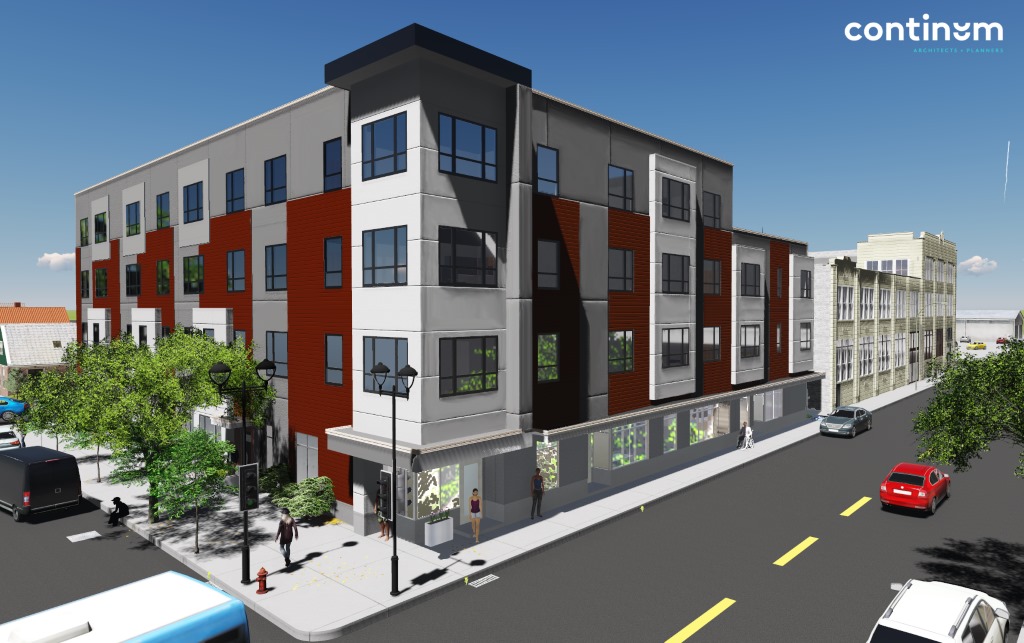 The City Plan Commission has advanced a revised proposal to redevelop a former factory. The proposed development, now known as The Legacy Lofts at the Blommer Ice Cream Factory, would rehabilitate the century-old factory at 1500 W. North Ave. into apartments and add a 26-unit, four-story apartment building immediately to its west. Located in the city’s Lindsay Heights neighborhood, the project found unanimous support from the commission.

The project is being developed by a partnership of Legacy Midwest Renewal Corp and Chicago-based Evergreen Real Estate Group. Continuum Architects + Planners is serving as the project architect, bringing extensive knowledge of adaptive reuse projects and historic preservation tax credits to the project. Greenfire Management Services is slated to serve as the project’s general contractor.

Of the 64 units in the project, only 10 would be available as market-rate housing. The bulk of the units in the project would be set aside for those making between $17,400 and $46,920 according to the developer’s presentation. Those would be financed in part with $723,000 in low-income housing tax credits from the Wisconsin Housing and Economic Development Authority. Sixteen of the units would be made available for those participating in WHEDA’s supportive housing program designed to combat homelessness.

The apartments in both buildings would be a mix of one-, two-, three- and four-bedroom units.

Speaking before the commission in an impromptu speech, Sally Peltz, president of Legacy Midwest, stated: “It’s a warehouse. It could have easily come down. I love new construction, but I love historic preservation. I’m just proud.” Peltz’s firm will relocate into approximately 1,600 square-feet of commercial space planned for the new building.

The former Blommer Ice Cream factory, which hasn’t made delicious treats for years, was originally built in 1910 and expanded in 1925. It would house 38 units under the proposal. The new building, which would contain 26 units, would be developed on a site that currently is occupied by a vacant surface parking lot and duplex. The duplex would be razed to accommodate the development.

The presentation before the commission noted that the development team anticipates closing on the purchase of the property on August 28th. Construction is planned to be completed in August 2018.

The design changes before the commission were largely a result of feedback from the National Parks Service. To receive both the state and federal credits the project’s design must be approved by the National Parks Service and State Historic Preservation Officer. A series of tweaks to windows, changes to wall sconces and the relocation of units had the project back before the City Plan Commission.

The project’s design, which exceeds the existing zoning limits for the site, was previously approved in 2016 with the creation of a Detailed Planned Development that overrides zoning on the site. Any change to a DPD project requires review by a series of city entities.

The project was unanimously endorsed by the citizen-lead City Plan Commission and will next go before the Common Council’s Zoning, Neighborhoods & Development Committee.

The revised design isn’t the only thing changing about the project. The city will step in to support the project by creating a developer-financed Tax-Incremental Financing (TIF) district. The development team will advance the city $635,000, which the city will then expend on the project. The development team will then be paid back over a period of no more than 20 years from incremental property tax revenue generated by the project. The financing mechanism, which places the risk solely on the developer, allows the city to help developers plug a project financing gap with virtually no risk to the city’s fiscal health.

The TIF proposal, which would be the city’s 90th district, will go before the Common Council’s Zoning, Neighborhoods & Development Committee in the coming weeks.

The project has an estimated cost of $13.7 million.