How Trucks Destroy Our Roads

And how a fee on trucks could solve state’s transportation problem. 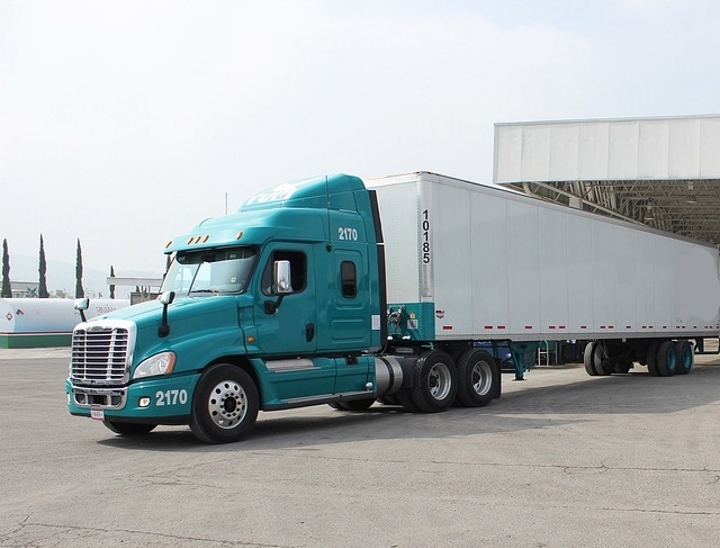 It was back in 2000 that Milwaukee’s Hoan Bridge collapsed when steel girders cracked. “Several factors were blamed for the collapse,” an Associated Press story noted, “including a significant number of heavy trucks, some over the normal weight limit, that routinely traveled over the bridge.”

Seven years later came the famous collapse of Minnesota’s I-35W Bridge. Its destruction was blamed on a design failure, but also to the impact of trucks. The 1967 bridge “was built at a time when the bulk of the nation’s freight moved by rail and not by massive eighteen-wheeler trucks” writer Barry B. LePatner reported, and the heavier truck loads “represented a significant increase over the design load of the structure.”

Across America, including Wisconsin, roads and bridges are falling apart, so much so that President Donald Trump ran on a platform of passing a major infrastructure program. And a major reason for this deterioration is the impact of heavy trucks.

An off-quoted federal study once found that road damage from one 18-wheeler is equivalent to the impact of 9,600 cars. A fully loaded tractor-trailer weighs 80,000 pounds, 20 times more than a typical passenger car at 4,000 pounds, but the wear and tear caused by the truck is exponentially greater.

One analysis contends freight-hauling trucks cause 99 percent of wear-and-tear on US roads, but only pay for 35 percent of the maintenance.

Big trucks take a toll even on interstate highways designed to handle heavy loads, but the far bigger damage comes to state and local roads that aren’t designed for the massive impact of 80,000-pound trucks. One study estimated the average traffic by large trucks on non-arterial rural roads in the U.S. increased 16 percent from 2000 to 2012.

The result was noted by Cesar Quiroga, a senior research engineer with the Texas A&M Transportation Institute: “In south Texas,” he told the uber-specialty publication Roads & Bridges, “there are many farm-to-market roads, which were designed to handle the occasional combine or 18-wheeler. But now you have a massive influx of heavy loads, and many of these roads have been destroyed pretty quickly.”

And when the trucks are overloaded, “as quite a few of them are, the damage is exponentially worse,” a story in Governing magazine noted. “Increasing a truck’s weight to 90,000 pounds results in a 42 percent increase in road wear. Pavement designed to last 20 years wears out in seven.”

The Wisconsin Department of Transportation “proposed adding 24 new highway inspectors in the 2013 state budget, citing a DOT study that showed overweight trucks cause $41 million in pavement damage annually in the state,” as Wisconsin Public Radio reported. But the Republican-led Joint Finance Committee rejected the plan.

“Soon after, the full Legislature passed a new law increasing the weight limit for agricultural equipment on Wisconsin roads by 15 percent to 92,000 pounds,” the story noted.

As the maintenance costs for Wisconsin’s highways have grown, the state transportation fund has not kept pace and the state is now on track to borrow fully 25 percent of all money it spends on the roads, passing on a multi-billion debt to our children and grandchildren. The seemingly obvious solution — increase the gas tax — was championed in a past column of mine, but is opposed by Gov. Scott Walker and many Republicans. And in light of the data on the toll that trucks take, I’m beginning to wonder if simply hiking the gas tax is the right approach. As for toll roads, that requires approval from the federal government, and is a complex endeavor that could take years to create.

Into this stalemate has stepped Rep. Amy Loudenbeck (R-Clinton), who is pushing to add a new per-mile fee on heavy trucks. Four states have passed such a fee: Kentucky, New York, New Mexico and Oregon. Kentucky’s fee, she notes, is 2.85 cents per mile for vehicles over 59,000 pounds gross weight (including the load), and would raise $125 million per year in Wisconsin.

Nationally, Loudenbeck notes, the fee has been referred to as a “third structure” (not a gas tax and not a registration fee). Since trucks are already registered and regulated, the fee would be easy to administer. She calls it “a revenue-generating element that is equitable and sustainable.”

“I feel a sense of urgency with regards to finding a solution as I represent a significant portion of the I-39/90 corridor which could be drastically impacted depending on the outcome of the transportation budget,” Loudenbeck says.

Rep. John Nygren (R-Marinette) and Assembly Speaker Robin Vos (R-Rochester) last week told the Journal Sentinel they haven’t ruled out Loudenbeck’s idea. As things stand now, trucks are not paying their full share for their huge contribution to the maintenance needs of our roads system. Instead, all drivers and all businesses that don’t rely on truck transport are subsidizing the trucking industry.

This subsidy is distorting the economy, as the True Cost blog notes: “Since the trucking industry doesn’t pay the true cost of its road usage, it benefits relative to rail and other forms of transport. Freight rail lines are privately owned and maintained in the US, so they don’t receive a similar subsidy. As a result, more truck traffic ends up on highways than the market would dictate, leaving the taxpayers poorer, the air dirtier, and the roads more congested.” Not to mention falling apart and riddled with potholes which cause damage to cars.

It is the Republican Party that is supposed to favor solutions to allow an unfettered marketplace, so Loudenbeck’s proposal would seem to be a slam dunk. Except for all those lobbying and campaign donation dollars spent by the trucking lobby. The Wisconsin Motor Carriers Association, which is headed by former GOP Sen. Neil Kedzie, has contributed $1.2 million to Wisconsin politicians, including more than $700,000 to Walker, the Wisconsin Democracy Campaign has reported.

As Mantill Williams, spokesperson for the American Automobile Association, noted to Governing magazine, “The trucking industry… is very well funded and well connected, and they can usually outman any type of opposing effort.”

This a moment of truth for Republican leaders. Will they live up to their political philosophy, while standing up for all voters, or will they cave in to the truck lobby? The public, one hopes, will be watching.

10 thoughts on “Murphy’s Law: How Trucks Destroy Our Roads”