Is Manufacturing in Decline?

Recent trends are down in Wisconsin, but hardly a cause for panic.

What is happening to manufacturing employment in Wisconsin? A recent Journal Sentinel article by Craig Gilbert and John Schmid painted a bleak picture:

Manufacturing employment last year posted declines in 28 states, including a sharp drop in Wisconsin, where the factory sector is the historic backbone of the state economy.

A few days earlier the Journal Sentinel published another article by Schmid speculating that the Wisconsin slowdown could presage a coming national recession. They quoted Todd Berry, the president of the Wisconsin Taxpayers Alliance as saying:

“Wisconsin tends to slow and go into recession before the rest of the country,” typically with slumps in the state’s manufacturing economy…

My first graph here shows the Wisconsin manufacturing employment as estimated by the US Bureau of Labor Statistics (BLS), part of the Labor Department. Notice that there are two different ways of measuring employment:

(A third measurement, called the Current Population Survey (CPS), is based on a sample of households. Done by the Census Bureau, it is used to calculate the unemployment rate.) 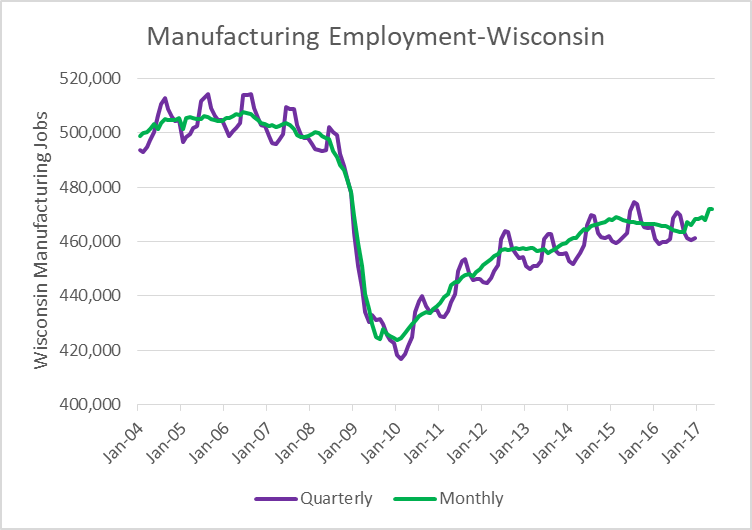 The Journal Sentinel prefers to use the QCEW because it incorporates the most information. However, it suffers from two limitations:

It is not seasonally adjusted, which accounts for the repeated peaks and valleys in the graph above. Thus any comparison is meaningful only if a month is compared to the same month in a previous year.

There is a delay of several months before it is reported. The report for the first quarter of 2017 will come out in late July. 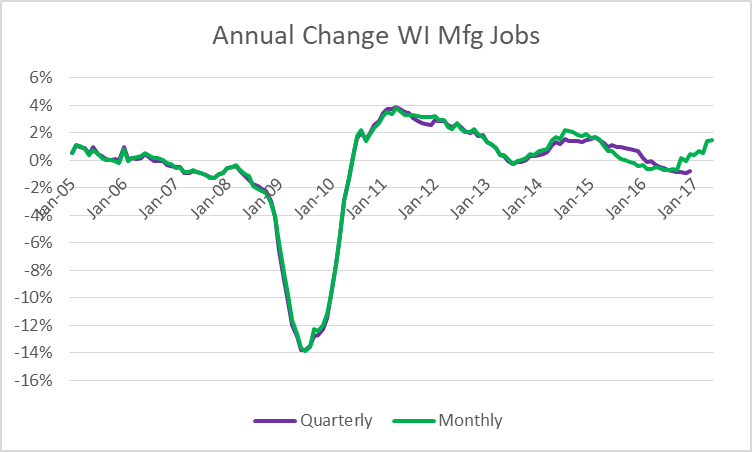 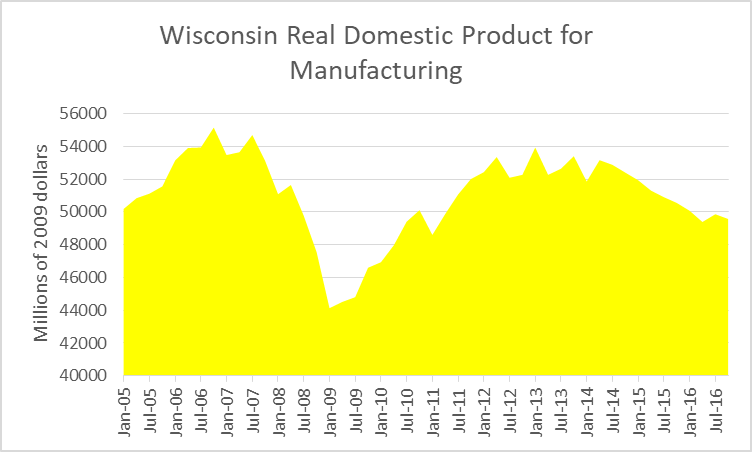 Part of the explanation for this decline could be the world-wide decline in the demand for coal. Several major Milwaukee area companies build heavy equipment for coal mining and thus are very dependent on the opening of new coal mines.

Increasingly, one hears the argument that manufacturing is constrained by the lack of qualified workers. There are increasing stories about job positions that go unfilled. On the whole economists have been skeptical about the theory that a skills mismatch is a major factor, arguing if there were a true labor shortage worker pay should have increased more than it has.

One possible cause for a skilled worker shortage is pay that lags behind other manufacturing states. The next graph is consistent with this theory. It shows average earnings of manufacturing employees in Wisconsin and three other Midwestern states with a large manufacturing sector since 2007. Wisconsin pay has lagged behind its neighbors for much of this period. Starting in early 2016, pay has risen in all four states as the US moves towards full employment. Also, Wisconsin seems to have narrowed the gap with the other states. 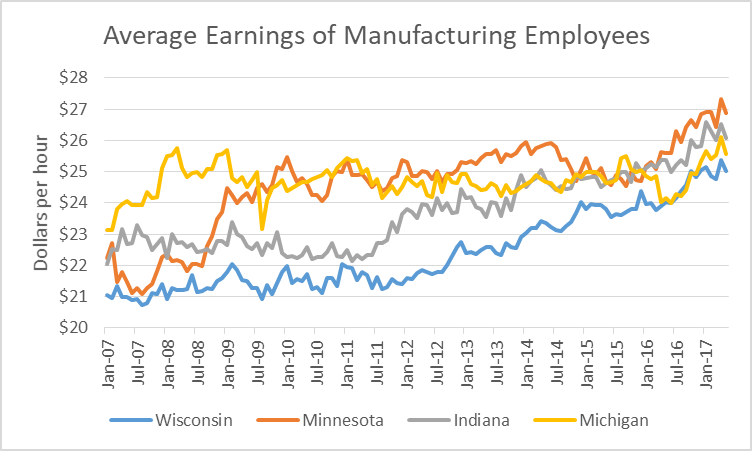 It is worth noting that although the chart starts before the Great Recession, it would be hard to identify the recession from the series. This reflects the stickiness of pay in the downward direction. When hard times hit employers are reluctant to cut pay; rather, they cut their workforce.

The same economic theory that suggests that low taxes are a route to prosperity also suggests that low labor costs could attract employers. Both Act 10 and Wisconsin’s right to work law fit into this theory by helping to hold down wages and benefits. The potential downside to this strategy, particularly as the labor market tightens nationally, is that Wisconsin may be viewed as a less attractive place for those seeking jobs.

Is the concern over manufacturing justified? As can be seen in the graph below, it represents about 18 percent of Wisconsin’s domestic product. In the Milwaukee area it is about 14 percent. This is certainly an important segment of the job market, but others are just as important. Why isn’t the same attention devoted to them? 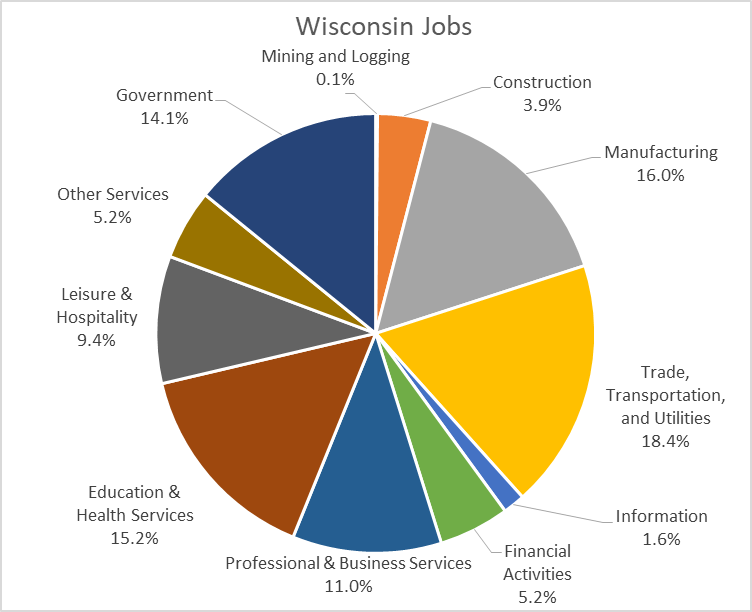 For example, why isn’t there the same concern over lost retail jobs? As a recent Atlantic magazine article points out, in the last few months retailers have shed over 100,000 jobs, and the job cuts announcements keep coming.

In the 1970s, when Schlitz was riding high, the general counsel discovered that there were more lawyers working in the bottle house than in the legal department. Apparently law students would get jobs in the brewery while working towards their law degrees, only to discover upon graduation that the brewery work had better pay and benefits than working as a lawyer.

There is a danger, I think, of letting nostalgia for the past drive economic policy. While it is important not to write off manufacturing, it is also a mistake to expect a return of the highly repetitious mass manufacturing jobs. Those jobs are either being automated away or migrating to nations with much lower labor costs. In its fixation on manufacturing jobs, Wisconsin runs the danger of a milder version of the coal obsession in coal producing states, which tries to recapture a past that will never return. This kind of fixation makes it harder to build a new economy and blocks serious planning for what comes next.

4 thoughts on “Data Wonk: Is Manufacturing in Decline?”