Changes to Medicaid Leave Wisconsin Behind

By Sashi Gregory and Jon Peacock, Wisconsin Budget Project - Jun 16th, 2017 10:28 am
Get a daily rundown of the top stories on Urban Milwaukee

Without so much as a single public hearing, Congress is close to approving huge changes to Medicaid that substantially reduce spending and radically change how funding is allocated. One of the ways that those changes will hurt Wisconsin is by permanently penalizing states like ours that currently spend well below the national average for each person in Medicaid.

One aspect of this problem has gotten some press attention this week – the way that the new funding allocation will lock into place lower federal support for the 19 states, including Wisconsin, that did not take federal Medicaid expansion funds. Jason Stein’s June 13 article in the Journal Sentinel does a nice job of covering that issue.

However, an even more basic problem is that the new funding formula would be based on each state’s average spending per Medicaid participant, which will freeze into place the lower federal funding levels in states that have had very narrow benefits and also in states with more generous benefits but more efficient use of their funding. Wisconsin is in the second category — though there are ways that our economizing is keeping some recipients from receiving the care they need. But regardless of how our state has achieved its low spending per Medicaid participant, setting caps that lock in our lower federal support would penalize Wisconsin  for being a leader in holding down costs.

The most recent data, from 2014, shows that Wisconsin’s average spending per Medicaid participant has been near the bottom among all states. If the Medicaid changes are enacted, health care costs will increase faster than the federal funding, so Wisconsin will have to either slash spending by making cuts to eligibility or provider rates and services, or raise taxes to make up the difference. The states that have not already adopted some of the cost saving strategies used in our state won’t suffer as much from the capped spending growth proposed by American Health Care Act (AHCA) because those states can absorb some of the cuts by implementing reforms shown to be successful in Wisconsin.

As the following bar graph indicates, in 2014 our average annual spending per child in Medicaid was the second lowest in the nation. It was nearly $800, or 30.6%, below the national average. 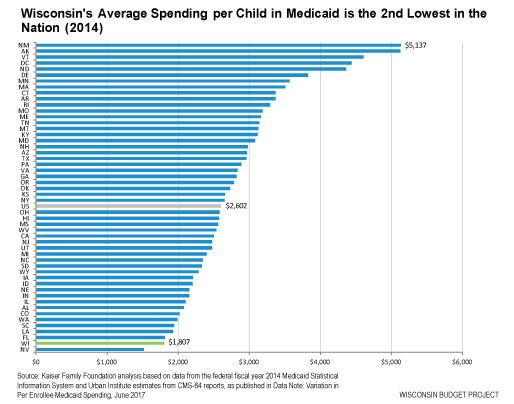 Wisconsin has fairly comprehensive Medicaid benefits for kids, except we lag behind most other states in making dental care available to low-income children, and we also struggle with a dearth of mental health services for kids. By basing our state’s future federal funding on current spending for children that is the second lowest nationally, the proposed formula in AHCA would preclude Wisconsin from closing the gaps in dental and mental health care  for kids.

Wisconsin’s spending rates for individuals with disabilities is also very low compared to other states. In 2014, our state had the fourth lowest per capita Medicaid spending for this population in the nation. This was about $5,100 (27%) below the national average. That difference may surprise some people because Wisconsin has been a leader in eliminating waiting lists and making home or community-based services available for people who need long-term care. However, it’s our leadership in developing cost-effective alternatives to institutional care that has brought down our average cost per person served. 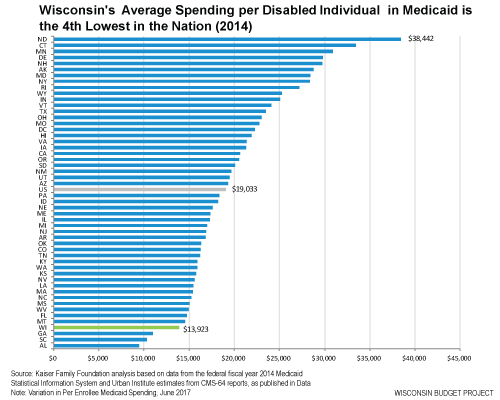 Care in the community is far less expensive than in nursing homes, and people in the community generally stay healthier. But by being one of the national leaders in the transition away from institutional care, Wisconsin could be penalized for decades to come because we would be permanently locked into having the 4th lowest federal reimbursement rate for Medicaid enrollees with disabilities.

The new Medicaid funding caps in the House version of AHCA would also be based on each state’s average spending for seniors and for other adults. The good news for Wisconsin taxpayers, at least until now, has been that we are well below the national average in those two categories (40th for seniors and 41st for other adults). But the bad news is that our state’s frugality or efficiency in Medicaid spending for those groups will penalize Wisconsin in the future, because our low federal reimbursement amounts will be locked into place.

It’s not too late for the Senate to stop the very harmful changes to Medicaid proposed in the House version of AHCA. But no tweaks to the formula to lessen the negative impact for Wisconsin will resolve the larger problem that the caps will gradually produce huge cuts to Medicaid and the rationing of health care services for vulnerable Americans — including seniors, people with disabilities and low-income kids and families.

The best move for the Senate is to defeat AHCA or at least pull out the changes to Medicaid. Such monumental changes that permanently alter the structure of Medicaid should not be advanced without public hearings, open committee meetings, and bipartisan debate.

3 thoughts on “Wisconsin Budget: Changes to Medicaid Leave Wisconsin Behind”