Medical College Gets Largest Gift Ever 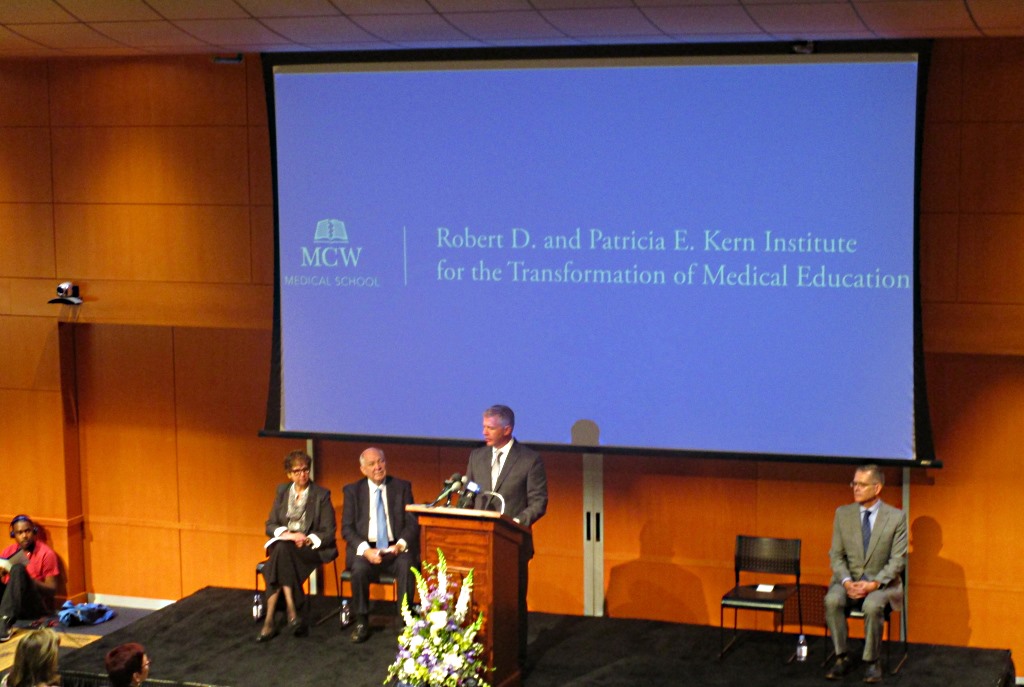 A single philanthropic gift is expected to demonstrate the power of strength in numbers in the years ahead as the Medical College of Wisconsin embarks on a new chapter in its history.

On Thursday, Medical College’s Wauwatosa campus was abuzz with celebration as the wraps were taken off a $37.8 million gift — the largest single donation in the research institution’s history.

Robert D. and Patricia E. Kern, founders of Generac Power Systems, and their Kern Family Foundation gave MCW the gift. The donation officially establishes a new collaborative venture with six other schools across the U.S.

“We strongly believe that collaboration has a lasting impact,” said James Rahn, president of the Kern Family Foundation. “A network with this national impact and scale … will require the work of many major partners.”

The aptly named Robert D. and Patricia E. Kern Institute for the Transformation of Medical Education provides a platform for the newly christened National Transformation Network, which will give the seven participating schools greater opportunity to explore new ways of advancing medical education.

As outlined during last week’s program, the goal behind the new network is to bring together the strengths each of the seven medical schools bring to the table and ramp up new and emerging research strategies.

“(The network) will bring new eyes to the advancement of medical education,” said Cheryl Maurana, who is serving as the founding director of the Kern Institute for the Transformation of Medical Education.

John Raymond, president and CEO of Medical College, said the new network could have profound implications in the years ahead.

“These are very busy folks,” Raymond said at a Thursday ceremony of the medical professionals at the six other schools. “Their willingness to put their credentials on the line … is really quite remarkable.”

Stephen Roell, chair of MCW’s board of trustees, said the infusion of donated dollars and the new collaborative opportunities will bring what he described as a “world class education” to the Milwaukee area and will help the college “embrace change.”

“There’s been a tremendous amount of positive change that has already taken place,” Roell said. “This is an incredible demonstration of leadership and generosity.”

Although the partnership was just announced, MCW officials said the forged relationships with the peer schools have been a longtime work in progress. Talks first began in 2013 and became a reality with the Kern Family Foundation donation.

The new network partnership comes at a time when the Medical College is going through its own individual transformation.

More recently, MCW has established satellite campuses in Green Bay and Central Wisconsin in a move that has been touted as providing new, cutting-edge training opportunities for doctors in rural areas.

Robert D. and Patricia E. Kern founded Generac in 1959 and established their philanthropic organization in 1998.

The foundation is behind a number of other major donations, including ones benefiting Marquette University and the Milwaukee School of Engineering.

Marquette received a $15 million donation toward its College of Engineering, while MSOE was the recipient of a $30 million gift for an athletic field and parking structure.

2 thoughts on “Medical College Gets Largest Gift Ever”