You Dare Not Question Scott Walker

A Federalist column attacks my conclusion that governors have little impact on the economy.

In a recent column I concluded that the conservative American Legislative Exchange Council’s high ranking for Wisconsin’s economic policies did not translate into a better economic performance as measured by ALEC itself. This generated a response in the Federalist magazine taking issue with my column. My column also argued that Wisconsin’s economy was not measurably different with Scott Walker as governor than it would have been if Jim Doyle had served a third term. While this conclusion might be expected to discomfort both sides—those who believe Walker is running the state into the ground and those who credit him with every bit of good news—most objections have come from the right.

The Federalist article’s authors are Jake Curtis and Will Flanders, two employees of the conservative Wisconsin Institute for Law and Liberty. In a post titled Yes, Scott Walker Did Back Wisconsin’s Economy Away From A Cliff, they defend Walker and ALEC, while misinterpreting ALEC’s Performance measures.

Curtis and Flanders start with the assertion:

When Scott Walker was sworn in as Wisconsin’s 45th governor in January 2011, the state’s economic performance during the previous eight years had been dismal, and the outlook was worse. … Today, Wisconsin boasts … unemployment and labor participation rates that are almost impossible to top. We were therefore confused when reading a critique arguing a proverbial Martian would not be able to identify Walker’s election on Wisconsin performance graphs measuring the last ten years. This sort of analysis perfectly illustrates the Left’s continued disdain for Walker.

Given that I’ve concluded neither the most recent Democratic or Republican governor could be given much credit for the state’s economic performance, this alleged “disdain” was surely bipartisan in impact. As for the historic narrative offered here, it simply leaves out that the “dismal” Doyle days occurred when the nation was mired in the worst downturn since the Great Depression, and that Walker entered office when both Wisconsin and the U.S. were backing away from the cliff of the Great Recession. Starting a year before Walker entered office, both the state and the nation had been adding jobs, albeit Wisconsin at a faster clip.

Curtis and Flanders then turn to the annual rating of states put out by the conservative American Legislative Exchange Council (ALEC):

Not to quibble, but the name of this column is “Data Wonk.” Far more important, Curtis and Flanders mangle the difference between the Outlook and Performance scores:

No, the Performance ranking isn’t the one that “relies on 15 state policy variables” — that’s the Outlook score. Their description completely confuses the issue.

This gets it backwards; the Performance scores are supposed to track the Outlook scores; that is, if a state has the policies approved by ALEC, a better economic performance should result. But by ALEC’s own measures, that hasn’t happened in the case of Wisconsin.

To emphasize his point, he even says a foreign being would not be able to determine when the change in policy direction actually took place (i.e. Walker’s election in 2010).

I made this conclusion after providing a graph of ALEC’s performance data for Wisconsin from 2008 to the present which shows little difference between the Doyle and Walker eras. Curtis and Flanders ignore this, but promise they will reveal “several significant shortcomings and omissions” in  my analysis. First, they suggest that “ALEC’s outlook ratings might be strongly correlated with economic performance across the country but not, for whatever reason, in Wisconsin …” Actually, there are more states than Wisconsin where the Outlook ranking and Performance score don’t match. Why, then, choose predictive variables that don’t predict?

Next, they blame Doyle for Wisconsin’s poor showing under Walker:

More fundamentally, because the performance measure is based on ten-year data, it will tend to lag changes in the outlook measure. Here, the better performance of the Walker years is dragged down by the far worse performance of the preceding Gov. Jim Doyle years. The further behind you start, the longer it will take to catch up.

This ignores how the Performance scores were actually calculated by ALEC. Below, I have reproduced the graphs for Wisconsin for the three performance measures the ALEC report uses. 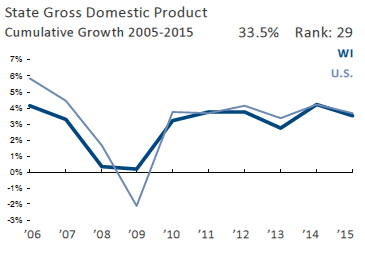 The first shows Wisconsin’s growth in gross domestic product (GDP). The 33.5 percent figure was derived by dividing 2015 GDP by that for 2005. Rather than dragging down Walker’s score, a lower 2005 GDP would have increased the growth percentage.

The claimed GDP growth of 33.5 percent does not correct for inflation. Using real GDP reduces growth to 8 percent so that 25 percent of Wisconsin’s apparent GDP growth is just inflation. By contrast, California, which was awarded a miserable Outlook score, had real GDP growth of 17 percent during the same period. 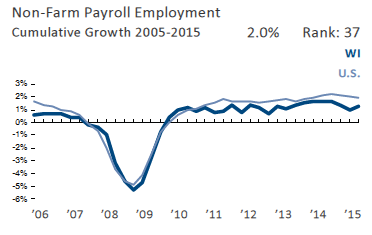 The next graph shows the growth in employment. As with GDP, lower employment in 2005 would make Walker look better, not worse.

The final performance measure used by the ALEC report is Absolute Domestic Migration, the difference between the number of people who moved into Wisconsin from other states and those who moved out over the ten year period. In this case, more people leaving Wisconsin during the Doyle years would indeed hurt Walker’s score. However, the proportion leaving Wisconsin has grown in the Walker years, so including the Doyle record actually improves Walker’s score. 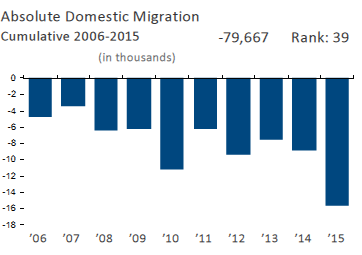 ALEC’s use of net migration seems a bit suspect to me. Consider ALEC’s scores for Arizona and Florida. Both states score in the top ten in Outlook but the bottom ten in GNP growth. What to do to prevent another embarrassing mismatch between Outlook and Performance scores? Include migration, on which Arizona and Florida, traditional retirement destinations, scored in the top five.

Interpretation of the migration data, which derive from IRS comparisons of addresses on tax returns from one year to the next, is challenging. Are people leaving Wisconsin to avoid cold winters or for better job opportunities? If the latter, the growing net out-migration is consistent with the proposition that Wisconsin’s job market has lagged behind that of other states.

Curtis and Flanders offer little evidence about the effectiveness of the ALEC Outlook measures, only linking to a report written by two ALEC consultants. Two theories seem to underlie these measures. One is that wealthy people are too heavily taxed and the secret of prosperity is to reduce their burden. Thus, ALEC penalizes states with progressive taxation (on two of its measures) and for inheritance and estate taxes.

The second theory is that prosperity results from holding down labor compensation. Thus, states are scored higher if they have so-called “right-to-work” laws, if their minimum wage is no higher than the federal level, and if they minimize workers compensation costs. The next chart compares average hourly earnings for private employees in Wisconsin, Minnesota, and the US. Perhaps one factor behind the increasing number of complaints from Wisconsin employers that they cannot find workers is that skilled workers are moving to states with higher pay. 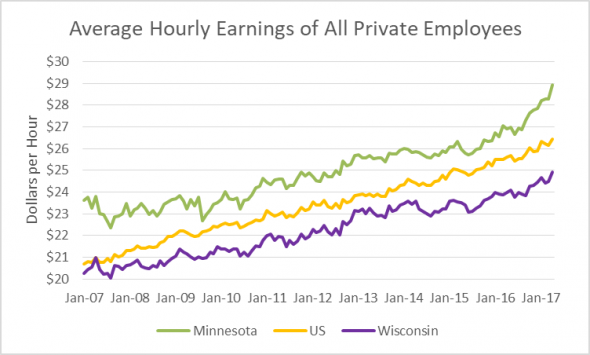 The ALEC measures are also shot through with belief in the so-called Laffer curve, the notion that tax cuts pay for themselves by increasing economic activity. This is not surprising since the lead author of the ALEC report is Arthur Laffer himself. In surveys by the University of Chicago of leading economists, there is consensus that there is “not a shred of evidence that U.S. tax cuts pay for themselves.”

Where does this leave us? There seem to be two questions involved in looking at the Walker record: (1) how has Wisconsin fared economically since Walker took office and (2) to what extent is it fair to give him the credit or blame?

On the first question, a variety of measures show that Wisconsin has lagged behind most of its neighbors and the US as a whole during Walker’s term. At the same time, its performance has been far from the worst. Consider our unfortunate neighbor Illinois, where the governor and legislature can’t agree on a way to close the huge gap between their pension obligations and the available funds. Or Kansas, where the governor believed Laffer’s claims that tax cuts would pay for themselves only to create a state budget crisis.

As to the second question, it is very hard in public policy to identify a single cause for how a state performs. Research shows that governors get too much credit or blame for how the state economy performs under their watch. Which is exactly what the ALEC ratings try to do.

6 thoughts on “Data Wonk: You Dare Not Question Scott Walker”