"Summers in Milwaukee are second to none!" 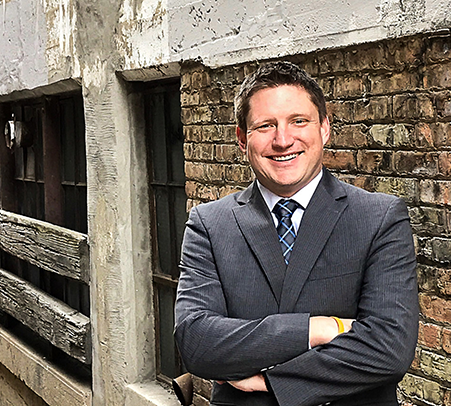 I work at Summerfest as an Architectural Designer and Project Manager. What makes my role awesome? We throw the biggest party in the world, so working for Summerfest makes my role pretty awesome. On top of that I get to plan, build, and help shape the future of this festival. The epic party and unforgettable live music is just a bonus I guess.

I’ve lived here for 15 years. I came to town for college at UWM and just couldn’t bring myself to leave. I was lucky enough to land this gig at Summerfest out of college and have been living here ever since.

Summer! Nothing beat’s Milwaukee’s parks, beer gardens, street cafés or summer festivals. Summers in Milwaukee are second to none!

What is something that is missing from our community that you would love to see implemented?

I miss the Packers. Let the packers play a couple of games in Milwaukee again.

What is one word that you would use to describe Milwaukee?

Where do you see Milwaukee in five years?

I think we’ll see the impact of all of this urban development. The city’s tough industrial nature combined with the thriving construction industry will help move this city forward. Businesses will continue to come downtown and thrive with all of the infrastructure, live-work housing, arts and entertainment. We’ll be a stronger community than ever.

What local restaurant is at the top of your list?

Saz’s. Great food, beer, and a free shuttle to the Brewer games. Beats dealing with Miller Park lots every time.

What is your biggest hope for this city?

Social and economic de-segregation of our neighborhoods.

What is your favorite Milwaukee tradition?

Grilling out, going for a bike ride on the Oak Leaf Trail to the Estabrook Beer Garden capped off with a great Brewer game, or some time on the river.

What neighborhood do you live in and why do you love it?

Since I spend more time in the Third Ward than I do at home, it feels like I live there. The third ward has the best food, beer, and character unlike any other neighborhood. On any given night you can find a quiet corner in a park, go shopping at the market, find some live music in a bar, or chill with a drink on the water. There’s so much variety in such a small neighborhood.

What’s your favorite hidden gem or secret fact about the city?

Barnacle Bud’s isn’t really a hidden gem anymore, but it is one of my favorite hangout spots.

What do you think is going to be a game changer for the city in the year of 2017?

Exposure: Summerfest’s 50th year! No music festival in the US has ever hit this milestone! City development: The light rail project. People can hate, but this is step one in a major urban infrastructure improvement that this city needed to complete. The opportunities that this project creates are endless.