Join us for drinks and appetizers by acclaimed chef at historic hotel. 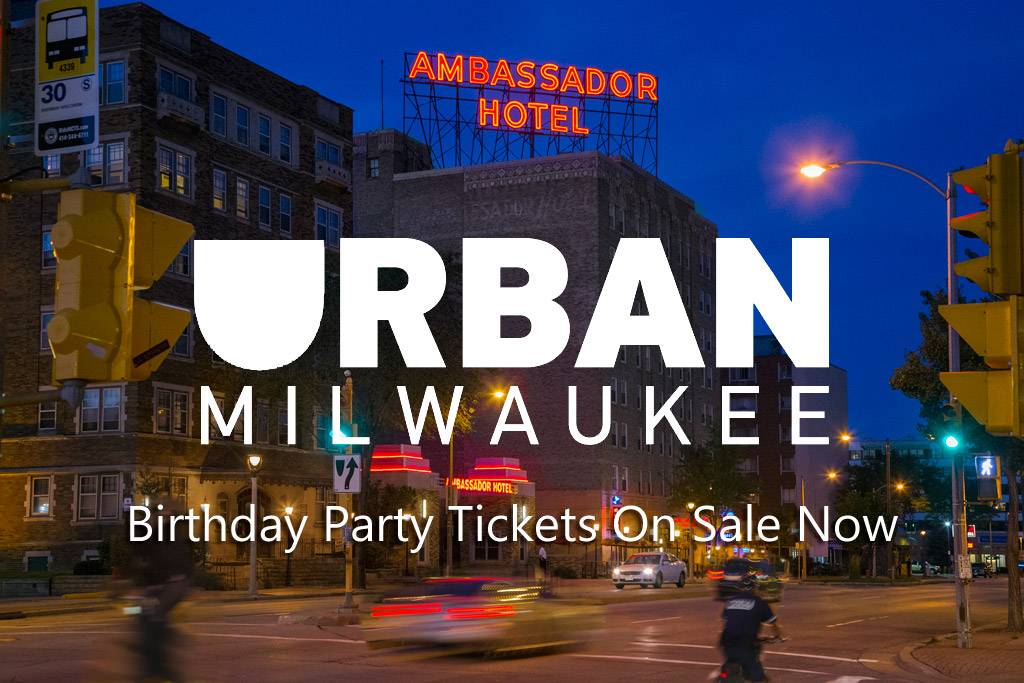 The Ambassador Hotel opened its doors 91 years ago, in 1928 and its Art Deco design exemplified the Roaring ‘20s in a city that was then a veritable manufacturing colossus. The Ambassador was designed by Milwaukee architects Urban Peacock and Armin Frank, and its Art Deco style also had touches of Egyptian Revival, a popular motif that arose after the 1922 discovery of King Tutankhamen’s tomb.

The uniquely-designed hotel was where a young Liberace performed in the 1930s, where high-society weddings and cocktail gatherings were held and presidential hopeful John F. Kennedy spoke in 1960. But during the 1970s and ’80s, the hotel and its surrounding neighborhood fell into decline.

By the the mid 1990s, however, the city was beginning to be rediscovered and the Ambassador’s new owner Rick Wiegand set out to restore the fading hotel to its former glory. After 10 years and an investment of $14 million the hotel and its black-and-white marble and terrazzo flooring, distinctive wall coves, ornate plasterwork, brushed nickel wall sconces and bronze elevator doors were all restored. A second, multi-million redevelopment in 2012 modernized the hotel while further buffing its historic design.

The hotel exemplifies a city that is on the rebound, with new development exploding in many different neighborhoods of Milwaukee and countless businesses, law firms and non-profits moving from the suburbs back to the city. And you’ll find those changes reported by Urban Milwaukee, which has grown from a tiny niche publication to an online daily publishing 40 stories and 70 press releases weekly, becoming an indispensable source for those looking to stay abreast of a changing city.

In short there is much to celebrate about Urban Milwaukee, both the city and the publication, and we will be gathering at the Ambassador on Tuesday, June 6, beginning at 5:30 p.m., to do just that.

Join the Urban Milwaukee team in celebrating our 9th birthday at the Ambassador Hotel. You’ll get a chance to hear what we’ve been up to in the past year, including our record growth, new membership program, and learn about aggressive expansion plans for 2017. You’ll also be able to meet other Urban Milwaukee readers and talk about the city you love with Urban Milwaukee writers.

But you’ll get much more than that. You’ll be among the first to try food from the Ambassador’s soon-to-launch restaurant The Fitz and enjoy libations from the Gin Rickey bar. You will be treated to a number of new dishes by new head chef Jason Gorman, a James Beard semi-finalist for Best Midwest Chef, as the hotel prepares to relaunch their restaurant, bar and cafe.

Admission to the party includes an open bar (tap beer, including some of Milwaukee’s new local breweries, house wine and specialty cocktails) and delicious appetizers for $25. And all proceeds will be used to help support the further growth of Urban Milwaukee. By all means, bring your friends!

Urban Milwaukee members receive 50 percent off tickets. So if you sign up for a membership from now through June 5th, you’ll get a special discount code to purchase party tickets for $12.50 each. In addition to the party discount you’ll get all the advantages of membership: a banner ad-free website, ad-free email, a better photo browser, free tickets to events around town and our members-only Beer Bash series.

Ambassador Hotel
An urban oasis near the heart of downtown Milwaukee where guests experience a remarkable blend of modern amenities and 1920’s Art Deco design. Every detail of the Ambassador Hotel is a testament to the bold beauty of Art Deco and the history of the Near West Side of Milwaukee. The Ambassador features 132 newly renovated guest rooms and suites, along with 3,000 square feet of meeting and event space, perfect for any meeting or private event.

About Chef Jason Gorman
Gorman’s resume boasts numerous influential establishments where he served as executive chef, including The Iron Horse Hotel, Mangia Wine Bar (Kenosha) and Dream Dance Restaurant at Potawatomi Hotel & Casino. Under Chef Jason’s direction, Dream Dance Steak was honored with the AAA Four Diamond Award each year from 2005 to 2011. In 2006, Chef Jason received Santé Magazine’s “Most Innovative Cuisine Award” for the entire region. He has also been nominated by the James Beard Foundation as a semi-finalist for “Best Chef: Midwest.”