Polar opposites back “Mobility grants” to help unemployed move to get jobs. 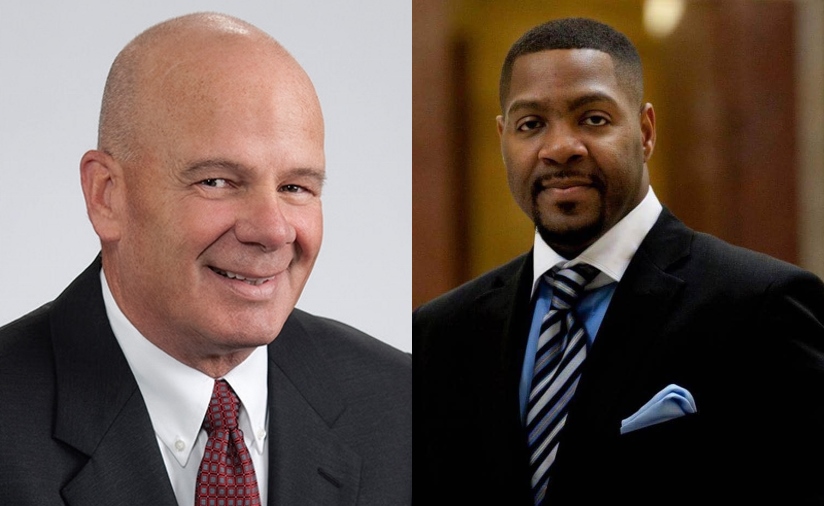 Outspoken conservative Republican Rep. Bob Gannon, 58, who represents affluent Milwaukee suburbs, once apologized for the middle-finger salute he gave the Assembly Democratic leader during a public debate. A state permit allows the insurance agency owner and landlord to pack a pistol on his right hip.

Democratic Rep. Jason Fields, 46, of Milwaukee, has two OWI convictions and says he is a recovering alcoholic. The financial educator gave an Assembly floor speech six years ago accusing both parties of “not giving a damn” about inner-city Milwaukee young black men, including four of them then living with him, struggling to survive and stay out of jail. Fields lost his Assembly seat in 2012, but regained it last year.

Maybe we’re Laurel and Hardy, Gannon joked to Capitol reporters. For non-film fans, Laurel and Hardy – one thin, one fat, both white – were slapstick comedians and movie stars from the 1920s until the 1950s.

Gannon and Fields have no leadership roles in their party’s Assembly hierarchy, so they aren’t afraid to speak their minds.

Assembly Speaker Robin Vos named Gannon chair and Fields vice-chair of a new Committee on Urban Revitalization. Fields decided to trust Gannon after he assured the Democrat he was not “anti-Milwaukee.”

After holding hearings statewide, the Odd Couple just shepherded their first bill through the Assembly. The vote was 84-13.

It would tell the state jobs agency, the Department of Workforce Development, to spend $50,000 – about what state government spends every 21 seconds – to study how “mobility grants” could help solve what officials and business leaders say is the problem of job openings in many area but too few jobs in other regions.

Specifically, the study would consider how mobility grants could help those collecting unemployment insurance (UI) relocate to areas where they could take open jobs.

Although Gov. Scott Walker’s budget included the study, the bill doesn’t have a Senate sponsor, so It may not pass the Legislature. Groups asking for it include the Metropolitan Milwaukee Association of Commerce, independent businesses and the Wisconsin Restaurant Association.

The study would focus on whether mobility grants could be financed through “social impact bonds,” which Gannon said work this way in his memo asking for cosponsors:

“Similar to ‘pay-for-success’ models, social impact bonds are an innovative financing technique in which a government will contract with an intermediary to raise private investment funds to provide upfront funding for social services. This is typically a performance-based contract, thereby removing the risk for the government entity. Investors are only repaid by the government entity if the program has succeeded in achieving the agreed-upon-goal, such as improved social outcomes.”

“The private employer would pay the cost of this,” Gannon told reporters.

With Wisconsin’s statewide unemployment rate at 3.2 percent, Gannon added, “There are job markets where we need every available worker to fill the job openings. Allowing this opportunity to move those on UI to areas with more jobs would benefit the employee, the employer and the state.”

Fields said mobility grants could “allow those stuck in poor Milwaukee neighborhoods to move away from the rough areas with little job opportunities to an area with better job prospects and better overall opportunities for everyone in those families.”

Many unemployed inner-city Milwaukee residents “can’t pick up and relocate,” Fields said, so state government has  a “moral obligation” to study ways to help them move to regions where they can find jobs.

Gannon added: “People are working, paycheck to paycheck, paying the rent and becoming a good part of society. They lose that paycheck, and they don’t have the financial ability to put a security deposit on a new place, or to pay for U-Haul truck.”

Nine of the 13 votes against the bill came from Democrats in Milwaukee and Dane counties. One of them, Rep. Lisa Subeck, said she was afraid mobility grants could lead to “punishing people who refuse to move” by taking away their jobless benefits.

Vos backed the bill, saying he has offered incentives to help Racine residents work at his popcorn business. “They just want the chance, and employers have to figure out how to make it happen.”

“We’re having fun,” Fields said of his new tag-team partner. “This is what we’re supposed to do.”

One thought on “The State of Politics: Bill Pushed by Odd Couple”