By Natasha Blakely, Great Lakes Echo - May 16th, 2017 12:55 pm
Get a daily rundown of the top stories on Urban Milwaukee 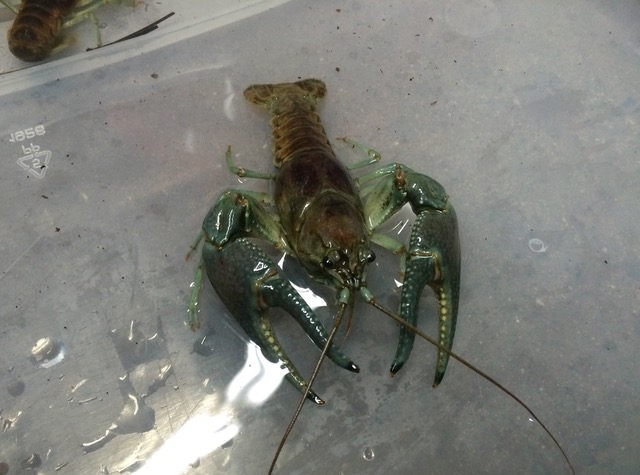 Invasive species in the Great Lakes are ganging up against native species.

A study looking into invasive zebra and quagga mussels’ relationship with invasive rusty crayfish illustrates how the harm they cause together can be greater than either of them alone.

“What we found was that these invasive crayfish are really good at exploiting the resources provided by the (invasive) mussels,” said Mael Glon, who worked on this research while pursuing a Master’s degree at Central Michigan University. “I don’t just mean eating them, because they are eating them, but they’re also eating what grows from what’s filtered from the mussels.”

The rusty crayfish has had a particularly big impact on Wisconsin. One study found that rusty crayfish “have been observed in 430 Wisconsin lakes and streams and the occurrence of rusty crayfish in sites that support crayfish has increased from 3% in the 1970s to approximately 50% in 2007.” Their invasion has been heaviest in Wisconsin and eastern Michigan, with Lake Michigan right in the middle of the problem.

There are numerous direct implications of a flourishing invasive population. Those include damage on the game fish—such as their eggs being eaten—and loss of aquatic vegetation, which in turn impedes other native aquatic organisms, Glon said. As omnivores, crayfish play a key role in the food web and have a lot of influence on other organisms.

Glon has long had an interest in crayfish, one which kickstarted his foray into environmental science.

“When I was a kid, we came to the U.S. and went to Lily Lake,” Glon said. “I went into the water and caught a crayfish, and I was blown away by how cool it was. I didn’t know you could study crayfish, do this kind of research, and when I found out, it was the coolest thing, and I haven’t really looked back.”

However, invasive crayfish and mussels are not a U.S. problem alone. The study mentions the same issue taking root in France, Britain, Germany, the Netherlands and Poland. 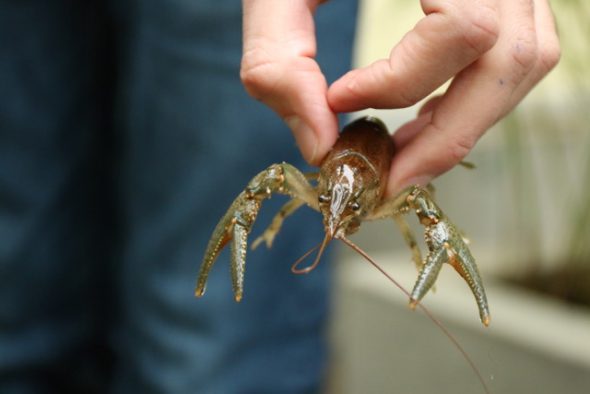 “Crayfish aren’t interchangeable,” Glon said. “Both within and between species, there’s a lot of diversity. What lives in your creek and backyard is not what’s in a creek two counties over. So it’s really important not to move the crayfish around. That’s what people do, they use crayfish to fish in other bodies of water and then release the crayfish.”

Glon cited the smallmouth bass’s relationship with crayfish as an example. That particular bass eats the crayfish, but it didn’t develop with the rusty crayfish as part of its diet. The bass will grow to be able to eat them, Glon said, but the lakes could see less healthy adult fish populations.

Central Michigan University seemed to be the perfect place to explore this invasive and native population dynamic, with their Biological Station on Beaver Island. Glon said the university emphasizes Great Lakes issues, and when he started, large tanks had just been built to work as mesocosms—or smaller bodies of water made with close-to-natural conditions, usually to make experimenting easier. Central Michigan University’s tanks were set up to mimic the conditions of nearshore Lake Michigan. This made it easier to directly understand how the crayfish and mussels interact in Lake Michigan.

But beyond the relationship between mussels and crayfish, there’s a larger lesson here about how invasive species can support each other.

“What I think is potentially interesting about this study is a lot of invasive crayfish like rusty crayfish are increasingly globally invasive,” said Eric Larson, an assistant professor with the University of Illinois who worked for Shedd Aquarium during the research. “And it’s good to have that on the radar—that dreissenid invaders might be followed by other invaders.”

Understanding this from a Great Lakes perspective is important, as it can lead to a better understanding of how to identify and control invasive species, said Kevin Pangle, associate professor at Central Michigan University and Glon’s graduate studies advisor. This includes future species that may develop relationships with the other species living there.

“I think the potential interactions between invaders, the ways that subsequent invasions might be facilitated by older invaders, have not necessarily been overlooked,” Larson said, “but it is something we don’t think about as much as we should during risk assessment and when we look at why invasive species are as successful.”

A version of this story was originally published by Great Lakes Echo. Additions by Urban Milwaukee.