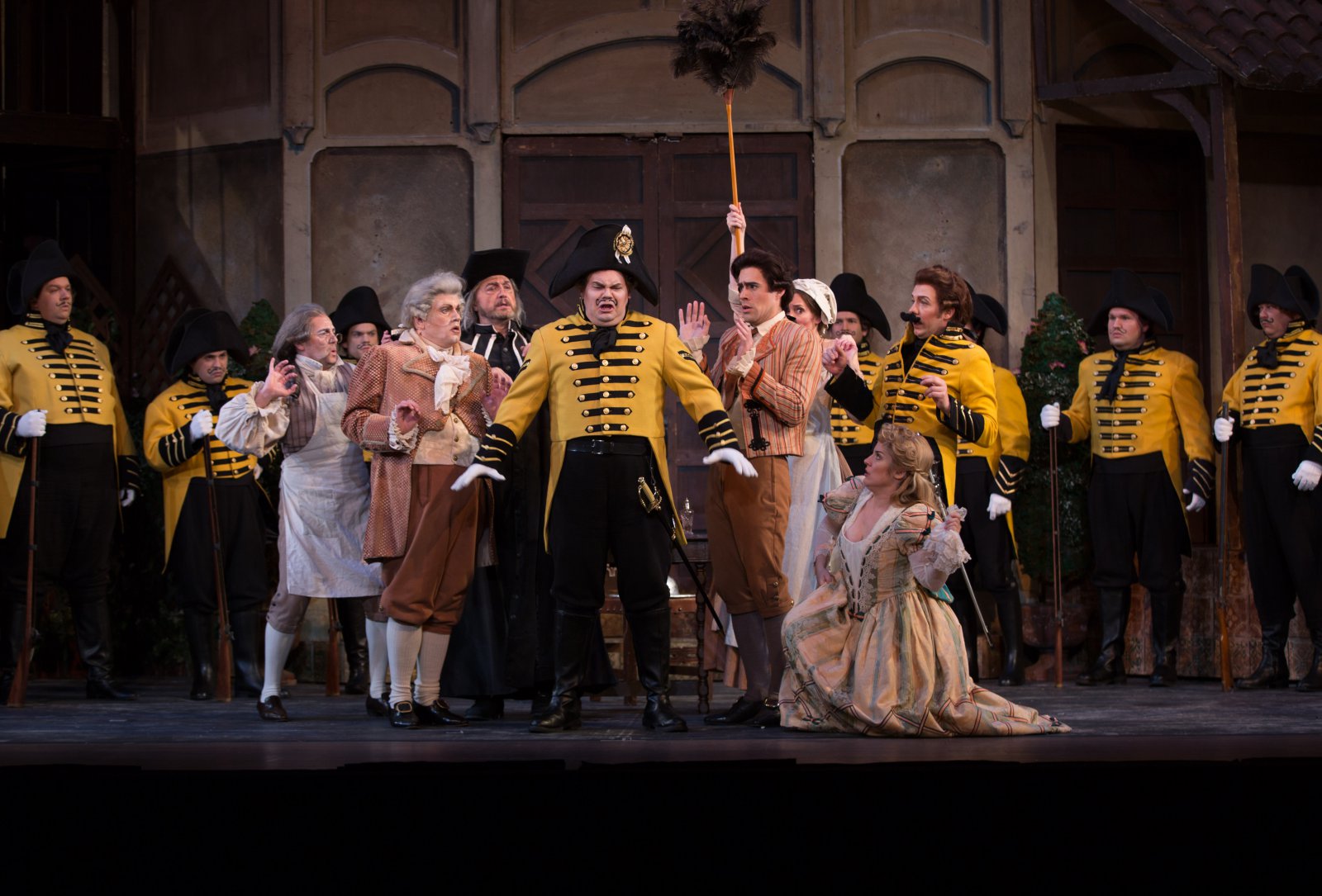 “The Barber of Seville.” Photo courtesy of the Florentine Opera Company.

Gioachino Rossini’s “The Barber of Seville” is the happy opera – enter smiling in anticipation of the famous familiar music and leave grinning if the trills and arias (sometimes falsely dismissed as opera’s pop music) are indeed the beauty promised.

By that standard the Florentine Opera put on a most happy “Barber” May 5 and 7 in Uihlein Hall. Musically it came close to being a great one. It was elevated by an understandably giddy cast happy to show off in the music. But the staging was dragged down by some overly tried and not so true shenanigans.

It made for quite a contrast. Musical director Joseph Rescigno, after 35 years now the longest enduring opera company conductor in North America, handled the Milwaukee Symphony impeccably rather than riding on the legendary melodic safety of the original. The overtures and interludes were precisely honed, the orchestra ebbed and flowed as the singers needed, the tempos were not just familiarly skilled — Rescigno insisted on discipline and had the voices who could soar above and with Rossini’s constant romantic flourishes and deliberate playing around with musical conventions of the time.

This is also music that contains its own jokes, not just in the recitatives or self-commenting arias but in how the singers can twist their tongues and larynxes for comedic effect – if you have such singers, and often Rescigno did. Some familiar players had difficulty retaining the volume against the orchestral flourishes but in almost all cases the symphony was correct and voices were rightly being challenged.

It’s also in Italian (with English supertitles) and the libretto extends the same joke over a long musical line, inviting inventive bits in the staging. Like many plots emerging from commedia dell’arte, this one is designed to be tricked up with plotting lovers, hidden letters, pompous lecher, disguises and confusion along with the famous baritone mischief of Figaro. The stage director has to choose among existing methods or invent new camping up. A certain amount of Keystone Kops gymnastics may be unavoidable.

But Florentine Director William Florescu headed down the wrong road in my view, with singers and orchestra that did not usually need his overstatements. While Rescigno kept the ensemble gloriously in tempo – the vocal combat among five or six singer plus Florentine Chorus – the staging had them bounce, tilt, bend and mug in pantomime confusion.

There could have been more trust in the lead singers because even in this giant auditorium their voices could dominate and their instinct was to humanize behavior. Yet good actors who manage warmth and context were made to over-bumble into sustained pretense.

So it is the singing the audience should remember.

Catch up with Luis Alejandro Orozco – Figaro is in his wheelhouse. He is a flamboyant, stylish, delightful Figaro in total ease with the tongue twists and commanding mannerisms – an almost storybook personification. Taylor Stayton, as the disguised count in love and in constant disguises, boasts a youthful ringing tenor that draws attention to his rapid bursts of passion. To many that represents the bel canto style. The method sometimes seemed to possess Stayton rather than the other way around. 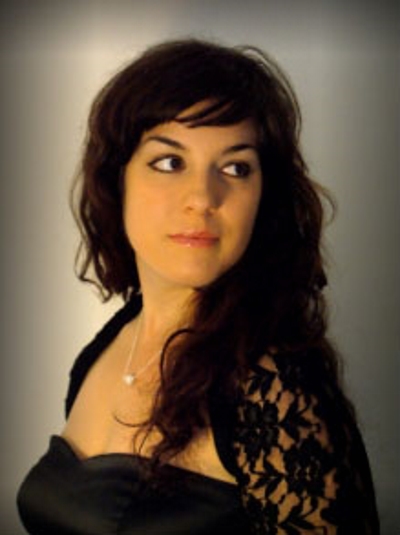 The standout was mezzo Carol Garcia as Rosina, a role constantly demanding delicacy in when to pull back the voice and when to let it burst forward – knowing the audience is measuring every coloratura trill and rubato freedom. And what a voice! She manages the appearance of whispering that actually penetrates the back seats, and then explodes in vocal acrobatics that more than fulfill any aficionado’s demands. Her singing is warm, rapid and controlled while retaining a natural quality that can only grow her reputation.

The antics of Andrew Wilkowske as the exasperated Dr. Bartolo and of Peter Volpe as the scheming basso Basilio were crowd pleasers – and Volpe had some impressive depths in the “slander” aria — but Wilkowske too often demonstrated the exaggerations of style that for me distracted more than advanced the humor and cut into his vocal presence. An exception – his cleverly timed pretense of being asleep when the lovers are scheming.

The sets imported from the Utah opera are visually striking – imagine an Italian villa as a gingerbread house —  and the wigs and costumes turn every moment into a pictorial tableau. But the sets also require exits and entrances that imposed exaggerated behavior on the performers. The sets – as well as the size of the chorus — forced drawn-out stealthing from place to place or motion designed to fit every turn of the music when the music didn’t need such assistance.

The Barber of Seville Gallery 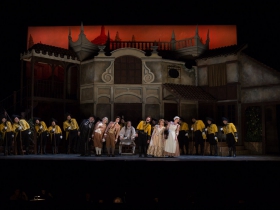 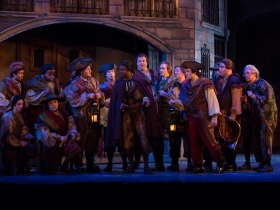 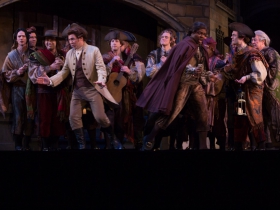 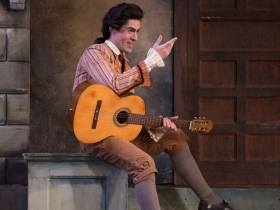 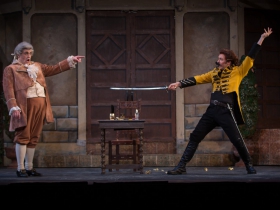 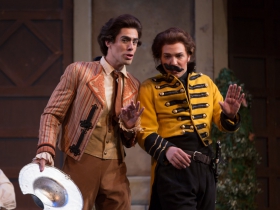