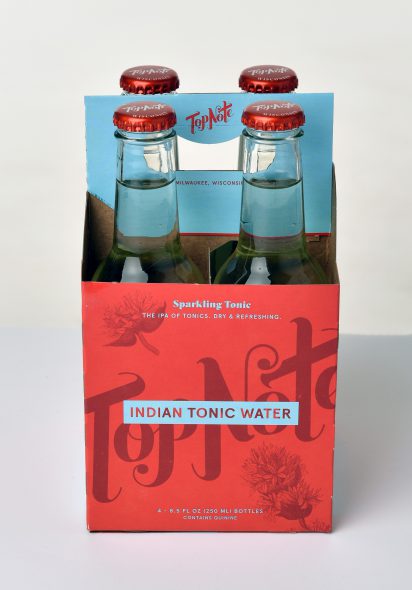 Top Note Tonic, the local company led by the husband-and-wife team of Mary Pellettieri and Noah Swanson, has just won a sofi New Product Award for its Indian Tonic Water.

“This award is like winning an Oscar in innovation for a beverage,” said Pelletieri in a press release. “We are floored by the recognition so early in our journey.”

Considered the highest honor in the $127 billion specialty food industry, a “Sofi” stands for Specialty Outstanding Food Innovation and represents the best of the best from members of the Specialty Food Association.

Traditionally, tonic brought some herbal benefits to a drink and also balanced an overly sweet spirit. However, Pelletieri said that tonics have deviated from their origins.

“Tonics had become commoditized,” said Pelletieri in a press release. “The idea of a digestivo-tonic is something that is not part of our vernacular anymore.”

Pelletieri is a botanist and food and beverage industry veteran who saw an opportunity to introduce a more balanced product in a market otherwise dominated by sweet and highly artificial tonics. She said that from the beginning, the company’s goal was to change the way consumers think about tonic water. The couple has developed their own modern take on soft drinks, creating all-natural drinks with less sugar that are similar to apertivo soft drinks commonly found in Europe.

“In brewing, it’s about crafting a balance between bitter, sour and sweet,” says Pelletieri. “I wasn’t afraid to play with the bitter spectrum that ranges from a softer, earthier taste to a sharper, quenching hit.”

As their website notes, the couple has set out to bring back the old-time, seemingly lost notion of a tonic which was “a bitter botanical drink made by pharmacists for health and vigor.”

Top Note Tonic can be found at Sendik’s, Outpost and Woodman’s, along with specialty locations like Mod Gen, Groppi’s and Great Lakes Distillery. The new 4-pack of 8.5 oz. bottles have a suggested retail price of $6.99 with each bottle delivering two servings per cocktail.

The ingredients in the ready-to-drink mixers are non-GMO and include all-natural roots, fruits, herbs, spices and real cane sugar. All varieties are gluten free, contain half the sugar and do not have artificial colors or preservatives. The Top Note Tonics name comes from the field of sensory science: top notes are the ephemeral aromas found in beer, wine and spirits that produce a multi-sensory experience.

As an earlier story on the company by Urban Milwaukee reported, Pellettieri has a long history in the beverage and food industry. After graduating from North Carolina State with a degree in Botany, and then went on to pursue her Masters in Environmental and Occupational Health at the University of Illinois at Chicago. She worked at the Siebel Institute in Chicago, where she learned all about conducting the sensory analysis of beer, went on to work at a food testing lab on the south side of Chicago, followed by a job leading the lab program at Goose Island, a craft brewery located in that city. She came to Milwaukee to run the Quality Control department at MillerCoors.

Pellettieri met Swanson in Chicago and the two had long talked creating their own company. She started brewing the tonic concentrates in her home. Swanson was critical to the development and refinement of the original Top Note Tonic recipes. He would taste test the results and give his input on what might be changed about the recipe. Swanson currently handles operations for the company.

After a year of brewing out of the kitchen of the couple’s Milwaukee home, Top Note Tonic had become successful enough to expand into a facility in Bay View, on the third floor of the Lincoln Warehouse at 2018 S. First St.