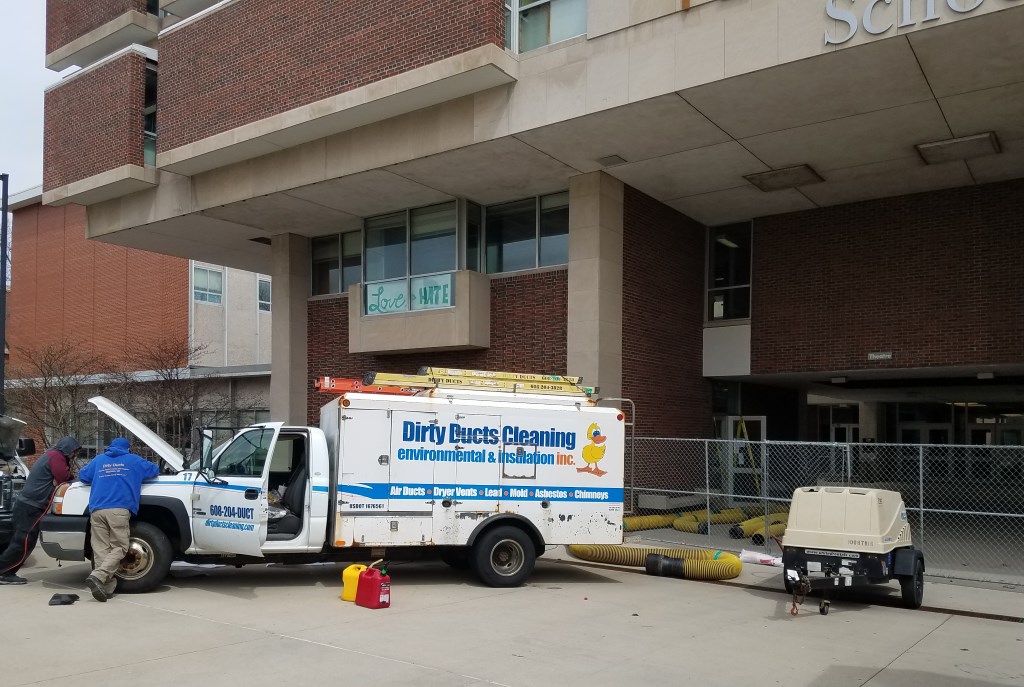 Classes returned to the music wing of the UW-Milwaukee’s Peck School of the Arts building Monday, following a fire that started in the theater building.

“The major things that were completely destroyed were those in the theater area,” says Scott Emmons, dean of the Peck School of the Arts. “The set pieces in particular were pretty burnt.”

As a result of the damage, the production of the Tom Stoppard play, Arcadia, will move to the Milwaukee Repertory Theater, according a press release by the university. The play, originally scheduled to run May 3-7 in UWM’s Mainstage Theatre, will instead be performed in the Rep’s Stiemke Studio. The switch has required students to quickly reimagine scenery, props, costumes, as well as recreate staging, lighting and sound to get rehearsals back on schedule. Shorewood High School has pitched in, providing space for UWM students to work until the Stiemke Studio is available.

The fire, which was reported about 10 p.m. on Saturday April 8th, is believed to have started accidentally in the set and scenery shop behind the 500-seat Mainstage Theatre. The theater building suffered fire damage, and the music and art buildings have smoke and water damage. The Arcadia sets were destroyed, but many costumes and props were salvaged.

The theater building will remain closed until fall.

Last Tuesday, the arts school scheduled and relocated over 180 courses to minimize the amount of missed classes. Art and design classes will be returning to the third and fourth floor of the art building today. The basement, first and second floor will take a little longer.

Ben Talatzko, a UWM Community Arts major and visual artist who goes by the moniker BTAL, says the fire has been a little bit of a workaround but nothing too crazy.

“For me it’s just a pain because I can’t use the printmaking stuff for art right now and we may have to relocate at Kenilworth where we don’t have all the dank oil-based inks,” he says.

While recovery hasn’t been easy and there is still a lot more work to be done, Emmons is thankful for those who have chipped in thus far.

“We have received a generous outpouring of support from the arts community, including this invitation to allow our students access to not only perform in a world-class facility, but the opportunity to work side-by-side with professional theater staff,” said Emmons in a press release. “If there was a silver-lining, this would be it. These experiences build more than sets – they build character and strategic and flexible thinking, a skill set that isn’t as easily taught in a classroom.”

One thought on “UWM Recovering From Fire”