As regular readers of this column know, I believe that data analysis can help us understand the effects of public policy. That said, data are often used by advocates to mislead. Two of the tricks used to mislead are finding false causality and selective use of data.

Recent attempts by the Wisconsin Manufacturers and Commerce (WMC) to defend the Manufacturing and Agriculture tax credit give a handy illustration of both of these strategies.

WMC’s argument in favor of the tax credit was triggered by a proposal from a coalition of Wisconsin non-profit organizations containing a package of initiatives to tackle some of the Wisconsin’s most intractable problems, including lead pollution, opioid addiction, joblessness and poverty, and illiteracy. Called a “Wisconsin Budget for All,” the package would cost about $459 million annually.

The plan’s authors earned the WMC’s enmity by proposing that most of the needed funds come from ending the Manufacturing and Agriculture tax credit (MAC). The other source would be eliminating the preferential tax treatment of capital gains on state returns. The MAC was passed in 2011 as part of the 2011-13 state budget and began to partially phase-in during 2013. The credit takes full effect with 2016 filings.

Mounting a spirited defense of the tax credit, WMC released a statement:

The manufacturing and agriculture tax credit has given a boost to businesses that create family-supporting, middle class jobs all across our state, and it is imperative that we keep it in place.

The evidence offered by the WMC consists of the following:

So far as I can tell, this is the totality of the evidence cited by the WMC for the proposition that the MAC is a job-creator. The same numbers were quoted in a Wisconsin State Journal article when the WMC was asked for comments on the Wisconsin Budget for All proposal.

The WMC’s strategy is an almost perfect illustration of the causality fallacy because it ignores the huge elephant in the room, the Great Recession. Although it is not clear what exact periods WMC chose (more about this later), it is clear that the 81,000 lost jobs were lost because of the recession, not because of the lack of a manufacturing tax credit. Likewise, the 34,000 job gains figure covers a period when the economy was clawing back from the recession.

One way to separate the effect of economic trends from that of the tax credit is to compare job gains and losses in Wisconsin to those in the overall US economy. The first graph below compares manufacturing jobs nationwide (in yellow) with those in Wisconsin (green). In order to put the two on the same scale, I used indices in which the number of jobs in January 2013 was set to zero for both Wisconsin and the US. I chose 2013 as the base year, because that was the year that the MAC started to phase in. 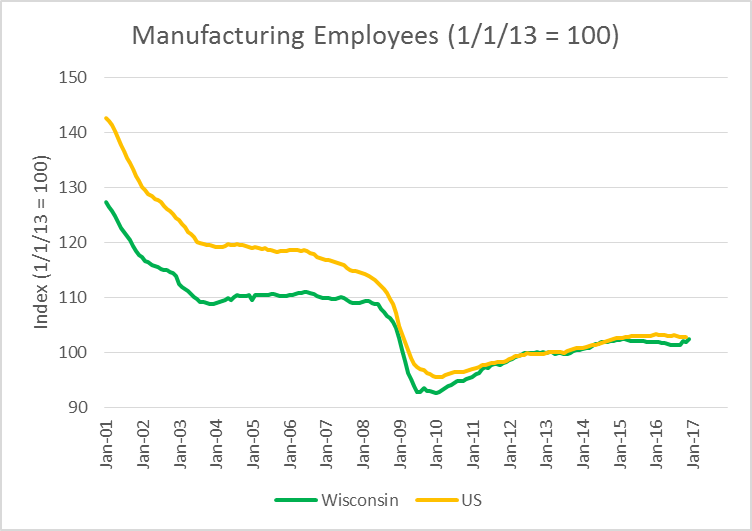 During the Great Recession, there was a substantial decline in manufacturing jobs, both in Wisconsin and nationwide. Although it is small consolation to those who lost their jobs, Wisconsin’s loss was somewhat smaller and its early recovery was slightly better than that of the average state.

The relevant question, however, is what happened once the MAC started to phase in. If it led to more jobs, one would expect that Wisconsin jobs would grow faster than those in the rest of the US. Instead, Wisconsin has closely tracked the national numbers.

The next graph shows the behavior of 5-year job losses and gains in Wisconsin over time. Depending on which period one chooses they can be made larger or smaller. The graph looks so strange because its ups and downs are determined not only by job numbers at the end of the period but also those at the beginning. 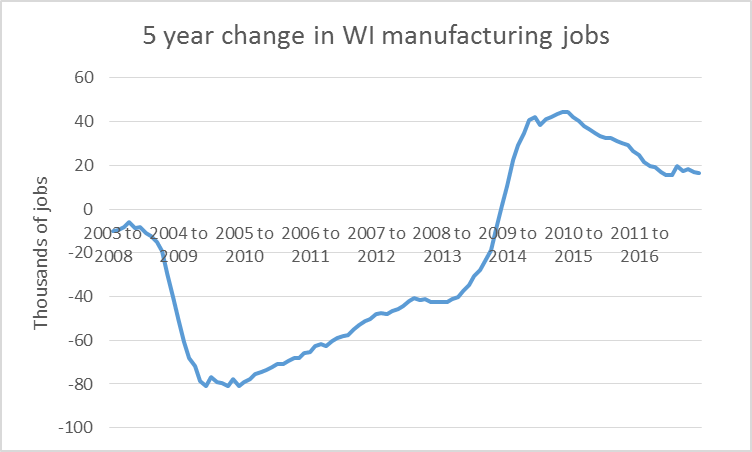 Evidently WMC decided to pick a month with the largest gap between its job total and that of the same month five years earlier. The largest such gap is 81,000 jobs, found in three months in late 2009 and early 2010, at the height of the Great Recession. Evidently WMC chose one of these months to represent the period before the tax credit.

In choosing a five-year period to represent the post-credit job gains, WMC was a bit more cautious. Rather than picking the period ending in early 2015, which would have given a gain of 44,000 jobs, it seems to have settled on July of that year, giving about 34,000 jobs gained. Still, this is a good deal better than the most recent 5-year gain–16,000 manufacturing jobs.

Of course, WMC’s job is to protect the interests of its members. A large government subsidy, particularly one that eliminates most taxes is not to be sneezed at. I am reminded of a comment that the conservative Nobel economist George Stigler made in a speech to a group of CEO’s. He explained that as an advocate of the free market, if one of his audience announced that as a matter of principle he or she would refuse any government subsidy, he (Stigler) would write a letter of praise… and sell the company’s stock short.

Most serious students of attempts to grow jobs through tax subsidies find them ineffective. Perhaps that’s why the WMC falls back on such weak arguments.