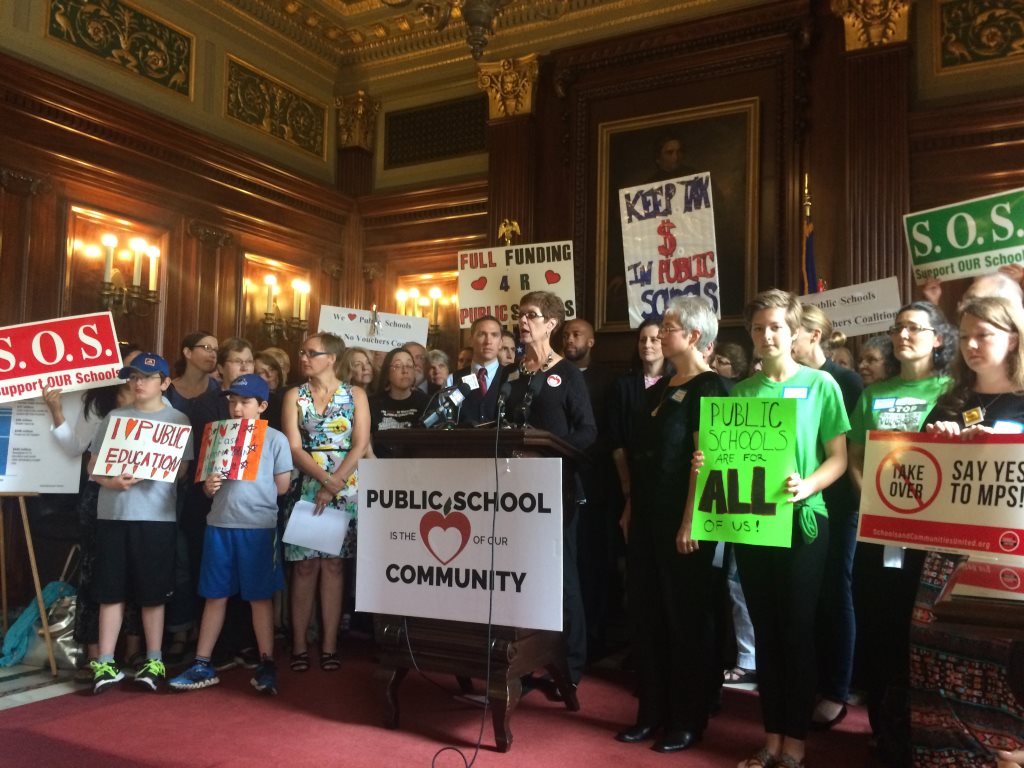 Pictured at the podium is Sandy Whisler from the grassroots group Citizen Advocates for Public Education based in Lake Mills, WI. Photo taken June 2015.

The recent spring ballot gave Wisconsin voters sixty-five opportunities to cast votes on public school funding requests ranging from new facilities to basic operations. In Northern Wisconsin communities voters were able to approve an increase for classroom education and deferred maintenance in one district and decide against spending on a new facility in another.

Unfortunately — when it comes to state-mandated spending on voucher schools — voters didn’t have the same chance. State law mandates payouts to the statewide voucher program, which are significantly higher than the average state aid per student to public schools. And a change in the 2015 GOP state budget takes that higher payment directly out of public schools, leaving property taxpayers to make up the difference if it’s made up at all.

That’s why I worked with three of my colleagues to draft a bill that will give school district voters the same oversight of voucher spending that they currently have over public school revenue limits. Our legislation is simple and straightforward: No funds can be taken from a school district to pay voucher schools unless voters in that district approve in a referendum.

This legislation would not end taxpayer-funded voucher schools. It would simply give voucher school operators and their lobbyists the responsibility to make the case for the quality and value of their schools directly to the hard-working taxpayers and local voters who pay for them under current law.

Wisconsin’s public schools have long been national leaders and are the cornerstones of our communities, especially in rural and northern Wisconsin. These public schools have gone to referendum 334 times for operating costs and another 324 times for debt or new facilities since 2011. Even including modest increases the Governor proposed in his budget, state aid that supports public schools and reduces property taxes will not even keep pace with inflation over that period.

At the same time, and with no taxpayer oversight or control, spending on voucher programs in Wisconsin has more than doubled since the first Republican budget in 2011. Untold amounts are funneled from taxpayer-financed voucher schools to organizations that pay lobbyists to demand ever more from taxpayers. And local property taxpayers lose more to the voucher program than state aid would have brought in.

Voucher lobbyists themselves said recently that property taxpayers make up the difference, and then some, between state aid to public schools and state payments to voucher schools that are $1000-$1700 higher per student in the Governor’s budget. (Imagine how much lower your property taxes could be if the state’s commitment to public school students matched the amount my Republican colleagues pay out per student to voucher schools.)

It’s time for taxpayers to have a say in whether they want their dollars taken out of the schools that have served generations of Wisconsinites very well to fund the voucher industry. As long as voucher schools are being paid for by local taxpayers and districts are forced to face the voters to keep the lights on, local voters should have the same say on voucher spending they have on public schools.

State Sen. Janet Bewley, D-Ashland, is a member of the Wisconsin state Senate.