April 22 march planned in 294 cities, many in Great Lakes region. 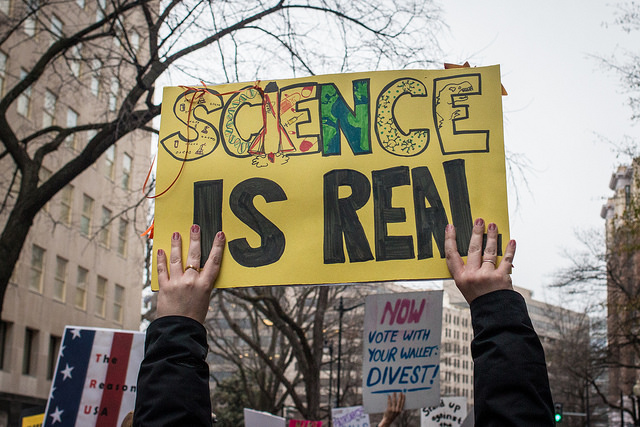 Marches will be held around the globe in support of science. Image: Liz Lemon, Flickr

Science advocates across the nation will step out of their labs and call attention to the value of science in the March for Science on April 22.

Launched by scientists and researchers in Washington, D.C., earlier this year, the nonpartisan March for Science has expanded into 294 planned satellite marches across the nation. Of those, 92 are in Great Lakes states, including one planned in Milwaukee. Each march is operated independently.

Milwaukee, given its location on the shores of Lake Michigan, will have a very heavy conservation and water quality focus for the march.

“By Milwaukee taking a leadership role in this and taking a stance that this is how we want clean air and clean water, we lead by example for other communities like Appleton and Green Bay to demand the same out of themselves,” said Elizabeth Ferris, the media lead on that city’s march. “So we can really create expectation for other people to do the same.”

The effort for a march in Lansing, Michigan was started by science enthusiasts Sara Pack and Sierra Owen of Lansing.

“The march is meant to serve a group of scientists and science supporters who feel that the current political climate of science denial, defunding, gag-orders and ‘alternative’ facts is dangerous,” said Andrew Biggie of East Lansing, the outreach team leader for the March for Science in Lansing. It’s a climate that is dangerous not only to the future of the vast field of sciences, but to the planet and all life on it.

“I think this administration has caused a frenzied increase in anti-science legislation and sentiment,” Pack said.

Pack said she is angry that the government did not follow what science data and research showed in the Flint water crisis.

“The scientific research proved time and time again that the chemicals used to treat the water were too corrosive and should not have been used,” Pack said. “Choices that caused the problem in the first place were not evidence-based. The science was flatly ignored for financial reasons.”

March organizers are unsure about the future of science education.

“You see a lot of public budgets being minimized. The budget for universities of Wisconsin system is being minimized,” said Brandon Gross, a research specialist in the School of Freshwater Sciences at University of Wisconsin-Milwaukee and media spokesperson for the march.

“University of Wisconsin-Milwaukee was recently upgraded to tier one research institution,” Gross said. ”Simultaneously, the budget has been cut significantly.”

Policy makers don’t seem to consider science-based facts, he said. “We have states like North Carolina and Florida aren’t even allowed to use the word ‘climate change’ in state buildings, when we have scientific consensus that climate change is the reality. So we obviously have many issues in valuing evidence.”

“Milwaukee has potential to be at the forefront of the water industry in general,” Gross noted, “but we can only seize that opportunity if we invest in that. We need educated students that have the tools to become the industry leaders in freshwater science.”

About 10 cities in Ohio are holding the march. The organizers in Cleveland said they already had some warm-ups for it.

“Between now and the march, we had a karaoke night to benefit the March for Science, said Patricia Princehouse, the director of evolution biology program at Case Western Reserve University. “It was so much fun. We created special drinks: one they are calling ‘the earth’ and another one they are calling ‘global warmer.’”

“You don’t have to be a scientist, you don’t have to like science, but you do need to demand to understand what is going on science because it affects you everyday,” Princehouse said.

“A lot of our economy here depends on the lake, it will be a catastrophe to local business if the funding gets cut. It’s not just Cleveland, it’s all around the Great Lakes.”

Further information about all marches can be found on the March for Science website.

A version of this story was originally published by Great Lakes Echo.