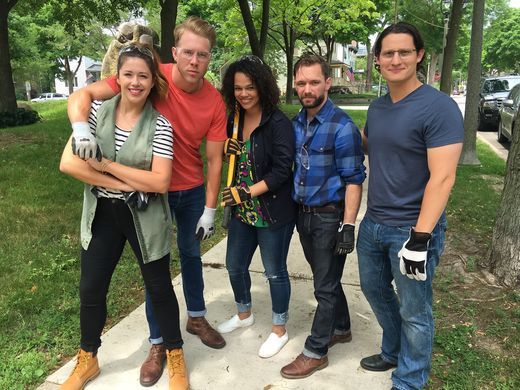 Five Milwaukee-area natives are bringing the DIY home improvement craze right to Milwaukee with a new show on HGTV called “My Flippin’ Friends.”

The show is about a group of friends working together to buy and sell properties in their hometown of Milwaukee, Wisconsin. In each episode, the team will take on a new home for flipping.

Radosevich, who founded the DIY design company I SPY DIY, says that the network will determine if the show gets a full-season based on the waves that the pilot episode creates.

The pilot took 14 hours to film, but the Walker’s Point home that was renovated took months of work, she told WISN-TV. “The process was pretty quick,” she said. “We had to flip the house in three months. It was a crazy process because we had cameras and everyone was wondering what was going on in the neighborhood.”

She believes the show may stand out because most HGTV shows feature couples. “I think it’s a cool spin on it,” she told the Journal Sentinel, “because there are a lot of characters — there’s five of us. … I think it’s going to be fun to watch all the different story lines that can come out of that, because there’s so many of us at so many different points in our life.”

She also hopes that a show set in Milwaukee, with more affordable homes than in bigger American cities, might give it more appeal.

On Sunday, April 2, the pilot episode of the house-flipping show will premiere at 11 a.m. on HGTV. Radosevich posted  a preview of the pilot on Facebook.

As she declares in the trailer for the pilot, “Friends who flip together, stick together.” And do TV together, she might have added.