Testing For 22-Story Building on Prospect 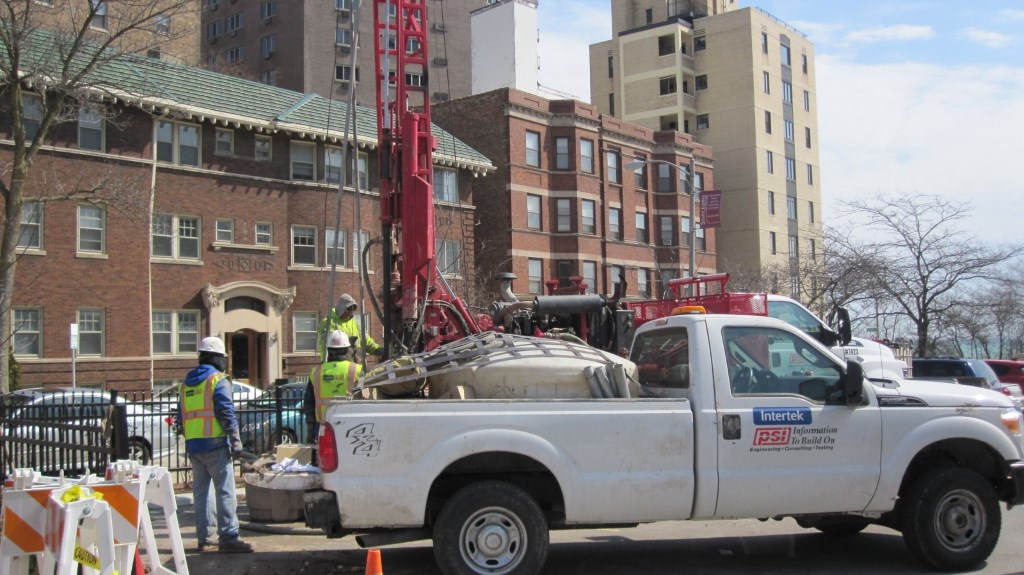 Early Thursday morning, a crew of three boarded their white Ford trucks at the Waukesha yard of Intertek PSI, an Illinois based engineering firm with dozens of locations in the US.

The largest of the trucks was a Ford F250, outfitted with a red Intertek drilling rig. The three were headed to the southeast corner of N. Prospect Ave. and E. Kane Pl. in Milwaukee, where six spots on the surface lot of Saint John’s on the Lake had been cleared by staff for their arrival.

As Urban Milwaukee was first to report in January, Saint John’s is considering building yet another independent living facility on the site.

The Intertek PSI crew was there for the crucial initial process of extracting core samples of the underlying earth.

These data will be used by engineers to determine the appropriate foundations for the proposed building, the size of which has not been announced by Saint John’s.

“They’re talking about putting up a 22-story building here,” one of the crew members said as an approximately five foot length of small diameter bore (about 1-1/2 inch interior diameter) hollow pipe was threaded to a series of others that had already been pounded into the earth by 11 a.m.

Determining the best footings for a 200-foot tall building requires extracting a number of samples up to about 100 feet into the earth to find out what lies below. The site lies at about 650 feet elevation above sea level, with steep bluffs at its eastern edge. The shores of Lake Michigan, no more than 500 feet distant, lie 75 feet below this plateau.

“We’re at 95 feet down now,” the worker said, as the pipe, now threaded into place, was pounded into the earth by the towering pile driver, making relatively little noise compared to the much wider pipes that will one day be noisily pounded to serve as a foundation for the proposed tower.

So what lies below? It is almost certain to be clay, at least beneath the top ten feet or so which may include the residue of at least two previous buildings from two different eras on the site, once a Civil War camp.

“About 65 feet down you get into a hardpack clay,” the crew member said, as the pipe slid easily into the earth. What if the crew encounters a large glacial granite boulder? Every construction crew eventually does once they excavate for a project like this. Our subsoils are littered with glacial boulders, some quite large.

“Usually we can bust through them. About 125 feet down you run into bedrock. We’ve got hollow tips with diamond blades that can saw through it.” Chances are, these probes will come up about 50 feet short of the bedrock, which lies about 150-feet deep in these parts.

The crew will perform this soil testing operation at five other locations on the roughly 5,000 square foot site, and expects to be on the job for several more days. 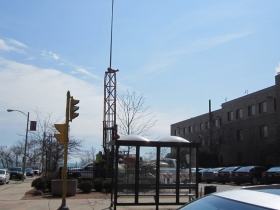 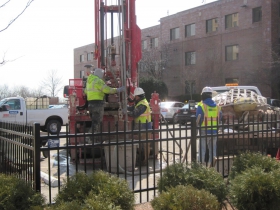 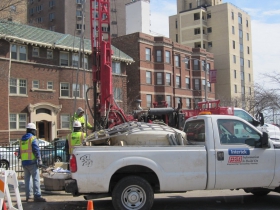 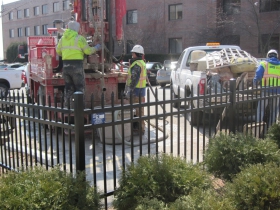 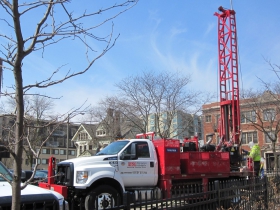 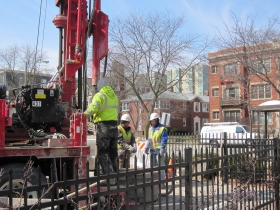