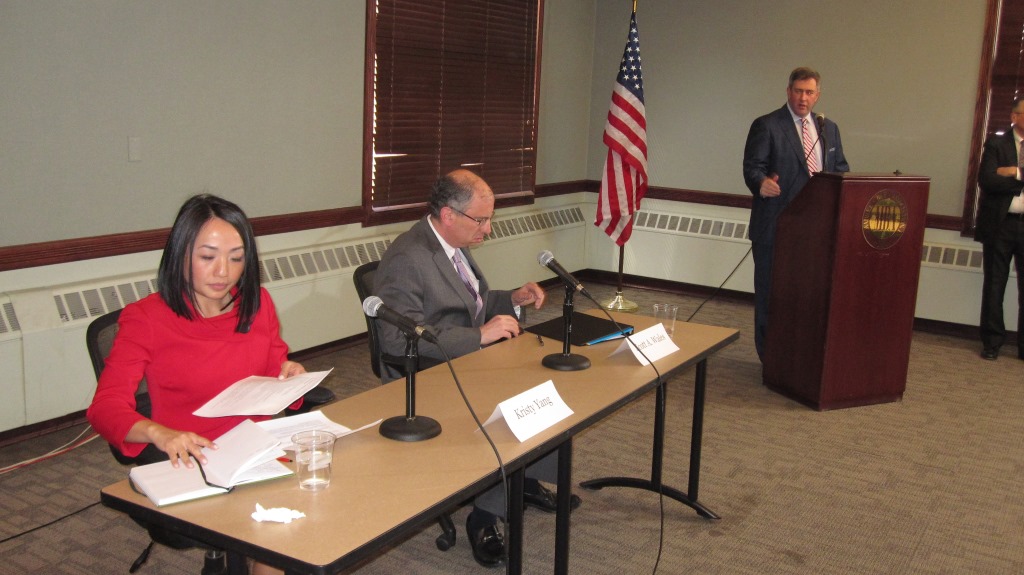 Kristy Yang and Scott A. Wales. Photo by Michael Horne.

In the only contested race for a seat on the Milwaukee County Circuit Court voters have a choice between a defense attorney who also serves as a suburban municipal court judge or a family law practice attorney. Both aspirants for the seat to be vacated by Branch 47 Judge John Siefert appeared at a judicial forum held by the Milwaukee Bar Association Thursday, March 15th, at the association’s downtown office on E. Wells St.

The Candidates and Their Practices

Scott Alan Wales has a private practice downtown. He is a 1987 graduate of the University of Miami Law School, and was admitted to the Wisconsin Bar in 1991. He has tried 996 cases in circuit courts, mostly in Milwaukee, Waukesha and Ozaukee counties. Many are misdemeanor traffic, drug or theft cases, although Wales also has clients facing serious felony charges.

Since 2009, Wales has served as the municipal judge of his home town, the Village of Fox Point, which gives him the right to refer to himself as “Judge Wales” in his campaign literature. Court is in session twice a month in the quiet North Shore suburb best known for the Mary Nohl House and the Chipstone Foundation. The average case load per court night is “60 to 100,” according to Wales. In 2015 he heard 1,131 cases. Of them 870 were traffic related, 188 were ordinance violations, and 71 were parking tickets. Wales assessed $83,833.47 in fines, forfeitures and fees that year.

Three hundred-seventy nine defendants failed to appear or pay their fines, leading to 58 municipal warrants, and the suspension of driving privileges of 282 people in 2015 by Wales.

Wales and his wife have lent the campaign $65,000 according to campaign finance reports.

The Wales for Judge tagline is “Experienced. Independent. Impartial.”

Kristy Yang of Oak Creek has a private practice focusing on family law and Social Security issues. She practices downtown under the name of Kashoua Yang LLC. She has also been identified as Kashoua Thao (in an October 2016 contribution of $100 to Mandy Wright) and as Kashoua Yang Thao in her September 2016 appointment to the City of Oak Creek Community Development Authority, which was announced subsequent to her campaign declaration.

Yang is a 2009 graduate of the University of Wisconsin Law School, which she entered after a career with the Kohler Company. She has had 127 cases in circuit courts in Wisconsin, nearly all involving divorce, paternity or custody issues. She has occasionally served as a guardian ad litem. She is also involved in Social Security matters for clients.

Yang lent her campaign $2,100 according to finance reports.

Her campaign tag line was “Justice for All,” changed in November to “A Firm Hand and a Valuable Perspective.”

The Milwaukee Bar Association has held a Spring Election candidate forum for all contested judicial seats for the past 25 years. The host was Judge John DiMotto, who spoke after introductory remarks from MBA President Andy Wronski (U. Minnesota Law 1994), a Foley & Lardner partner, House Confidential Honoree and master of  Brewer’s mascot Hank the Dog.

DiMotto said the judicial forum “aids the elective process and gives people a chance to participate other than by just going to the ballot box.”

DiMotto reminded the audience that besides the sole contested seat, 11 other judgeships will be on the ballot April 4th. Most of those judges were in attendance, along with about 40 others, most of whom were attorneys or law students.

Mitch Teich, on staff at WUWM since 2006, was the moderator, tasked with asking questions of the candidates, some of which were submitted by judges and attorneys present and vetted by DiMotto.

The first question was about their qualifications as a potential circuit court judge. Wales, who had won a coin toss prior to the event, was given 2 minutes to respond.

He alluded to his affliction with the neuromuscular condition known as Moebius Syndrom, which causes a partial facial paralysis. He was bullied as a youth, but he overcame obstacles not by self pity, but by its alternative of struggling to accept it, recognizing that there are good days and bad days for everybody, he said.

Wales added that when people have a bad day, such as appearing before the judge in Fox Point Municipal Court, “people expect you to listen to them.”

He added that due process means:

Yang said that “people expect finality,” when in court along with “procedural fairness, empathy and compassion.”

She countered Wales’s pronouncement of his court experience as a qualifying factor by referring to her life experiences, which included an early childhood in a refugee camp in Thailand and her arrival with her large family (which grew to include 10 siblings) in Wisconsin at age 6. She stressed that she was self-made in every respect as to her education, and paid her own way through college.

“I do have experience,” Yang said. “Is it quality or quantity? I’ve been recognized for the quality of my work.”

Prior to attending law school, Yang worked at the Kohler Co., where she was assigned to “travel the world resolving manufacturing issues.”

She referred to her “life experience,” in addition to her work experience in business and law that made her the superior candidate. “It comes not from legal experience alone, but from life experience.”

Wales rebutted that by saying he had been a lawyer for almost 30 years, and that his experience is “both quantified and qualified.” He said his opponent has “no trial work” experience, and that her Social Security practice “is a Federal matter.”

Wales said he has represented people in children’s court (where new judges are often assigned) and has dealt with very sensitive termination of parental rights cases. “I’ve represented these people.”

Yang again cited her experience “running international projects.” She added that she was experienced in project management, and even manages her own calendar. “I have a private practice, and a very successful private practice at that.”

Each candidate was asked to name two judges they admired most.

Yang cited Judge Carl Ashley, who was in the room. She said she “felt heard, felt respected” by Ashley and that he “treated people with dignity.” She also cited Judge Paul R. Van Grundsen, also in the room, saying she “appreciated the way he approached each issue.” Both have endorsed her candidacy.

Wales went next. “Only two?” he cracked to the room full of judges. He mentioned the late Judge Terry Evans, (1949-2011) who rose from a childhood in the Riverwest neighborhood to a seat on the Federal bench. In 2007 Evans was the first Federal judge to cite a You Tube video in a decision. He was known for his wit and general good humor.

The candidates were also asked to talk about “the most difficult decision they ever made in life.”

Wales said it was having to repose entire trust in a doctor to treat his very ill 10-year-old child some years ago.

Yang said it was when she “left a very comfortable job in Kohler to go to law school.”

Judicial candidates have traditionally relied on endorsements of others as a major campaign tool, particularly since they are circumscribed in the extent of political activities to which they can be engaged. Interestingly enough, these rules were somewhat relaxed due to the activities of Judge John Siefert, who now holds the seat. Siefert successfully argued that judges could contribute to and support partisan candidates.

However, the endorsement route is still significant in judicial campaigns.

When Wales announced his candidacy, he had the support of only one circuit court judge, J.D. Watts. He has since lined up the endorsements of 22 sitting Milwaukee County circuit court judges, which is a good showing as these things go.

Yang lists four Milwaukee County circuit court endorsements, including those of Ashley, and Van Grunsven, whose name was listed twice among the supporters.

The pair have split endorsements from unions, and each lists the support of over 100 attorneys. Interestingly, Yang’s supporters include Atty. Sonya Bice, the wife of Journal Sentinel reporter and columnist Dan Bice, who ordinarily would love to report the following story:

An Endorsement Retracted, and a Surprising Response

When Wales announced his candidacy for Branch 47 it was not yet known if Siefert would retire or fight for another term. It is quite rare, as we can see from this year’s election, for a sitting judge to face opposition, but Wales made the plunge.

The Wales camp hoped Yang would run against Cynthia M. Davis, who was appointed to the bench by Gov. Scott Walker in 2016. At that time Yang received endorsements from Glendale Mayor Bryan Kennedy and Rep. Daniel Riemer (D-Milwaukee). Yang, who naturally preferred to run for an open seat, opted for Branch 47 when it became clear around October that Siefert would not run. (He filed his declaration of non-candidacy in December.)

The Wales campaign noticed the Kennedy and Riemer endorsements that were given based on the earlier scenario where she would challenge Davis remained on the website. The endorsements are not necessarily transferable. Indeed, Kennedy’s name is now listed among the endorsers of Wales. It was confusing when his name was on both lists.

Julia Lazarski, communications director for Wales, sent a letter to the Yang campaign asking that the names be retracted.

“We empathize because of the immense hassle of calling through large lists of phone numbers to secure support, and the massive amount of resources and focused effort careful endorsement list building requires,” she wrote.

This letter by the Wales campaign is just old fashioned politics designed to rattle the opposition, but it produced a vehement response from Todd Robert Murphy, or “T. Bob,” as some have dubbed him — a veteran political consultant known for his hard-ball tactics who had been gone for the local scene for some time.

“Really… you’re going to go to some politicized childish game like whining over a possible mistake. Aren’t the Mayor of Glendale and St. Rep. Riemer capable of responding on their own?,” Murphy responded.

“Mistakes happen. … The temerity of ‘demanding’ within a time frame that we remove their names is not the bastion of your responsibility. …

“Which begs the question, Has Mr. Wales surrounded himself with a gaggle of obsequious pissants or is he unaware of your actions? … Why don’t you just go away?”

Results of the judicial qualification poll held by the members of the MBA will be released early in the week of March 27th. Members are asked to rate the fitness of the candidates for judge.

Video of the Forum

3 thoughts on “Plenty of Horne: Wales and Yang Spar at Forum”