A Tribute to Appalachian Folk Songs 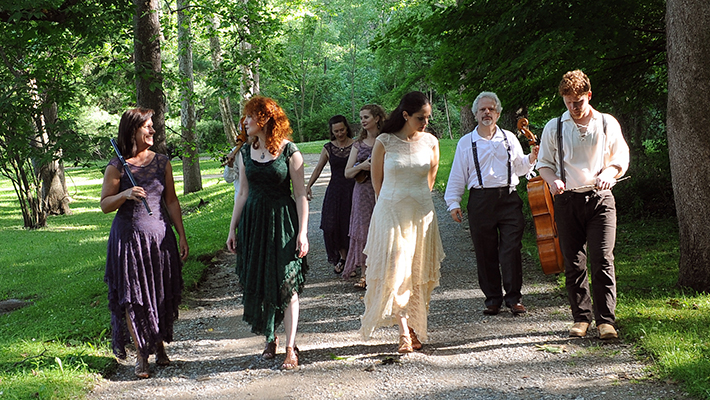 The Early Music Now concert this Saturday, entitled “Sugarloaf Mountain: An Appalachian Gathering,” features the group Apollo’s Fire and brings the early music movement to America. For some of my friends, the American Songbook of Broadway show tunes and jazz standards were the sounds of their early formative years. Others of my generation may have focused on Elvis or The Beatles. I most remember folk music – the Weavers, Joan Baez, Peter Paul & Mary and others. These songs often were rooted in an older rural American traditions, like the music of the Appalachian mountains and those in turn reflected a synthesis of even older traditions. Celtic peoples who settled in Scotland, Ireland and elsewhere in the British Isles sang the same songs in the 15th and 16th centuries that were reclaimed as new in the 1960s and ’70s by an American urban generation.

Apollo’s Fire, an early music ensemble based in Cleveland, has established a reputation as a premier performer of early music. Their recordings include Monteverdi‘s Vespers, Bach‘s Brandenburg Concertos and Handel arias. But they also have explored music inspired by the melding of folk traditions by immigrants to America. Artistic Director Jeannette Sorrell grew up in Virginia’s Shenandoah Valley. She has extensively researched the musical threads that come together in this region. Apollo’s Fire has released “cross-over” albums including Come to the River: An Early American Gathering, Sacrum Mysterium: A Celtic Christmas Vespers and the album featuring the music of this concert – Sugarloaf Mountain: An Appalachian Gathering.

Artistic Director, Charles Sullivan, finds this program choice entirely appropriate for Early Music Now. “The depth of research that Jeannette Sorrell brings to this program, and the specific skills and background of each of the eight performers guarantee an exceptional experience for our audience. The program also highlights another facet of our tagline “Across Borders — Across Time,” in that it brings together music with roots in many centuries and cultures. The fact that much of the music has Celtic roots, and that we were able to schedule the program on St. Patrick’s Day weekend, is an added bonus!”

Program notes suggest the concert will reach back in time to explore:

…the earliest roots of the Appalachian heritage. The immigrants from the British Isles who made the crossing and built the Appalachian community were mostly from the impoverished lower classes. They left their beloved isles of Scotland and Ireland due to endless years of unemployment, hunger and civil strife. The ballads they brought with them, which date back to the Renaissance and in some cases the Medieval period, include many that are dark and haunting. Topics such as murder and even fratricide are very common in this repertoire; but there are also delightfully playful children’s songs. In short, life was hard back in the home country – and it was still hard in the Appalachian hills. But it was also filled with joy and laughter.

Old world traditional root were subject to additional cultural synthesis in America. The program will include music reflecting the “old-time religion” and the infusion of African-American spirituals into the mix. 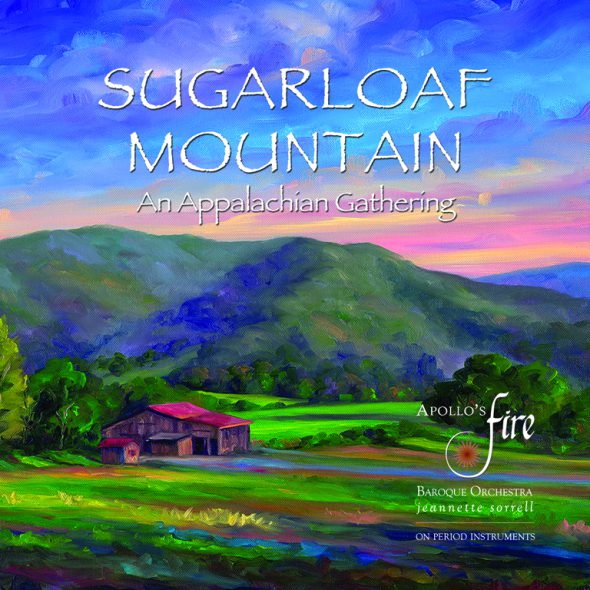 The Sugarloaf Mountain CD, released in 2015, debuted at No. 5 on Billboard’s Classical Crossover charts. Gramophone Magazine observes that the songs “tap into America’s hardscrabble Southern roots with grace and power… with music that asks questions about life and death, and bores into the American national psyche at visceral and emotional levels. Beautiful and eloquent… infectious energy.”  Fanfare Record Magazine observes that the music is ” “wonderfully fresh… exuding utter authenticity, contagious kinetic energy, and a totally free-wheeling spirit.”

A sample of the concert music may be found here. Explore YouTube further for many other Apollo’s Fire performances.

This concert is preceded by Early Music Now’s annual Silent Auction and Chocolate Reception, beginning at 3:00 p.m. A 30-minute intermission will also allow for final bids. The chocolate feast may be limited by then, so save some time before the concert to explore the auction and reception.

The concert will take place at the UW-Milwaukee Zelazo Center at 2419 E. Kenwood Blvd. on Saturday, March 18 at 5:00 p.m. The complete program, including texts and contextual notes, is available at the Early Music Now website.

The final concert of the Early Music Now season on April 22 will feature Infusion Baroque, an ensemble of Baroque flute, violin, cello and harpsichord exploring French Baroque music with an intriguing twist – an investigation of the murder of French court composer Jean-Marie Leclair (1697-1764).

‘Does My Vote Matter?’ by Isiah Holmes

Biden Up 9% in Final UW-Madison Poll by Laurel White