The Fine Arts Quartet, (violinists Ralph Evans and Efim Boico, cellist Robert Cohen and violist Juan-Miguel Hernandez ) returns to the UW-Milwaukee Zelazo Center this Sunday afternoon for the third concert in the 2016-17 series. Pianist Alon Goldstein and string bass player Rob Kassinger will join the FAQ for an arrangement of Wolfgang Amadeus Mozart‘s Piano Concerto No. 24.

An accomplished concerto performer, Alon Goldstein has played with the Philadelphia orchestra, the Chicago Symphony, the San Francisco, Baltimore, St. Louis, Dallas, Houston, Toronto and Vancouver symphonies as well as the Israel Philharmonic, London Philharmonic, Los Angeles and Radio France Orchestra. He has taught summers on the teaching faculty of the Stearns Institute of the Ravinia Festival 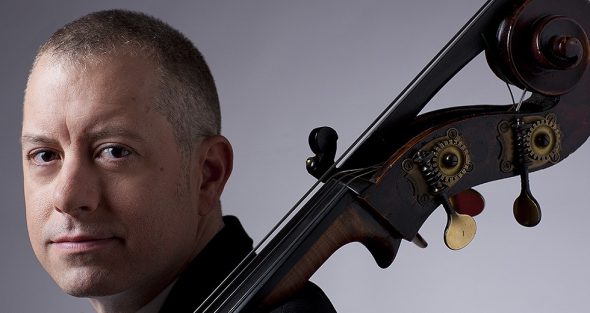 Rob Kassinger plays bass for the Chicago Symphony. He is professor of double bass at DePaul University in addition to being a guest instructor at Indiana University. Although deeply involved with chamber works for bass, Kassinger has also developed a reputation as a jazz player.

Evans found the reduction scores in a library in Australia. The transcriptions were written by Ignaz Lachner in the mid-19th century. The piano part is basically the same as the original, with the quartet representing the full orchestra. The addition of a bass player adds depth to the sound of the chamber strings. Evans and Boico carry the themes on violins. The three lower registers – viola, cello and bass – often provide a basso continuo-like platform. The pianist must play with a light touch as he is partnering with a smaller group.

Piano Concerto No. 24 has been considered to be the greatest of Mozart’s piano concertos. Large in scope and orchestration, the concerto begins in a minor key and finishes the same way. Most works of the time returned to a bright major key for an optimistic closing statement. Critic Steven Lowe has concluded: “This is the kind of dark and disturbing music that led early 19th century composers like Schumann and even young Brahms to view Mozart as one of their own — a Romantic.”

The FAQ will also play a mature Mozart string quartet, the String Quartet in D major, K.499, “The Hoffmeister” (1786). The work combines the divertimento-like quality of Mozart’s own early works with the serious tradition of the late Classic era quartet. Critic Melvin Berger observes that “Despite a determinedly optimistic outlook, the quartet conveys a sense of despondency beneath the surface glitter, which Mozart biographer Alfred Einstein described as ‘despairing under a mask of gaiety.’ We hear sections of light, cherry, Rococo music giving way to heavy and solemn passages of serious ‘learned’ writing.”

The concert will also include a late Dmitri Shostakovich quartet, String Quartet No.11, Op.122 (1966). Shostakovich had worked for four decades with the Beethoven Quartet, who premiered 13 of his quartets. When second violinist Vasily Shirinsky died, Shostakovich wrote a quartet in his memory.

Critic Paul Griffiths writing for the Chamber Music Society of Lincoln Center, identifies a shift in the style of Shostakovich quartets: “Many aspects of the Eleventh Quartet contribute to an atmosphere of remembrance, regret, and ultimately repose, and are continued in the quartets to come: sparse scoring, with long stretches maintained by only one or two of the players; gestures suggesting memorial chant or funeral march, or falling tears; unusually dissonant chords, and correspondingly weakened tonalities; broken phrases; passages close to inactivity.”

Shostakovich choose to break the quartet into seven distinct movements, although they are played in a continuous sequence within approximately 16 minutes. A slow introduction is followed by a mechanistic rhythmic scherzo which morphs into a highly dissonant recitative, a rapid bright etude and a humorous interlude. A longer elegiac adagio and a calm, mournful finale complete the work. I find the emotional arc of the quartet well served by the rapid changes of mood from movement to movement.

Three works with tragic dimensions seem appropriately chosen, for the Fine Arts Quartet appreciates the power of deeply moving music. Works by Mozart, in particular, have been cherished by the FAQ for the juxtaposition of beauty and sadness – evidenced by both works on this program.

The February 26 concert begins at 3:00 p.m. and will be preceded by a pre-talk at 2:00 p.m. Tickets may be purchased on-line at the Peck School of the Arts box office or at 414-229-4308. Tickets are a bargain $10 ($5 students). The Zelazo Center is located at 2419 E. Kenwood Blvd. Parking is available in the Zelazo Center lot, to the south of the building, and in the Union parking garage across Kenwood Boulevard. (Parking is no longer free on Sundays.)

The Fine Arts Quartet will offer their next concert in the series Sunday, April 30. Piano duo Fabio Witkowski and Gisele Nacif Witkowski will join the quartet. Individually they will participate in a Robert Schumann Piano Quartet and Piano Quintet. The duo will play a set of piano dues featuring Brazilian composers Heitor Villa-Lobos and Francisco Mignone as well as contemporary Spanish composer Antón García Abril.

One thought on “Classical: Mozart Piano Concerto Without Orchestra”