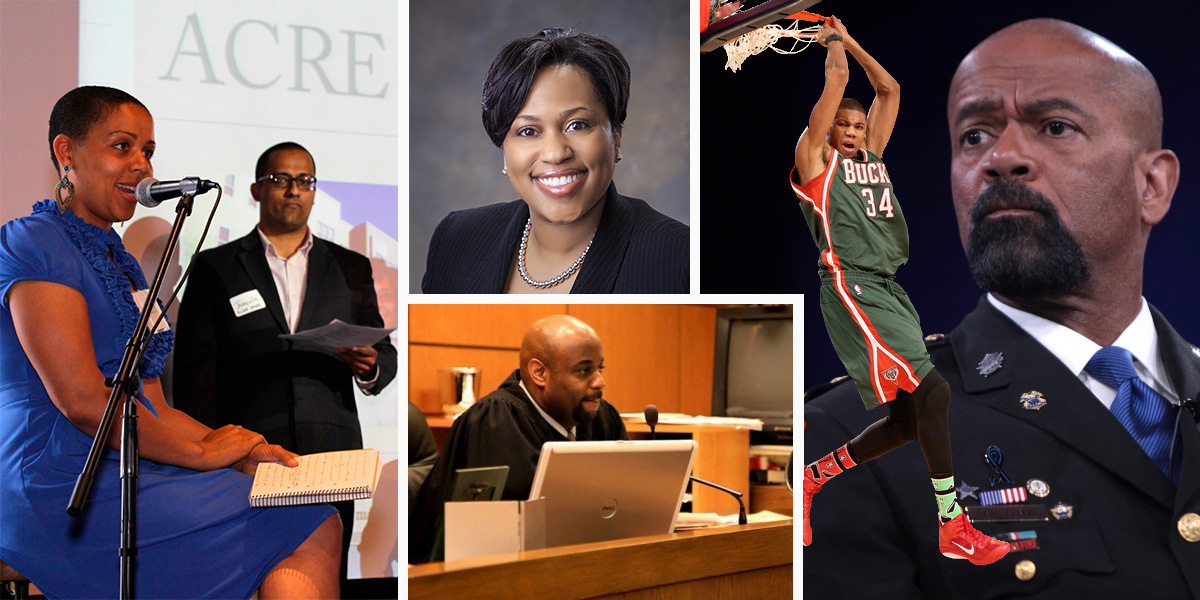 What better day than Valentine’s Day to dole out some love to a group of Milwaukeeans making an impact on the city? Some of the recipients are rising stars, like Giannis Antetokounmpo, and others are those in need of more love, like Milwaukee County Sheriff David Clarke, Meet five Milwaukeeans I’m deeming worthy of heart-shaped chocolates today.

The 22-year-old Greek Freak better be laying off the candy this Valentine’s Day, he’s got a big date this weekend. The Milwaukee Bucks star will be the first Bucks player to start in a NBA All-Star in my lifetime. The last Buck awarded the honor was Sidney Moncrief in 1986. That’s enough to make my list on its own, but Antetokounmpo also stands a decent chance of leading the Bucks back into the NBA playoffs this year. For that he earns some healthy Valentine’s candy, a personal favorite of his, a strawberry smoothie.

The NBA All Star game tips off Sunday night on TNT.

While Giannis Antetokounmpo might have the weight of an entire NBA franchise on his shoulders, Milwaukee Public Schools superintendent Dr. Darienne Driver is leading the future of 76,000 students and 158 schools. Driver faces an uphill battle to convince the Wisconsin Legislature that MPS, a district where 80 percent of the students are economically disadvantaged, is worthy of millions more from Governor Scott Walker‘s recently announced school funding increase. As part of a district-wide improvement plan, Driver has laid out a fairly aggressive vision to introduce school uniforms, synchronize all the school calendars, install a credit recovery “J-Term,” take over all school chartering authority, improve early literacy and more aggressively turnaround under-performing schools.

I’m sending the superintendent all the heart-shaped candy she needs to move the district forward.

Give the Milwaukee County Sheriff a hug next time you see him, he needs it. His behavior of late has been downright puzzling, even compared to his past statements.

He was involved in a bizarre confrontation on an airplane that ended with Riverwest resident Dan Black being detained at General Mitchell International Airport. Further compounding things, his office posted a highly inflammatory image online of Black that contained text stating “Cheer Up Snowflake… If Sheriff Clarke were to really harass you, you wouldn’t be around to whine about it.” This followed a statement earlier that week about “knocking out” Black and others like him. All this over a Dallas Cowboys jersey.

If you needed proof that pigs could fly, the official Milwaukee County Sheriff’s Office Facebook has now twice praised columns by Urban Milwaukee editor Bruce Murphy (not necessarily known for pro-Clarke stories) in the past month. One Murphy story Clarke liked had some critical words about the Milwaukee Journal Sentinel and the other was an expose on Charlie Sykes, with whom the Sheriff has had a huge falling out. (Didn’t I say the Sheriff needed some love?)

In a couple months we’ll learn this was all an audition for a job in the administration of President Donald Trump. Unless Clarke gets nothing. Then he’ll really need a hug.

Milwaukee’s most beloved municipal judge Derek Mosley has earned a Valentine’s Day treat this year. He’s spent much of the past year recovering from a kidney transplant. The donor was friend Joann Ering, who also happens to don a black robe and dispense justice. But it isn’t Mosley’s new kidney, nor his work in the courtroom that place him on this list. Mosley has earned his Valentine for his engagement with the community. Whether it’s volunteering at public schools, officiating what seems to be half the weddings in town, or posting 28 days worth of Black History Month facts on Facebook, the Chicago transplant is sharing his time with Milwaukee.

The Milwaukee version of the Six Degrees of Kevin Bacon parlor game is three degrees of separation from Derek Mosley. I bet you can’t find anyone in town somehow not connected to the judge.

It’s been said that real estate development is a boy’s club, a white one at that. And while that’s certainly true at a glance, developer Melissa Goins leads a generation of up-and-coming developers that are knocking down the clubhouse doors. Empowered by training in the ACRE program, a network of developers willing to partner on deals and a lot of sheer determination, Goins has steadily made a name for herself in the Milwaukee real estate scene. Her latest projects are the mixed-use redevelopment of the Mill Road Library branch of the Milwaukee Public Library and conversion of the former Garfield Elementary School into apartments.

2 thoughts on “Eyes on Milwaukee: My 5 Milwaukee Valentines”