Walker Will Crack Down On Welfare

Food stamps will be much harder to get. Democrats ask, will kids be affected?

Governor Walker delivers remarks at Wisconsin Manufacturers and Commerce’s Business Day in Madison, 2013. Photo from the State of Wisconsin.

This year, however, the political stars are aligned – with Republican Gov. Scott Walker, Republican majorities in both houses of the Legislature, and Republican control of the White House and Congress – for the most significant reforms in more than 20 years.

Although exactly what changes Walker wants won’t be known until he introduces his 2017-19 budget on Feb. 8, his aides promised a broad package of changes.

It “will increase investment in job and skills training for the employed and unemployed, reduce barriers to work and increased earnings, and expand programs that incentivize employment. Where flexibility is needed, it will also aggressively seek [Trump Administration] waivers to encourage work and enhance self-sufficiency [and] pilot work requirements for working-age, able-bodied adults receiving housing vouchers.”

Let’s make sure “work is dignifying and connects individuals to society and its values,” Walker said. Public aid should be a “trampoline – not a hammock,” he added in his State of the State speech. 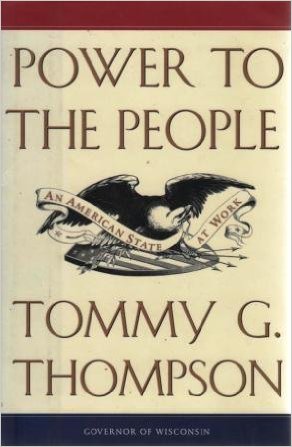 Power to the People

Wisconsin has historically been a petri dish for welfare reform. Consider how four-term Republican Gov. Tommy Thompson — who traveled Wisconsin with Walker last week to endorse the new changes – justified his 1994 reforms, Wisconsin Works or W2. Walker is calling his changes Wisconsin Works for Everyone.

In his book, Power to the People, Thompson said he gave these marching orders:

“I wanted a program built around work. I wanted to end the cash benefit premise of welfare and replace it with a real-world concept: pay for performance. Everyone would have to work, and only work would pay. I described it as a new contract… Government would agree to provide child care, health care, and other assistance for a limited time to help people find and keep a job.

“In return, people must be willing to take personal responsibility for themselves and their families. They have to get up in the morning, get the kids fed and off to school or day care, and get themselves to a job – just like ordinary, hard-working Americans.”

Here’s a 2017 example of that, Walker said: An able-bodied adult with one or more children over age 6 should be required to work 80 hours per month, or be enrolled in job-training programs, to qualify for food stamps. Children in those families would not lose food stamps, however.

With some exceptions, healthy adults between ages 18 and 50 without minor children have a work or job training requirement to get food stamps.

But Thompson also offered a welfare-reform warning to Walker and Republicans who control the Legislature: It costs “more money up front. We invested more money in child care, health care, transportation and caseworkers who would work with people one-on-one.”

Democratic legislators from Milwaukee fought Thompson’s welfare reforms then, and are again. This generation of Milwaukee Democrats have much less Capitol clout.

“May I ask, how are you going to be able to only penalize the adult – and not the child?” Democratic Sen. Lena Taylor asked in a Milwaukee Journal Sentinel story, referring to new food stamps criteria.

Added Milwaukee Democratic Sen. LaTonya Johnson: “We must treat people with dignity and respect and provide them with real opportunities if we actually want to improve crisis-level poverty in Wisconsin.”

Beyond the political rhetoric, how many Wisconsin residents would have their lives reshaped by welfare reform?

The fine-print details of Walker’s proposals won’t be known for weeks. But the state Department of Health Services reported that 352,148 households – or “assistance groups,” in bureaucrat-speak – received food stamps in December. That’s about one out of every six households statewide.

Other questions legislators will ask about Walker’s welfare changes:

*How many of these households now have one or more working adults?

*Of them, how many households already have an adult who meets new criteria of working at least 80 hours per month, or getting job training?

*How many people now exempt from the work requirement would continue to be exempt for other reasons – chronic homelessness or mental health problems, for example.

Why threaten to end recipients’ benefits? “People move faster when you require them to do something, either training or work,” as Thompson wrote.

3 thoughts on “The State of Politics: Walker Will Crack Down On Welfare”