By Gretchen Schuldt, Wisconsin Justice Initiative - Jan 25th, 2017 12:12 pm
Get a daily rundown of the top stories on Urban Milwaukee

Below are excerpts from the ACLU’s lawsuit against the state against Department of Corrections officials alleging shocking treatment of juveniles at the Lincoln Hills and Copper Lake juvenile prisons. The allegations are deeply, deeply disturbing. The state has not yet responded to them.

Currently, Wisconsin’s juvenile corrections officials lock up approximately 15 to 20% percent or more of the facilities’ young residents in solitary confinement cells for 22 or 23 hours per day. Many of these children are forced to spend their only free hour of time per day outside of a solitary confinement cell in handcuffs and chained to a table. Officers also repeatedly and excessively use Bear Mace and other pepper sprays against the youth, causing them excruciating pain and impairing their breathing. …

Many of these children are forced to spend their only free hour of time per day outside of a solitary confinement cell in handcuffs and chained to a table. 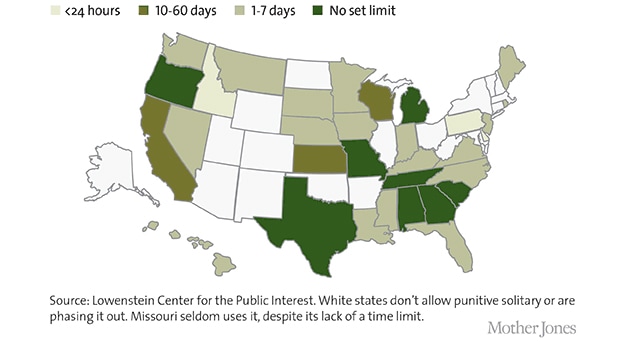 Source: Lowenstein Center for the Public Interest. White state don’t allow punitive solitary or are phasing it out. Missouri seldom uses it, despite its lack of a time limit.

For another look at juvenile solitary confinement, see “This is What Happens When We Lock Children in Solitary Confinement” in the January / February issue of Mother Jones magazine.

A cell in the segregation units is approximately seven by ten feet. The cell is entered through a large metal door which swings out. The door has a small glass window about nose height and one or two slots through which food trays are passed. Youth extend their forearms through the door slot before and after being placed in the cell so that the guards may lock or unlock the handcuffs they must wear when they are out of their cells. The single window to the outside is covered with bars. …

A light in the segregation cell stays lit 24 hours per day.

Defendants often sentence youth to solitary confinement even for infractions that do not pose a serious threat to safety, such as disrespecting staff, refusing to lock into a cell, or
running.” …

Defendants often sentence youth to solitary confinement for periods of 30 or 60 days for a variety of offenses—especially when youth have been disciplined previously, or for fighting regardless of whether the altercation was likely to or did result in injury. Even when youth are charged with relatively minor rule infractions, they often spend up to 14 days in segregation while they await the issuance of a conduct report and a hearing, and then frequently get a few additional days from the hearing examiner as punishment.

The segregation cells are dirty and smell like sweat and urine.

Boys receive only a small amount of toilet paper and must request more when they need it. Boys also may not flush their toilets themselves, but must ask the guards to turn the toilet on to allow them to flush it. Because the girls’ solitary cells do not have a sink or toilet, the girls must push a call button and ask guards to be escorted to the bathroom. Guards sometimes take a long time to respond to requests to use the bathroom.

The girls must push a call button and ask guards to be escorted to the bathroom. Guards sometimes take a long time to respond to requests to use the bathroom.

In solitary confinement, Defendants’ pattern and practice is to reduce this educational programming to a single hour outside the cell with a teacher who comes to the segregation unit and meets with about three youth at a time. During this time, they may be locked to a desk in the classroom.

In solitary confinement, Defendants’ … reduce this educational programming to a single hour outside the cell … During this time, (youth) may be locked to a desk in the classroom.

In addition, when Defendants put youth into segregation, they revoke access to the very programs which might help and rehabilitate the youth, such as Aggression Replacement Training (ART) and the Juvenile Cognitive Intervention Program (Phases I and II). If a youth misses more than a few sessions of any such program because he or she is in solitary confinement, Defendants require the youth to start the program over from the beginning.

Defendants require the youth to start the program over from the beginning.

The National Commission on Correctional Health Care (“NCCHC”), for example, issued a statement establishing that juveniles should not be placed in solitary confinement for any duration …

… juveniles should not be placed in solitary confinement for any duration …

…no juvenile should be placed in room confinement for more than twenty-four hours.