The Rise of Right-Wing Propaganda

Shortly after the start of the new year, the Journal Sentinel published an op ed attempting to prove that, in the words of its title, “Obama has been a disaster.” The column by Justin Haskins, executive editor of The Heartland Institute, described as “a think-tank devoted to free enterprise,” is worth examining, not because its arguments are particularly cogent or unique. Rather it does an excellent job of demonstrating the depths to which some conservative institutions have sunk.

Early in the column, the following paragraph appears:

After nearly eight years in office, though, Obama has failed to deliver on many of his campaign promises and has left America worse-off than it was when he entered the White House.

This extraordinary claim depends on the reader’s amnesia about what was happening when President Barack Obama entered office in January 2009. The American economy—and much of the world’s–was in free fall. Jobs were being shed at a rapid rate. Credit was locked up.

In April 2009, two economists, Barry Eichengreen of UC-Berkeley and Kevin O’Rourke of Oxford, published a paper comparing the global financial crisis to the Great Depression. The paper, entitled “A Tale of Two Depressions,” warned that, when viewed globally, the economy was worse than at a similar stage of the Great Depression: “the decline in industrial production in the last nine months has been at least as severe as in the nine months following the 1929 peak.” 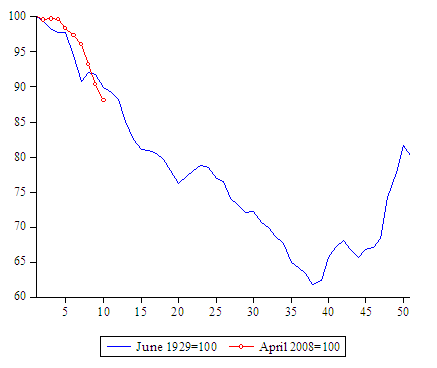 The next graph compares the behavior of the global stock market. Once again the blue line is for the Great Depression, and you can see the stock market actually rose above its beginning point (100) but ten months into the depression (again the months are numbered on the bottom line) the market had dropped to about 90 percent of its beginning point. By contrast, the Great Recession (the red line) had dropped to about 50 percent of its value in just 10 months. 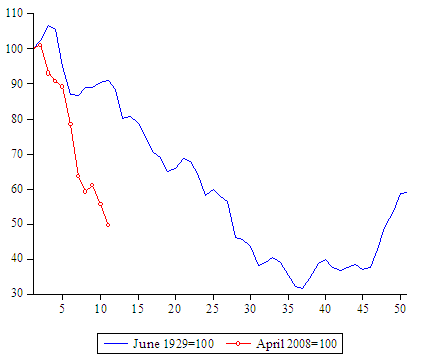 Finally there was world trade. In the author’s words, this was “another area where we are ‘surpassing’ our forbearers is in destroying trade.” World trade was down to about 83 percent of its peak value (100) by early 2009 compared to about 95 percent of the peak 10 months into the Great Depression. In all three cases the Great Recession had more horrible numbers, which Obama inherited, than those of the Great Depression.

Whatever one thinks about the recovery under Obama, to claim that things are worse today than in January 2009 depends on willful forgetfulness on both the author’s and reader’s part as to the situation in early 2009. The claim that “America is worse off” than when Obama entered office has to be classified as “Pants on Fire,” to adopt the PolitiFact terminology, or “Four Pinocchios,” in the language of the Washington Post’s Fact Checker.

To buttress his claim that America is worse off, Haskins argues that jobs have lagged population growth:

Since January 2008, the U.S. population has grown by more than 20 million but the number of jobs has increased by less than 7 million, meaning despite Obama’s boasting about alleged job growth, the number of jobs created has failed to keep up with population growth, normally considered a poor economic indicator.

The next chart shows job growth using two different starting points. The first, in green, starts January 2008, a year before Obama took office, which was the pre-recession peak. The second, in orange, measures growth from January 2009, Obama’s first first month. 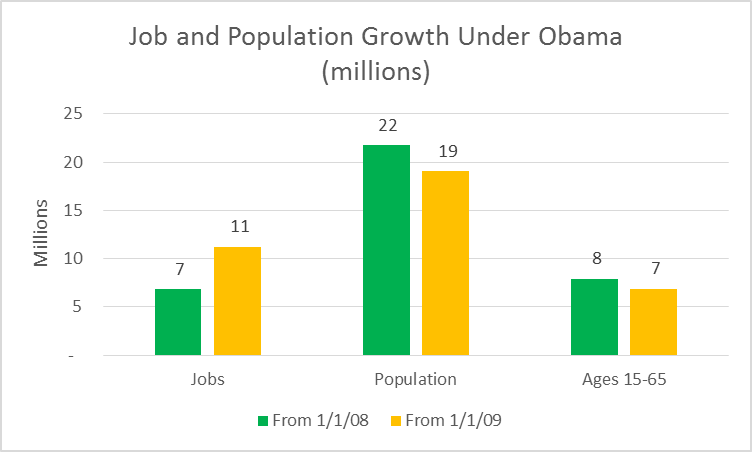 While job growth has lagged total population growth, demographic changes account for much of this.  The oldest baby boomers are now in their seventies. This is reflected in the right-hand column, showing growth in the population who are of working age, between age 15 and 65, which grew by only seven or eight million, depending on one’s starting point. Thus, when the working age population is considered we are now slightly behind the pre-recession peak and slightly ahead of when Obama took office. By considering the entire population, including millions of retired baby boomers, Haskins presents a picture of a huge jobs gap that doesn’t exist.

The Great Recession had a devastating effect on jobs. As the next chart shows, jobs peaked at 138 million in early 2008. They declined to 134 million when Obama took office in January 2009, and continued declining for another year to just under 130 million. Since then jobs have steadily, if slowly, grown, hitting 145 million last November. That’s a huge turnaround. 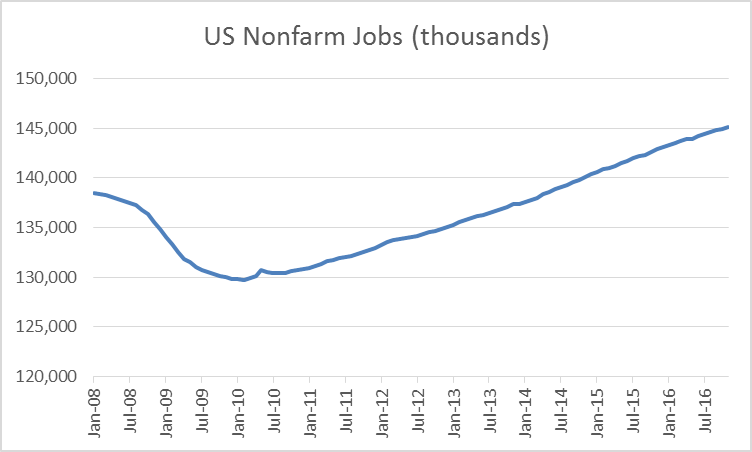 Even after the number of jobs started growing, pay continued to decline. Recently, average pay in real terms has grown until, in real dollar terms, it exceeds the previous peak.

Finally, the growth of jobs has brought down the unemployment rate to the third lowest value since the 1970s, as shown in the chart below (the green bars show recessions). True, one might question how much of a decline may be due to discouraged workers dropping out of the labor force as compared to people getting jobs. However, to assert that US unemployment is worse is a willful attempt to mislead. 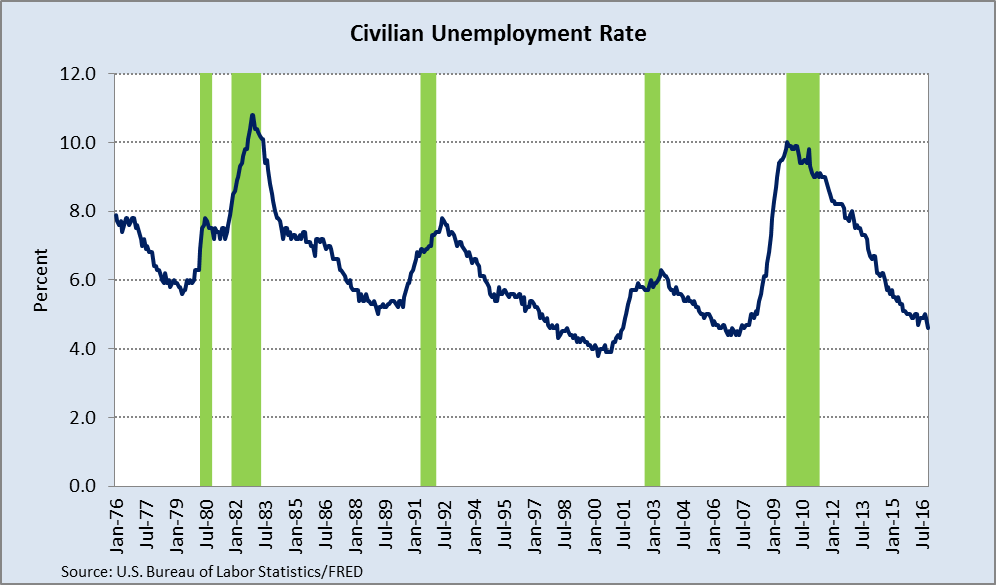 Haskins runs through a variety of issues. Beyond a simple assertion that Obama is to blame, he offers little or no analysis or evidence. These claims include:

He concludes by claiming, “Happily, Republican opposition has been able to keep the president at least partially grounded.” The possibility that this opposition may have contributed to some of the ills he listed, notably the slowness of the recovery, doesn’t seem to have crossed Haskins’ mind.

In recent years, the Journal Sentinel, along with many of its peers, fact-checks statements from politicians and other public officials. The Haskins article points out the need to fact check articles that appear on its editorial page as well.

The newspaper’s desire to offer a variety of viewpoints is admirable. However, printing as “facts” claims not tied to evidence does its readers a disservice.

A good start would be to require authors of opinion pieces to link factual assertions to the sources of the data used. This would allow the reader to easily check their claims. Are the claims backed up? Does they leave out important contextual information?

The practice of printing propaganda disguised as analysis is also doing a disservice to conservatives. Underlying the publishing of conservative-oriented material that includes false information is an implicit assumption: that this is the best conservatives can do. By doing so, the paper propagates an unspoken libel on conservatives: that there is no such thing as an honest and thoughtful conservative.

Two examples of organization that offer thoughtful analysis from a conservative orientation are the Niskanen Center and the American Conservative. Both have something interesting to say, but have been crowded out by the more propagandistic conservative think-tanks and foundations.

The Niskanen Center offers interesting perspective on a variety of issues from a libertarian perspective. (Niskanen chaired the Cato Foundation). Recent examples of articles I found provocative were one on climate change and the carbon tax and another examining the pros and cons of a universal basic income.

On its urbanism page the American Conservative offers a number of thoughtful articles, that contradict the usually accurate generalization that conservatives love sprawl.

Both are examples that help demonstrate that evidence-based conservatism is not an oxymoron. Doing so, however, requires a willingness to examine all evidence for and against a position. Far more common—and the Heartland column is a prime example—is to treat evidence as a weapon and include only the evidence that supports a pre-determined opinion.

Unfortunately, when facts are treated as opinions and opinions as facts, it becomes very hard to develop any sort of consensus on how to solve problems.

Correction: The original version of this story mistakenly compared population and job growth by using two different time periods and wrongly questioned Justin Haskins’ data in those two categories. We apologize for the errors.

13 thoughts on “Data Wonk: The Rise of Right-Wing Propaganda”