State’s scrubbing of all climate change info could be a model for Trump administration.

James Rowen, a longtime Wisconsin journalist and environmental blogger, recently discovered a stark remaking of a state Department of Natural Resources webpage on climate change and the Great Lakes.

Until December, the page, dating from the Democratic administration of former Gov. James Doyle, had this headline 2014 “Climate Change and Wisconsin’s Great Lakes” 2014 and a clear description of the state of the science, including this line reflecting the latest federal and international research assessments: “Earth’s climate is changing. Human activities that increase heat-trapping (“green house”) gases are the main cause.”

The page described a variety of possible impacts on the lakes and concluded, “The good news is that we can all work to slow climate change and lessen its effects.” Nine hyperlinks led readers to other resources.

While the web address still includes /greatlakes/climatechange, the page, managed under agency appointees of Republican Gov. Scott Walker, now has this headline: “The Great Lakes and a changing world.” It now says this:

As it has done throughout the centuries, the earth is going through a change. The reasons for this change at this particular time in the earth’s long history are being debated and researched by academic entities outside the Wisconsin Department of Natural Resources. The effects of such a change are also being debated but whatever the causes and effects, the DNR’s responsibility is to manage our state’s natural resources through whatever event presents itself.

There are now just two hyperlinks, one of which goes to a University of Wisconsin website about the environment and climate in the Yahara River watershed, which is not even connected to the Great Lakes. The other goes to the main page of the Center for Climatic Research at the University of Wisconsin. One has to poke around a while to get back to the issue at hand 2014 the impact of global warming on the Great Lakes.

James Dick, a spokesman for the Department of Natural Resources, sent a response explaining the changes on the webpage, asserting that the page “does not say the cause and effects of the change in climate are debatable.”

“It says they are being debated. There’s a difference,” Dick said. “Many scientists may be in agreement but this topic is still the subject of much debate and discussion among the general public.” 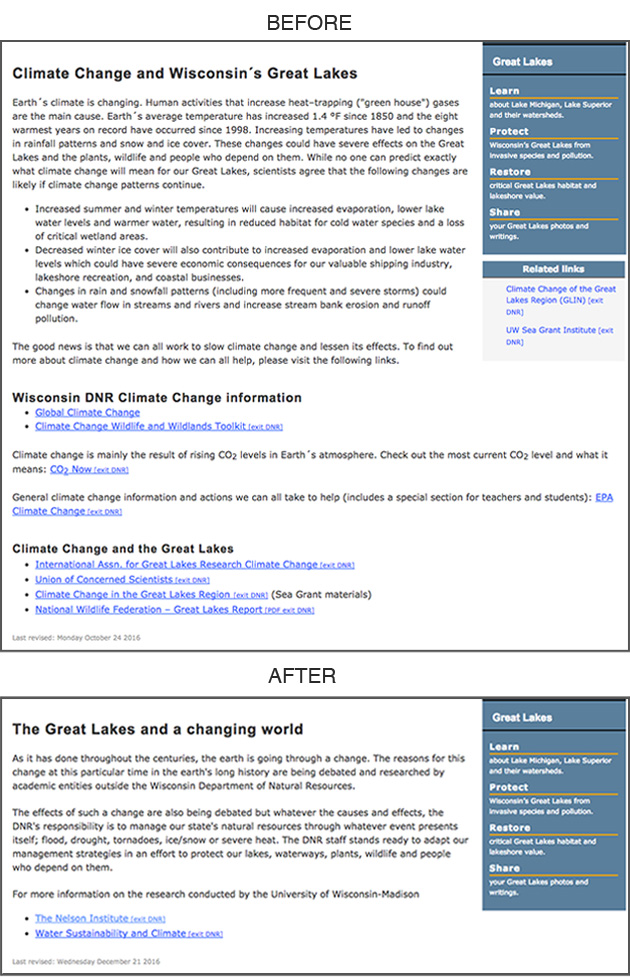 This webpage, managed by Wisconsin’s Department of Natural Resources, describes the impact of climate on the Great Lakes. Between oct. 30, 2016 (top), and Jan. 4 2017, it was changed to reflect that the effects of climate change are “being debated.” (Jillian Kumagai for ProPublica)

Under President Obama, websites highlight points that supported his carbon-cutting plans, while findings that might point to different policies tended to stay deep in the body of reports.

One example is the treatment of hurricanes in the 2014 National Climate Assessment. The prominent text blurb of the report home page is, “The intensity, frequency, and duration of North Atlantic hurricanes, as well as the frequency of the strongest hurricanes, have all increased since the early 1980s. Hurricane intensity and rainfall are projected to increase as the climate continues to warm.”

Buried in the report, there’s this line, which seems to qualify the actual threats previously highlighted: “[F]ewer storms have been observed to strike land during warmer years even though overall activity is higher than average, which may help to explain the lack of any clear trend in landfall frequency along the U.S. eastern and Gulf coasts.”

And so it’s entirely likely that the recent web revisions in Wisconsin portend what’s to come in Washington, given how Walker’s approach to climate change and industry resonates with that of many people in President-elect Donald Trump‘s circle of advisers.

In a phone interview, the Wisconsin blogger Rowen said he certainly suspects that his state’s experience is a troubling template for what could happen now at the federal level. “If you have one-party control over all units of government and that party has a pro-corporate, anti-environment mindset, everything will be coordinated, whether in law, executive action or judicial review,” he said.

Parties on all sides of the climate policy debate are now watching closely to see what happens to a vast array of webpages on climate change created during the Obama administration as Trump’s fossil-fuel friendly Cabinet choices and environmental team get to work.

Early signs, including a 74-question survey sent to Department of Energy employees (which the Trump transition team quickly disavowed as unsanctioned), had environmentalists and scientists deeply worried.

Some scurried to set up independent archives for potentially vulnerable climate data, with a repository established by the Technoscience Research Unit at the University of Toronto.

With Republicans in control in most states, and with the incoming White House and Congress committed to undoing President Obama’s climate policies, the “uncertainty” theme around climate change appears likely to become popular.

To be sure, enduring uncertainty does surround many of the most consequential aspects of global warming, like the speed of sea-level rise and extent of warming in this century. But for decades risk experts and economists with a varied range of political views have agreed that uncertain, but momentous outcomes are the reason to act 2014 not a reason to delay.

And the data continue to accrue, with 2016 now set to be the warmest on Earth since at least 1880, when thorough temperature record keeping began, and a new study finding that, if anything, warming has been underestimated in recent years because of imperfect analysis of ocean data gathered by ships and buoys.

Lately, the wider climate-skeptic chorus has been dominated by Walker-style references to uncertainty or complexity in climate science, crystallized by phrases like “I’m not a scientist” and “the climate has always changed.”

When we wrote to Wisconsin officials seeking an explanation for the changes on the website, Dick, the natural resources department spokesman, sent the following email:

As we do from time to time with other website pages, we updated a webpage that had not been updated in several years. The update reflects our position on this topic which we have communicated for years 2014 that our agency regularly must respond to a variety of environmental and human stressors from drought, flooding, and wind events to changing demographics.

Our agency must be ready to respond to each of these challenges using the best science available to us. That is our role in this issue. Adaptation has been our position on this topic for some time. The recent update to one single webpage on our website was intended to reflect this perspective and approach to the topic.

The updated page does not deny climate is changing and it does not challenge the dedicated work of the scientists who are working on this issue. In fact, this updated page links to U.W.-Madison programs that include climate change in their research. It also does not say the cause and effects of the change in climate are debatable. It says they are being debated. There’s a difference. Many scientists may be in agreement but this topic is still the subject of much debate and discussion among the general public.

The last line raises a question about the role of government in helping explain to the public what many scientists agree on.

One thing that seems true is that so much information has accrued around climate change science and what it means for policy in recent years that partisans seeking to purge government websites have their work cut out for them.

If you search the Wisconsin Department of Natural Resources website, for instance, for the phrase “climate change” there are still some hits, including an educational resource for kids titled, “Global Warming is Hot Stuff!”

There’s still an article posted from the February 2011, issue of the magazine of the natural resources department, in which Jack Sullivan, then the director of the agency’s Bureau of Science Services, said, “We need to think about what climate change means for our natural resources and get out ahead of this problem, and we’re working hard to do that.”

Sullivan, however, retired in 2015, when the agency’s science budget was deeply cut under Walker and a Republican-dominated Legislature.

ProPublica is a Pulitzer Prize-winning investigative newsroom. Sign up for their newsletter.