Can Milwaukee learn lessons from them on how to fund its parks? 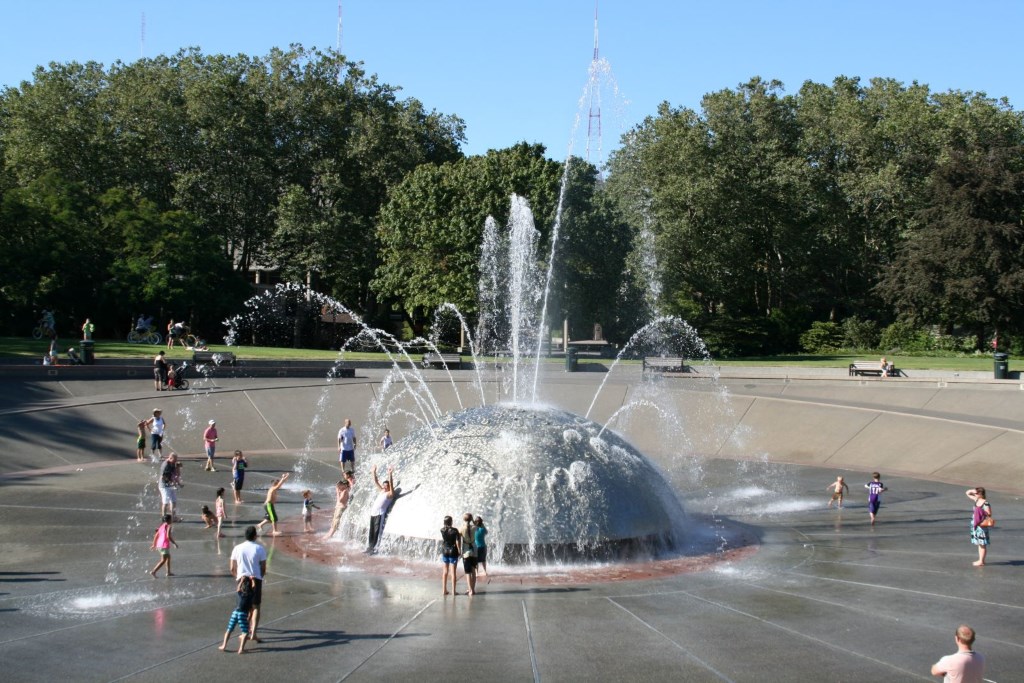 The International Fountain at the Seattle Center (home of the Space Needle) functions as a de-facto public pool Photo by Jeramey Jannene.

Milwaukee County’s park system has been declining for decades. Operating and capital budgets have been continually slashed. Deferred maintenance totals hundreds of millions. The signs of decline are visible in many parks. To remain livable and competitive, Milwaukee County needs to find more ways to fund its parks.

Five other cities have found solutions to this problem: Boston, Chicago, Madison, Minneapolis and Seattle. Each successfully manages parks for exceptional quality of life. All are leaders in what urban-design expert Jan Gehl calls a “renaissance in public spaces.”

Information was gathered first-hand and from published data. The Trust for Public Land’s annual “ParkScore Index” ranks the 100 most-populous U.S. cities, based on comparable metrics.

For purposes of comparison to the five cities below, Milwaukee’s 2016 ParkScore ranking is #27 of 100 cities; total public investment in parks is $89 per capita; parks as percentage of city land is 8.7 percent. Milwaukee County Parks are primarily funded through non-dedicated tax-levy allocations and “earned income” from fees and concessions. Sponsorships and grants supplement the budget. Donations for park projects are processed by The Park People of Milwaukee County, a nonprofit friends-groups umbrella organization. 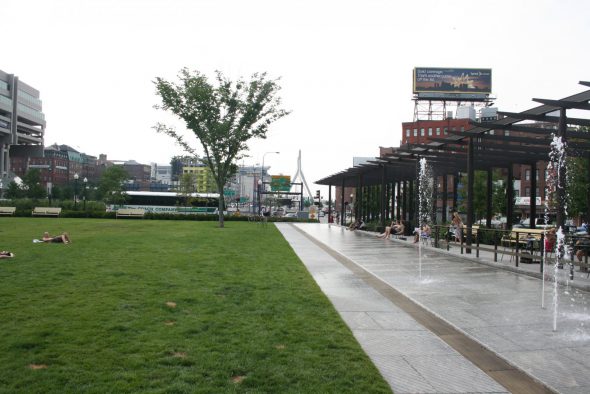 Founded in 1970, Friends of the Public Garden has 2,500 members and does stewardship and advocacy for Boston’s first public parks–Boston Common, Public Garden, and Commonwealth Avenue Mall. The group hired its first paid executive director in 2006 and has “continued to be a strong voice in protecting these parks against encroachment” and overuse. The group advocated for a 1990 law that protects Boston’s historic parks from shadows cast by tall buildings.

By the 1990s, Olmsted’s Emerald Necklace parks had declined until a park commissioner garnered support for their restoration, including the removal of destructive invasive grasses. Founded in 1998, the Emerald Necklace Conservancy works to “maintain, restore and protect” 1,200 acres of parks in concert with three public partners. The nonprofit stewardship organization has a $1.9-million budget, 10 full-time staff and an “ever-expanding cadre of volunteers.” 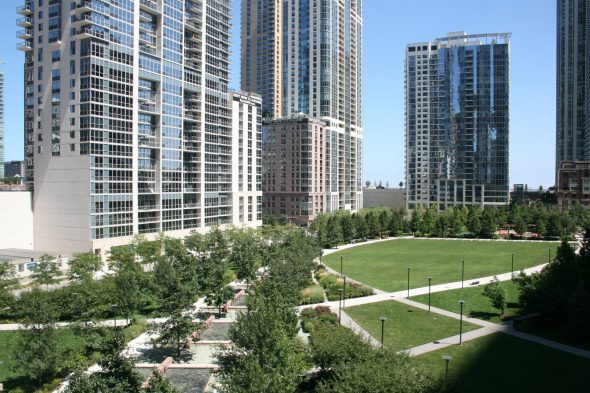 “The City in a Garden” has been Chicago’s motto since the 1830s. In 1934, the Chicago Park District consolidated 22 districts to “streamline operations.” A seven-member board appointed by the mayor governs the autonomous agency. Continually acquiring land, the District recently added 800 acres. Millennium Park offers year-round free programming and is a model urban park driving economic prosperity.

About two-thirds of District funding is from dedicated property taxes. Other revenues come from golf and harbor fees, and Soldier Field stadium, which it owns and operates. Income from concerts and other special events supports neighborhood parks.

Founded in 1975, Friends of the Parks works to “preserve, protect, improve and promote” parks and open space. They conduct programmatic, educational, and advocacy efforts supported by members, donors, volunteers and partnerships with environmental, governmental and corporate organizations. Established in 2012, the Chicago Parks Foundation “provides grant management…and supports community groups who wish to fund raise for park-specific projects or programs.”

The Grant Park Conservancy enhances Chicago’s 319-acre “front yard” (which includes Millennium and adjacent Maggie Daley parks) by raising “private-sector dollars to match public funding,” to “make it a truly lively civic space.” The Garfield Park Conservatory Alliance describes the 1908 conservatory as “one of the largest and most stunning” glasshouses nationwide and reports raising “millions for educational programming, community relations, and visitor services.” 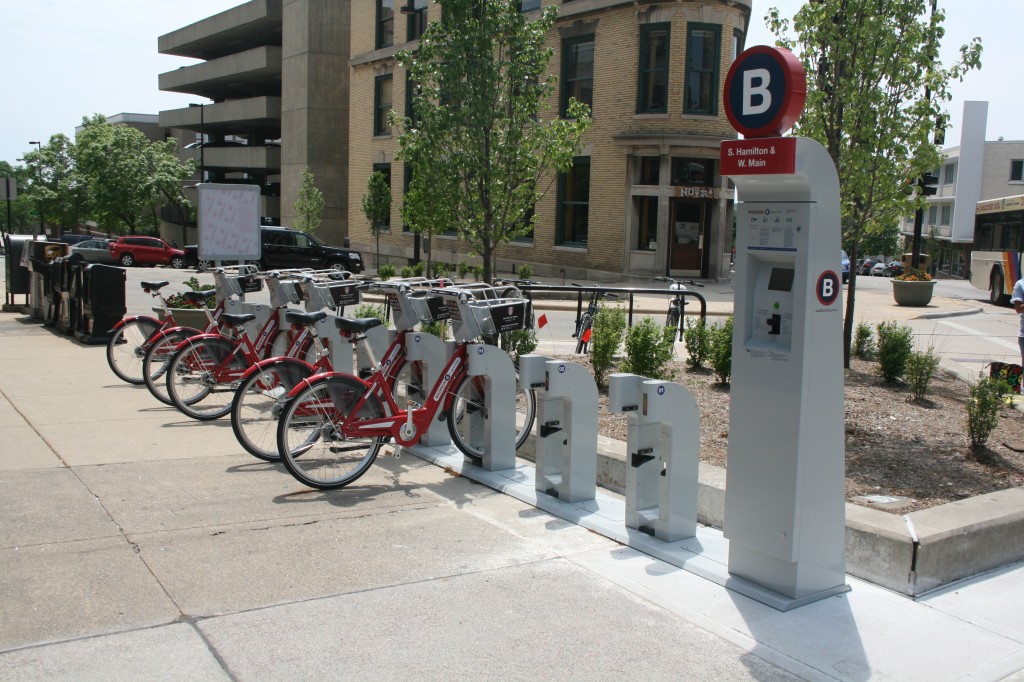 A B-cycle station in Madison just off the Capitol Square. Photo by Jeramey Jannene.

NerdWallet named Madison “the greenest city in the U.S.” in 2014. Wisconsin’s capital has continually increased parkland, adding 362 new acres since 2006. Olbrich Botanical Garden opened in 1978 and its tropical Belz Conservatory in 1989. Greater Madison boasts more than 200 miles of biking and hiking trails.

Mayor Paul Soglin has long advocated for all types of citywide parks during 19 years in that office, intermittently, since 1973. The Board of Park Commissioners (five appointed citizens and two alderpersons) governs Madison’s Parks Division. Staff and appointed volunteers develop Madison’s Park and Open Space Plan, informed by “field-validated observation of park users in a sample selection of parks” and extensive outreach “to gather input on recreation preferences.” Following public hearings, the plan is adopted by the Parks Board and Madison’s Common Council and “updated every five years to stay current with changing recreational trends, demographics, and park needs.” 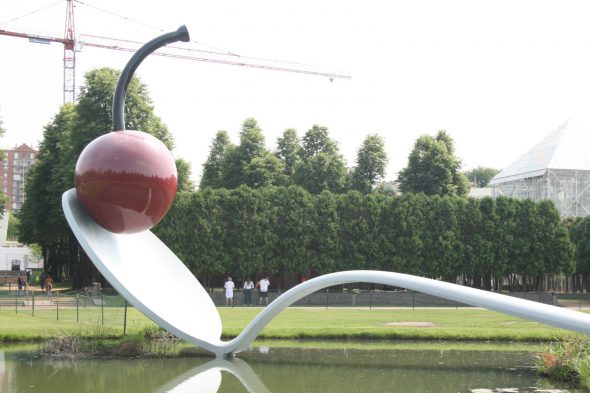 Spoonbridge and Cherry at the Walker Art Center in Minneapolis. Photo by Jeramey Jannene.

In 1883, Minneapolis citizens voted to create a Board of Park Commissioners, which is credited with building and consistently maintaining this model park system. Renowned landscape architect Horace Cleveland designed the system, which features many natural lakes and the “Grand Rounds” network of scenic byways.

The Minneapolis Park and Recreation Board, an independent, semi-autonomous body, has nine elected commissioners who are part-time employees. The MPRB manages a dedicated tax levy, developer impact fees, and a Tree Preservation and Reforestation Levy to address losses from emerald ash borer and storms. Large “regional parks” get funding from the Metropolitan Council, Minnesota’s Parks and Trails Fund, the Minnesota Lottery and a 3/8-cent sales tax, in addition to local and federal funding.

This year, the MPRB and City Council jointly adopted a “landmark initiative” to ensure that at least $11 million in capital funding will be designated annually for Minneapolis’s 160 “neighborhood parks.” It will reverse chronic underfunding of these smaller parks. The trail-blazing, criteria-based system assesses conditions and service levels while also considering racial and economic equity.

The website notes that the Minneapolis Parks Foundation, an independent, donor-supported nonprofit, “brings visionary leadership, philanthropic investment and private-sector expertise to support innovation and equity throughout the Minneapolis park system.” Five-full-time staffers work closely with the MPRB, including on the RiverFirst Initiative, an ambitious long-term re-imagining of the Upper Mississippi Riverfront. 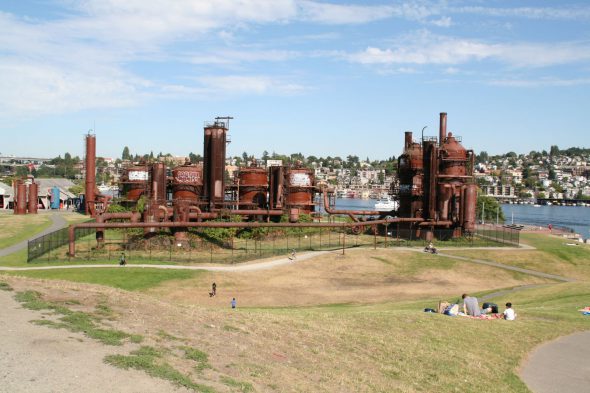 Beginning in 1903, the Olmsted Brothers firm spent 34 years creating Seattle parks. John Charles Olmsted, a key colleague of his stepfather Frederick Law Olmsted since 1875, was lead designer for 37 parks and playgrounds and linking boulevards. A history by Friends of Seattle’s Olmsted Parks notes, “Park planners across the country recognize Seattle’s Olmsted park system as one of the best preserved and best designed” in the U.S., making Seattle “one of the most livable spots in the country.”

In 2014, voters approved creation of the Seattle Park District, an independent entity with taxing authority and governed by the Seattle City Council as the District’s board. A community board, the District Oversight Committee, advises the mayor, City Council, and parks superintendent about parks issues. 2016 capital funding came from the District, various city funds, a federal Community Development Block Grant, the Central Waterfront Improvement Fund and King County.

With five full-time and three part-time staff, and a $900,000 operating budget, the Seattle Parks Foundation manages 57 active projects and millions annually in restricted gifts. It “supports community-led public space initiatives, working with volunteers, donors, and community and public-sector leaders to build and sustain…thriving and connected public spaces…that improve the health and happiness of all Seattle residents.” Development director Erin Miller said that “strong advocacy efforts and partnerships are key” to the foundation’s success. 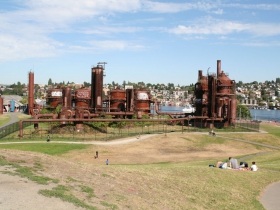 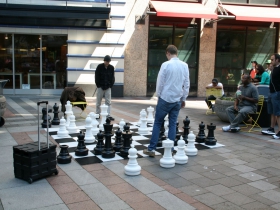 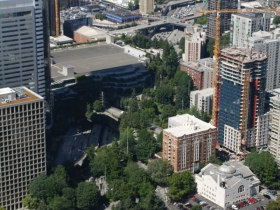 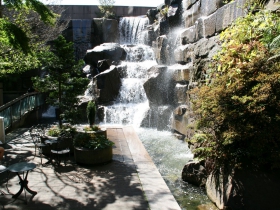 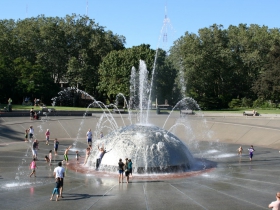 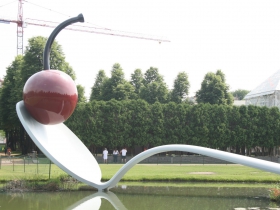 A version of this story first appeared in the nonprofit Preserve Our Parks’ newsletter.