By Gretchen Schuldt, Wisconsin Justice Initiative - Dec 21st, 2016 11:47 am
Get a daily rundown of the top stories on Urban Milwaukee

Data from the three individual Municipal Court branches that participated in “Warrant Withdrawal Wednesdays” will not be publicly released, according to Milwaukee County Circuit Judge Maxine White.

“We did this for reasons that cannot be measured on paper,” she said. 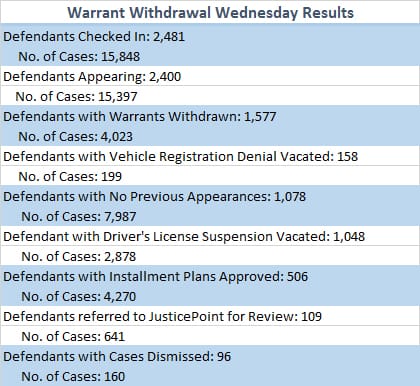 White, the county’s chief judge, made her comments during a meeting last week of the Community Justice Council, which includes representatives of Milwaukee-area criminal justice agencies and local governments who work to improve the justice system. While White is not generally involved in the day-to-day activities of Milwaukee Municipal Court, she has some oversight functions as chief judge. She is not, however, the Municipal Court records custodian, so her authority to withhold the records is not clear.

“I don’t understand the justification for refusing flat out to release information,” said Brian Michel, the lawyer who asked that the data be released by branch. Compiling such data should not be a big deal, the Legal Aid Society attorney said in an interview. (Michel has also announced as a candidate for Municipal Court judge running against incumbent Judge Valarie Hill.)

The cases are “still tracked by branch,” he said. White’s flat assertion that they would not be made public is a “concern,” he said.

Both Michel and Ald. Nik Kovac, who attended the meeting, praised the effort behind the program.

“I am glad the Municipal Court is proactively trying to reach the thousands of Milwaukee residents with active warrants,” Kovac said later. “The fact that over 1,000 of the 2,400 total citizens who showed up for Warrant Withdrawal Wednesday had previously not appeared in court speaks to the effectiveness of the social media outreach.”

The court used Facebook to spread the word about the Wednesdays.

Kovac said he had concerns, however.

“The fact that only 100 of those 2,400 appearances — less than five percent — were referred to JusticePoint indicates that even on such a day the court is not adequately addressing the poverty rates in our community — which are certainly higher than five percent,’ he said.

JusticePoint is an agency that evaluates defendants to determine their ability to pay and potential need for mental health or AODA services. Judge Hill said all of those referred to JusticePoint were found to qualify for an alternative sentence, but not everyone elected the community service option because of the difficulties in accruing enough hours to pay off their forfeitures.

Indigent Municipal Court defendants are entitled, under law, to sentencing alternatives, such as community service, rather than the usual forfeitures. The city’s Municipal Court judges, however, often do not fully inform defendants of their rights, as they are required to do under state law.

“It does us no good as a city to expect those who can’t pay to pay,” Kovac said. “And there are options other than money for our citizens who can’t pay with cash to still pay their debt to society. Hopefully, in the future our Municipal Court will embrace and champion such community service options for the poor in our city.”

Presiding Municipal Court Judge Chavez said during the meeting that he does inform defendants of their rights, not just always when proceedings are recorded.

Chavez said cases must be tracked from beginning to end to determine when and if defendants are informed of their rights. State law, however, is quite specific about how and when judges must deliver the message — orally and in writing, at the time that the judgment (verdict) is rendered.

Kovac said he was “distressed” by Chavez’s comments.

“His response was not, ‘Yes, I always follow the statute and inform people of their rights.’ It was ‘You can’t prove I don’t because not all of my contacts are recorded.’ That response from a (presiding) judge should be concerning to us all. Hopefully all three judges in the future will explicitly and publicly comply with the statute and proactively notify everyone of their possible rights as indigents.”

Michel said he was concerned that the 1,000+ people making their first Municipal Court appearances during Warrant Withdrawal Wednesdays may not have been fully informed of their rights by all the judges.

White, during the Community Justice Council event, also said that she evicted the press from Milwaukee Municipal Court during a Warrant Withdrawal Wednesday.

“I ran them out of the building,” she said. She said she did not know if she had the authority to eject the press from public courts, but that she was concerned with privacy issues.

Courts and courtrooms are generally presumed to be open to the public in Wisconsin.

Court officials said they would track the long-term results of Warrant Withdrawal Wednesdays to determine how many defendants default.