DeVos All Wrong on Charter Schools? 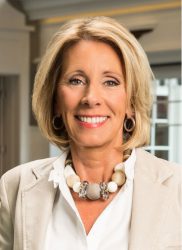 The recent nomination of Betsy DeVos as US Secretary of Education has stirred up the usual suspects. Those who view themselves as defenders of public schools view her as an enemy because of her long-standing advocacy of charters and choice in education. Those who support school choice tend to view her as an ally. Lost in this argument is whether she would be good or bad for charter school quality.

The growing importance of charters in the Milwaukee K-12 education scene is pointed up in data collected by Journal Sentinel columnist Alan Borsuk on enrollments over time, used to create the next two pie charts. Enrollment in traditional MPS schools has steadily declined over the years. Eight years ago, in 2008-2009, 68 percent of Milwaukee students attended conventional MPS schools, as seen in the first chart. By this fall that had dropped to 56 percent, as the second chart shows. 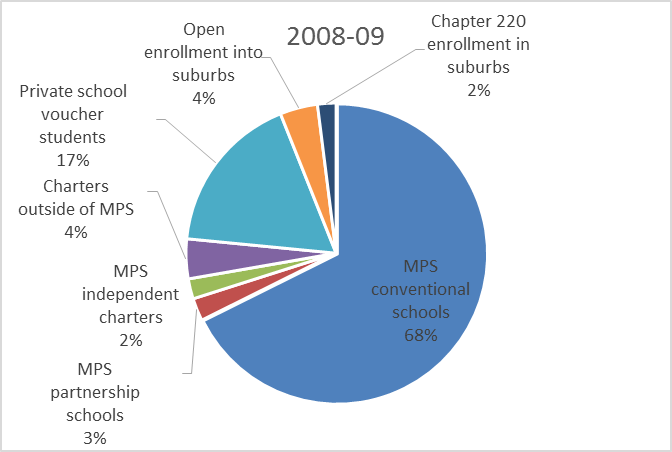 At the same time, two other groups of schools have seen substantial growth in enrollment: private schools that accept vouchers through the Milwaukee Parental Choice Program and charter schools authorized by one of three active authorizers: the City of Milwaukee, UW-Milwaukee, and MPS itself.  Charter schools, the subject of this column, have grown from 6 percent to 13 percent of Milwaukee enrollment. 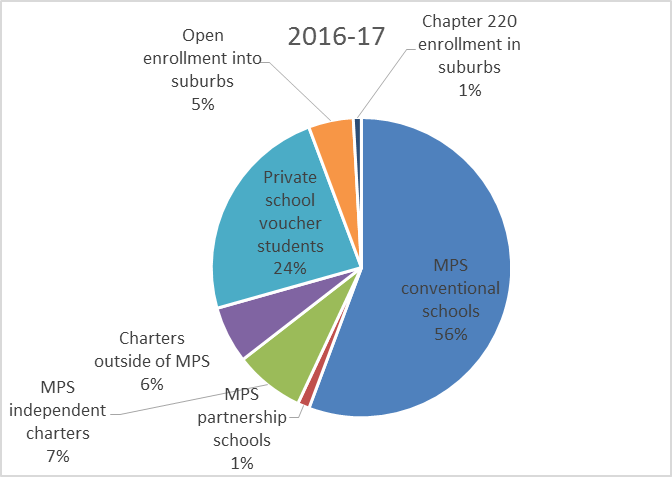 After skipping a year, the Wisconsin Department of Public Instruction has resumed issuing its “school report cards.” The latest reports are based on the performance of schools and their students during the 2015-16 school year.

(Unfortunately the latest school report card does not give performance data for schools accepting vouchers. If, as promised, they are included next year, I plan to analyze the story they tell.)

The independent charter schools are rated using the same metrics as traditional public schools. The next chart shows the ratings from lowest to highest. The height of the bar reflects the numerical rating of the school. The bars are color coded to indicate whether they are conventional public schools or, in the case of charters, the authorizer. The dotted line shows the rating for MPS as a whole. 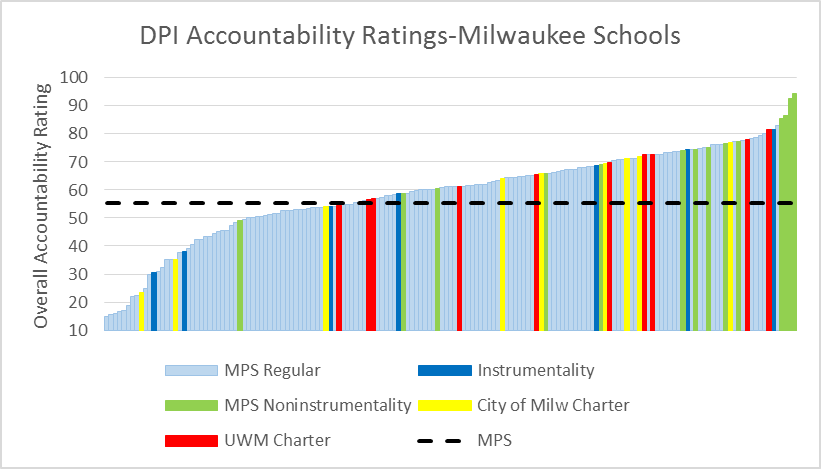 Clearly a school’s legal status—whether it is a conventional public school or a charter—is not the whole story. That said, charter schools as a group are overrepresented among those earning the top DPI ratings. In addition, most outperform the MPS district average. Whereas 70 percent of charter schools are rated as Meeting Expectations or better, only 37 percent of conventional public schools do. While no guarantee of quality, the growth of charters has clearly been a positive.

Measuring school quality is not an exact science. Sometimes the authorizer and DPI agree on a school’s effectiveness, and sometimes they come to opposite conclusions. The most egregious example of the latter is offered by the case of Urban Day School. It was closed at the end of last year, in part, according to the Journal Sentinel, because it was struggling to meet the expectations set by UW-Milwaukee, its authorizer. Yet its state report card rates Urban Day higher than any other UWM-authorized school.

On the other hand, sometimes the authorizer and DPI agreed. North Point Lighthouse Charter School was closed by the city. It was rated “Fails to meet expectations” by DPI.

Traditionally, schools had been evaluated by looking at their inputs, such as their physical facilities, budgets, and credentials of their teachers. These factors were relatively easy to measure. Unfortunately a growing body of research finds they are poor predictors of student outcomes, particularly when social and economic factors are taken into accounts.

Lacking the ability to clone identical students who could be sent through a variety of schools, to assure that whatever the difference in outcomes is due to the school, researchers have turned to two models.

One is based on the usual requirement that if applications to a charter school (and in Wisconsin those accepting vouchers as well) exceed the available capacity, a lottery be held to determine who gets in. In this model the researchers follow both the lottery’s winners and its losers to see if there are significant differences, which can then be attributed to the school.

For example, a recent study in Louisiana found that participation in the voucher program there “substantially reduces academic achievement.” On the other hand, a study of Boston charter schools found they increased pass rates on Massachusetts’ exit exam, increased the likelihood of qualifying for a state sponsored scholarship, boosted SAT scores, the rate of taking Advanced Placement (AP) exams, the number of AP exams and AP scores, and improved college outcomes.

This research model is only useful where demand for charter seats exceeds supply. It may also tell little about the effects of charter schools that don’t have waiting lists.

Again, however, chartering does not guarantee effectiveness. In another study, CREDO found that students of online charter schools had “significantly weaker academic performance in math and reading, compared with their counterparts in conventional schools.”

The idea behind charter schools combines flexibility and accountability—flexibility to try their educational vision and accountability based on results. Too often, traditional public schools, particularly in large urban districts had neither. They were forced to follow the same educational model as every other school. Yet, no matter how poor the results, they were seldom closed or changed.

It is clear that DeVos believes in the flexibility half of the charter school model. In Michigan, where she has become very influential, some 40 different institutions—mostly universities–issue charters to schools. The Michigan legislation created substantial financial incentives to issue charters. However, no one has the power to discipline authorizers whose charter schools falls short.

The result is that Michigan’s charter school segment has expanded rapidly but the results have fallen short.  An Atlantic article on Detroit schools describes some of the problems. A report on the Michigan charter authorizers from the Education Trust-Midwest concluded:

Michigan charter school authorizers’ performance overall has improved marginally over the last year, but remains terribly low compared to leading states’ charter sectors … Some of Michigan’s public universities have betrayed the public trust in them – and the investment of millions of Michigan taxpayers’ dollars – by consistently failing their students for years.

The report offers a number of graphs such as the following, comparing the performance of African American students in Detroit charter schools on Michigan’s 8th grade math test to that of students in the Detroit Public Schools (shown as a black bar). The point is that a student would be better off sticking with the traditional public school than moving to an average charter school in Detroit.

This story is opposite to the one told by the Wisconsin report cards. In Milwaukee charter schools pull the average up. In Detroit—and throughout Michigan—they seem to push it down.

Although DeVos’s exact role in creating a system where charter school authorizers cannot be held to account is unclear, it appears she played a major role in beating down proposals to impose some accountability on the authorizers. The Michigan charter school mess points up the danger of marketplace fundamentalism, the belief that markets are self-regulating. Instead, throughout our economy effective markets often depend on smart regulation.

7 thoughts on “Data Wonk: DeVos All Wrong on Charter Schools?”