She creates little worlds of glistening glass sculptures that leave you entranced yet puzzled. 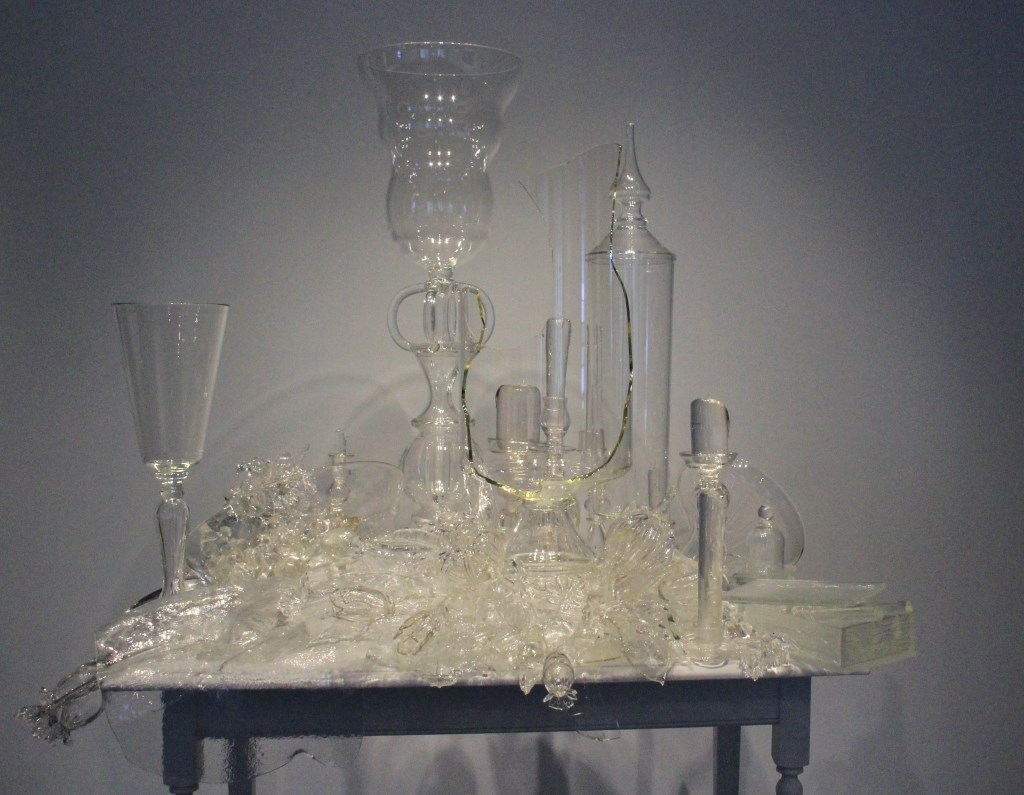 There’s something magical about Beth Lipman‘s art. She makes handblown glass objects of exquisite craftsmanship, but then arranges them to create a kind of scene that’s both serene yet chaotic. Serene because the glistening glass enchants us, but chaotic because the glass objects may be laid on tables or on “what not” shelves (a 19th century conception), and some of the objects may seem to be falling down or even broken on the floor. The bling of the glass is captivating, and identifying their forms is part of the fun. With kids it’s a kind of “where’s Waldo” quiz — “which animals do you see?” They love these pieces. But then comes the thought-provoking part  — “What do you think happened here?” — that can leave adults as puzzled as children. The objects seem so familiar but the scene is disorienting, make of it what you will.

A small lovely exhibit of Lipman’s work at the Jewish Museum through January 8 is called “Once and Again,” which offers no particular clues to what it all means. At a panel recently at the Milwaukee Art Museum, Lipman referred to herself as a minimalist/maximalist. Her laid tables are based on the tradition of 17th-century Dutch still life paintings, but are quite contemporary. Her work is both imposing and unusual, yet familiar and accessible. All of these contradictions help give the art its magical power.

Beth Lipman was born in Lancaster, Pennsylvania. Her mother was a craft artist, from whom Beth learned about painting and folk art. Beth often accompanied her mother when she sold work at art fairs. After college and graduate school, Lipman worked at Urban Glass in New York City, first as a teaching assistant and then as a teacher. She became the head of the Education program at Urban Glass. 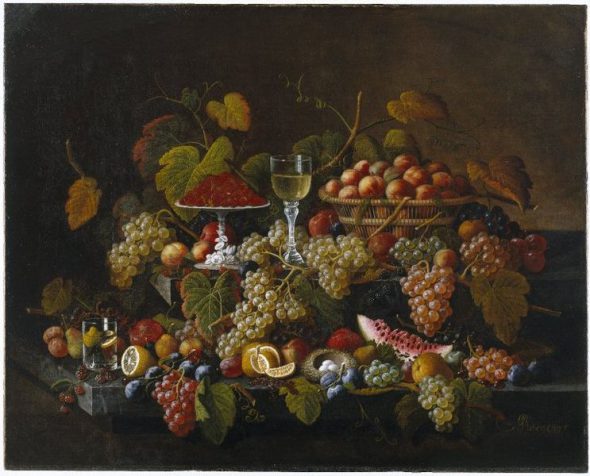 Still Life with Fruit by Severin Roesen (circa 1815-1872) [No restrictions or Public domain], via Wikimedia Commons

In 2000 the art critic and curator John Perrault invited 15 artists to create a response to an artwork from the Brooklyn Museum’s collection: 19th century German artist Severin Roesen’s “Still Life with Fruit.” Lipman created her first glass sculpture, inspired by the still life. In the excellent video accompanying the show, Perrault describes the visceral appeal of glass and cites Lipman as the rare artist who can go beyond visual beauty to create art of profound significance.

Lipman continued her work with glass sculpture and in 2003 was selected as artist-in-residence at the Kohler Company. As with the Brooklyn Museum challenge, this was a great opportunity to once again step outside her comfort zone, in this case by working in an industrial setting. Lipman had never worked in ceramics before, but her previous mold-making experience allowed her to translate that knowledge and create ceramic swags composed of hundreds of hand-built and molded ceramic shells.

After the Kohler residency Lipman was hired in an administrative position at the John Micheal Kohler Art Center and she settled down in Sheboygan, Wi. After the birth of her daughters she decided to devote herself full-time to making art. 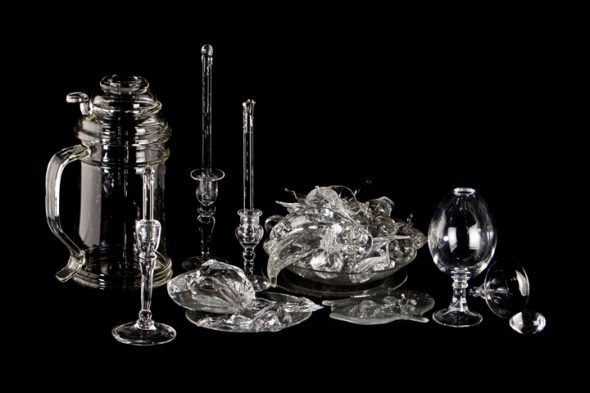 Lipman says she’s developed a vocabulary her work draws from, including objects from the Baroque still life tradition, natural objects, dead birds, various vessels, flowers, fruit, always food. She creates the objects and then arranges and plays with them to create what she describes as three-dimensional drawings. She incorporates her mistakes, the shards, the broken elements, combining the perfect and the damaged in her complex finished works. She has been working on and off for 15 years with the concept of her laid tables, creating a vocabulary of objects and then arranging them on a table, a kind of “vanities” in glass that references the traditional Dutch still lifes.

There are three laid tables in the Jewish Museum exhibit, each with different themes. Listening to Lipman describe her work and process at her MAM talk, I was awed by her rapid-fire allusions to so many ideas. She’s bursting with them. Nature, art history, deep time, science, the environment, human emotions, these and other ideas may or may not figure in her art. (She also has a down-to-earth and witty style of speaking that makes the art come alive.)

Lipman says her work is about mortality, about death. Objects from nature such as shells, leaves, water, animals and landscape can figure in her art. The work subtly reflects the passage of time. Time seems in flux, the scenes she creates seem to be captured in mid-moment, both frozen and yet with the feeling of motion.

In addition to the laid tables is another work, “What Not II”, 2010, where Lipman departs from her use of clear glass and uses opaque black glass to create a symbolic portrait. A what not was a tiered-shelf common in 19th-century parlors to display treasured knick knacks. Lipman’s version has personal significance because her shelves have found objects, gifts, and pieces she got from “trades” with other artists. The objects and shelves are then set up to align with body parts: the head, heart, feet and on the fourth shelf the moment mori — the inevitable moment of death traditionally evoked in the old still lifes.

Also on display are photographs by Lipman. She began working in this medium after seeing her work being photographed by others for exhibits and catalogs. She has taken her three-dimensional sculptures and made them two-dimensional, sometimes re-contextualizing them through technological maneuverings as in her lambda prints. The photograph is printed on plexiglass so the light areas are clear. The photo is then backed by another white piece of plexi and casts a shadow on it. It’s a ghostly effect, with a Trompe  L’Oeil or “fool the eye” feeling as well. This technique again suggests movement and instability, as do the the laid tables.

A photograph made during an artists’ retreat at Lake Clark Alaska, in 2014, is called “Chalice with Detritus,” in which Lipman places a hand-sculpted chalice she created in a lush, flower-laden forest that’s also been used as a dumping ground for the detritus of our age; computer parts and other plastic objects embrace the foot of the elegant chalice.  Another photograph, “Gazing Ball in Burnt Forest” features a glass skull and a gazing ball — both sculptures she created — set on the dark, moist ground in an area that had been destroyed by a fire. Bits of new life arising after the fire can be seen in the bright green horsetail ferns (called equisetum or dinosaur grass), a plant which has flourished for 200 million years. We are ultimately reminded of the resiliency of life and the connection to ancient geological time, but captured first by the beauty of the images. Life doesn’t stand still and neither does Lipman’s work; she is still moving forward, embracing challenges rather than the comfort of repetition.

“Once And Again,” Beth Lipman at the Jewish Museum Milwaukee 1360 N. Prospect Ave., Through January 8, 2017. The museum will be open on Christmas Day and will screen the 1950 film, The Glass Menagerie.