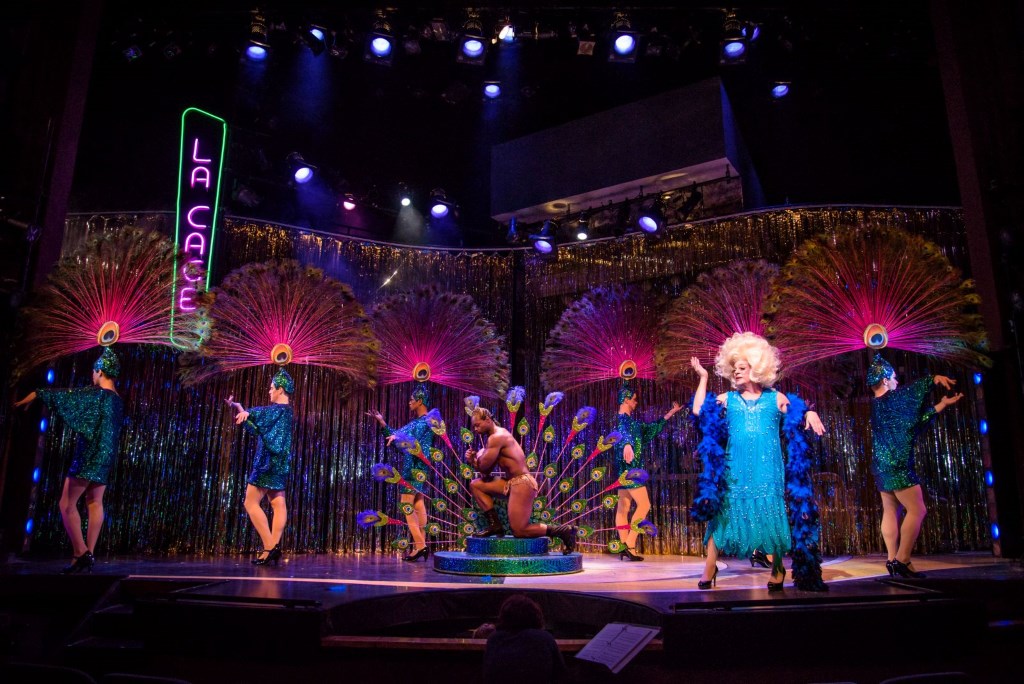 When La Cage Aux Folles (The Birdcage) exploded on Broadway in 1983, winning every honor in sight, it represented the perfect timing of strong material and social immediacy, at a time when the shunned homosexual community was coping with this new thing called AIDS. Couched in humor and family values, the bold treatment was a tuneful cry for acceptance, and it was very much needed.

When I heard Skylight Music Theatre was staging La Cage as its holiday show through Dec. 23, I wondered whether time had passed the story by, though it is a first for the Skylight. The outline has Georges, owner and emcee of a drag club, and his star attraction and partner, Albin, pretending to be straight to help their marriage-minded son impress the girl’s parents, particularly the father who is seeking election as a gay-bashing conservative.

The domestic contrivance and nightclub settings may have worn a bit with material that started in France with a play and film in the 1970s. Today, even elements of the gay community have mixed feelings about men in high heels shrieking like women. Attitudes may be changing after centuries of male performers mincing in women’s clothes..

I was wrong to worry. I neglected how well this show is built, the humanity lurking within it and how time has not changed things all that much.  Audiences today are clapping even harder and cheering the finale theme, “The Best of Times Is Now.” It seems we need La Cage more than ever.

Harvey Fierstein’s book has some creakiness in the last act plotting, but the audience will seldom notice in this musical comedy, no more than they did some opening night mishaps.

Central to the ever-green success is the composer and lyricist, Jerry Herman, whose gift for catchy songs is mightily known from Hello, Dolly! and Mame. But his best songs are also character-developing. Even the Cagelles’ songs reflect Herman’s canny, emotionally-attuned sensibility. Familiar patterns of drag shows get a boost from the music and the sense of style provided by Chris March’s costume inventiveness, which rightly doesn’t dominate but furthers the proceedings. As does Liliana Duque Pineiro‘s shimmering gold set.

From shock that men can do such dance splits, the patrons quickly move to delight in the showmanship (or should it be womanship?). The Cagelles are so impressive they merit more than this mention: Ryan Cappleman, Doug Clemons, Will Henke, Sean Jackson, Benjamin J. Ludwig, Jorge Quintero and Brett Sweeney.

There is a Broadway-sized sound anchoring the singers even more than their advanced mikes, thanks to music director Shari Rhoads and her excellent seven-piece pit band.

But the show rises and falls on the acting and singing of its leads, and here we have entered the land of the rising moon. Full disclosure: my oldest daughter served as Ray Jivoff’s assistant and three of my other children took his summer classes, all decades ago. And I have reviewed Norman Moses since he was a student at UW-Milwaukee. As a result, they have few shticks I don’t know and a polished professionalism to admire.

But Jivoff has never been better in his full-throated solos and basic characterization as Albin, who as Zasa headlines the gay nightclub and demands full diva fidelity to her tantrums. Since Jivoff is also acting artistic director well known to the Skylight audiences for his showcase revues, they will appreciate how truly he adds emotional dimension to his stage technique, particularly in the first act finale that awes the house into attention, “I Am What I Am.” 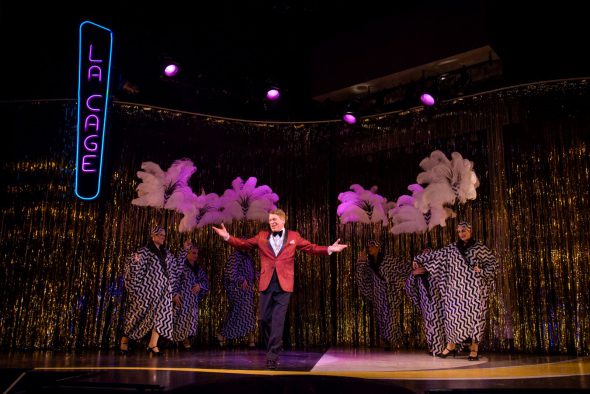 As Georges, Moses has what sometimes is seen the thankless role of (as the dialogue jokes) a regular homosexual to Albin’s transvestite. But he enjoys his fleeting opportunities for husbandly exasperation and it is his exact warm baritone and unifying presence that carry both the show’s love songs and call to duty songs (“Look Over There”), which are  highlights.

Perhaps partly because they have acted together so frequently in quite different parts, there is a warmth and trust between Jivoff and Moses that naturally spills over into the domestic closeness.

Their son, Jean-Michel, is the result of a youthful dalliance by Georges, but Albin has been his devoted mother, now forced to hide from the fiancée’s rigid parents.

The 1996 comedy The Birdcage, directed by the late Mike Nichols and starring Nathan Lane and the late Robin Williams, had a script by Elaine May that smoothed out, for the big screen, some of the plot manipulations. It eliminated the intruding Jacqueline who is required to sing strongly (achieved by Rhonda Rae Busch) but never seems more than a plot contrivance. Indeed the second act forces Jivoff as Albin into a series of physical maneuvers that only his timing and the sense of a real person underneath make palatable.

As Jean-Michel, the enamored son, Colte Julian is mimicking rather than feeling a connection to Albin and Georges, but he produces powerful singing.

It almost seemed as if Shawn Holmes as the outrageous butler (or is it maid?) had brought his own clique with him opening night, but even without them his posturing as Jacob was delicious slanging around among gay stereotypes. As Anne, the bride-to-be, Stephanie Staszak has nothing to do except look pretty and react clearly, both of which she does well. But it sticks out that the role requires so little.

Elsewhere the show requires the tops in spectacle and performances. And it delivers. 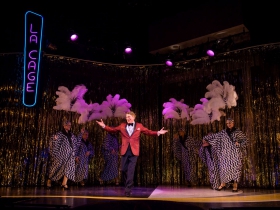 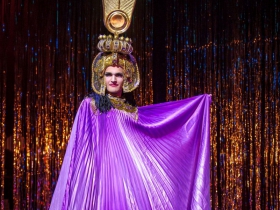 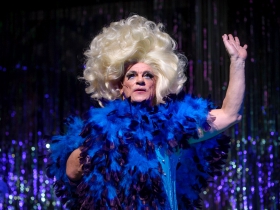 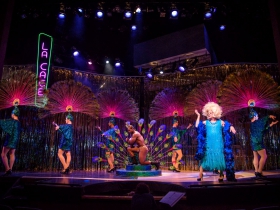 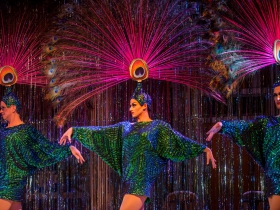 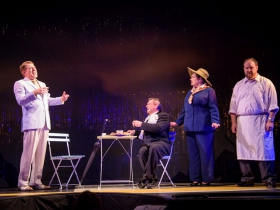 One thought on “Theater: We Need ‘La Cage’ More Than Ever”