A four-star hotel is nearing completion in the heart of downtown Milwaukee. The Westin Hotel project celebrated its ceremonial topping off on Wednesday and crews are on-site daily working on virtually every floor of the nine-story building at 550 N. Van Buren St.

When complete, the 220-room Westin Hotel will be connected via the US Bank Center‘s skywalk system to the recently completed 833 East office tower, the US Bank tower and a number of other office buildings. It is expected to open in June 2017.

Amenities at the hotel will include a fine dining restaurant, large lobby bar, fitness center, 9,000-square-feet of meeting rooms and a 5,000 square-foot ballroom. The restaurant will be an Italian steakhouse developed in partnership with Lettuce Entertain You Enterprises of Chicago. Virtually all of the hotel amenities will be consolidated on the hotel’s third floor, which connects directly with the skywalk system.

Construction on the hotel began in February and the hotel has recently reached the height of the adjacent skywalks. When complete the hotel will be one of the first things people see when they enter the city by exiting Interstate 794 at N. Van Buren St., a welcoming sign of life compared to the surface parking lot and parking garage that has long greeted visitors.

General contracting services on the project are being provided by J.H. Findorff & Son Inc.. Arrival Partners, led by Doug Nysse, is serving as project planner and development consultant, with Nysse’s former firm Kahler Slater serving as the project architect. Jackson Street Holdings is the project developer.

Jackson Street Holdings is no stranger to Downtown. Besides having its offices on N. Jackson St. (including a model guest room for the Westin), the firm has also developed the Aloft Hotel, Milwaukee Marriott Downtown and recently-opened SpringHill Suites Marriott. The Westin also marks the third partnership between the development firm and hotel operator White Lodging Services Corp. Jackson Street Holdings is led by Ed Carow, Randy Erkert and Mark Flaherty. The firm has a pending proposal to develop two hotels on a city-owned lot at N. 4th St. and W. Wisconsin Ave.

The site for the Westin Hotel was created from a 2010 redevelopment of the US Bank Center parking garage. That garage was pushed to the southern edge of the site, creating a courtyard space between the garage and office tower. The future hotel will be connected directly into the US Bank Center‘s skywalk system.

The hotel project was subject to a one-week lawsuit early this year from Irgens Development Partners, which is developing the 833 East office tower just to the east. That suit, concerning an easement Irgens has with site owner US Bank, was filed on January 20th and dropped on January 29th. Stephen Kravit, attorney for the hotel developers, says the project was not altered in response to the lawsuit. 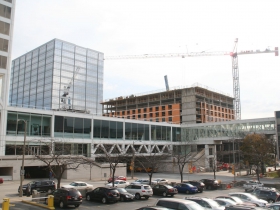 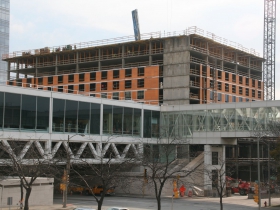 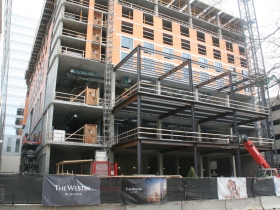 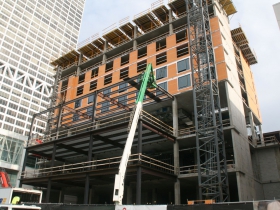 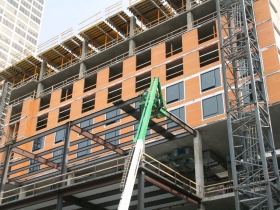 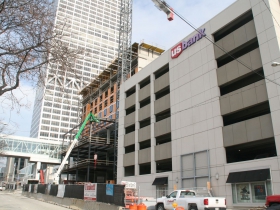