Exploiting the Horror in Orlando

Chicagoan creates horror show reveling in shootings at the Pulse night club. Why? 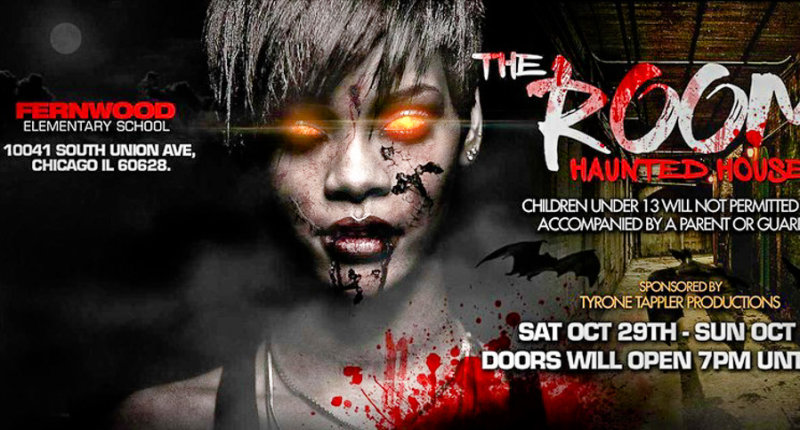 The Room: A Journey to Hell

Sunday, June 12 was the last day of PrideFest Milwaukee 2016. Spirits had been sky-high all weekend, and we were well positioned for another record-breaking, historic celebration.

I check Twitter first thing every morning. And, that morning, I couldn’t believe what Twitter was telling me.

Everyone get out of Pulse and keep running. 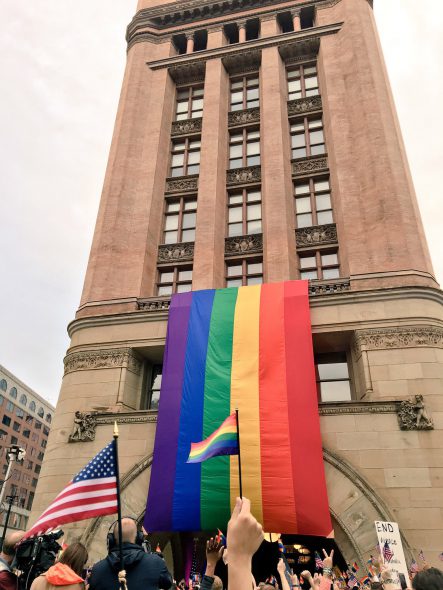 Although most escaped, many were left trapped in the bar with no way out, nowhere to hide, no way to overtake the heavily armed gunman. Some customers only survived by hiding under the corpses of fallen friends. Others threw themselves into the rain of bullets so that total strangers could escape. For four hours, the last 30 hostages were barricaded in the club with the killer – who threatened to make them wear explosive vests and detonate them as human bombs against the authorities.

When the horrifying night was over, 38 people were dead and 64 were injured. Eleven of those injured would die in the days ahead. Some people remained hospitalized up to three months.

The largest mass shooting in American history left Orlando’s Latinx and LGBTQ communities emotionally shattered. With heartbreaking vividness, first-hand social media reports took us back to the scene of the crime again and again. For weeks, we were haunted by the final outbound messages of Orlando victims.

So, ask yourself this question: who would ever want to relive that horrible night at Pulse Nightclub?

Ask Tyrone Tappler Productions of Chicago. Tappler’s website describes him as a playwright, licensed minister and visionary (among many other things) who believes in reaching people in an unconventional way. He certainly lived up to his reputation when he announced plans on social media to host “The Room: A Journey to Hell,” a Chicago haunted house with “in-your-face scenes of dark reality.”

“It’s time to face the consequences of your actions,” read the event listing for “Chicago’s most anticipated attraction.” “The choice is life or death; sin or salvation; heaven or hell. The scenes will be action-packed, real and jaw dropping.”

The Room was no ordinary haunted house. It was essentially a hell house — a Halloween attraction, yes, but operated by a fundamentalist Christian organization to expose the wages of sin.

Tappler’s Twitter account only had 149 followers, so it’s not surprising that nobody cried foul as The Room slowly moved from concept to reality. While the world was still reeling from the Orlando news, Tappler was asking his audience for a baby crib and medical equipment for The Room’s “crazed abortionist” feature.

And it just got stranger.

“EXTRAS NEEDED! For THE ROOM EXPERIENCE,” tweeted Tappler on July 20. “We need individuals to be apart of a ‘Gay club Scene’ wardrobe: tight.” For months, it was unclear what that scene might include, but by September 14 a chilling vision was taking shape. “For those who will journey THE ROOM. Please note you will endure loud bangs, screams, gun fire and strobe lights.”

In early October, the production announced that “dead” extras were needed for two big scenes: “Nine Lives: A Church Massacre” (based on the Charleston shootings of 2015) and – wait for it — “Pulse.”

“Hey do you want to be apart of THE ROOM REALITY HOUSE? We need dancers to be apart of a club shootout scene,” tweeted the last calling call on October 12.  “Club Pulse, Dancers, Victims … CAGED PEOPLE/SCREAMERS, Extras needed trying to escape a cage! … SOUNDS INTERESTING? COME OUT THIS SATURDAY!!!”

First, let’s consider that this event was scheduled to take place at a Chicago elementary school. Then, consider that youth aged 12-18 were actively recruited for months to reenact these horrifying scenes. Finally, let’s consider that The Room was a for-profit venture, unbelievably charging people $10 each to experience and judge the murdered victims of Orlando.

“I really got my zeal and passion back,” Tappler wrote on Twitter. “We are bringing Jesus in Halloween… this is ATONEMENT SEASON.”

Atonement arrived for Tappler on October 28, when Chicago Public Schools revoked the event license and banned The Room with less than 24 hours’ notice. Officials claimed that event organizers “mischaracterized” the true nature of The Room. The event quickly disappeared – as did the organizers, but not without promising refunds and posting a strange last tweet about “going global.”

The Room was guilty of more than just bad taste. Its organizers had torn open a gunshot wound that had just barely stopped bleeding.

I like to believe that on Sunday, June 12, we all became Orlando. This wasn’t just armchair activism: we weren’t just changing a profile picture or using a new hashtag. We all became Orlando because Orlando changed us forever. We were reminded that violence will find you anywhere, where and when you least expect it, and nobody is ever truly safe. We hadn’t felt that way since September 11, 2001. We never expected to feel that way again.

We knew we could not allow ourselves to surrender to fear – and trust me, there was a lot of irrational, fearful speculation circulating that morning. We vowed to live proud for those who had been silenced. We would not cancel PrideFest under any circumstances. 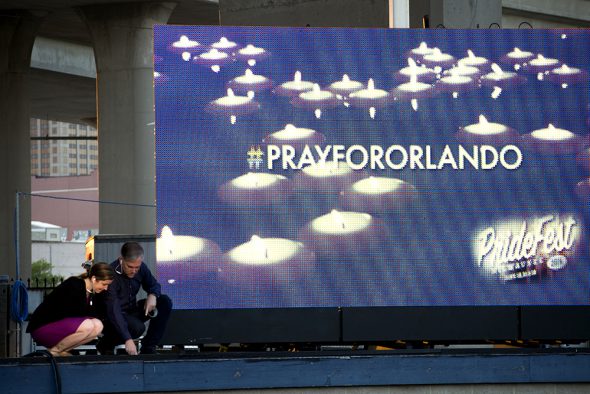 By 10 a.m., we had connected with federal, state and local authorities, introduced full body metal detectors at the front gates, escalated inspection protocols, and layered additional security staff at every level of the operation. All of the petty customer complaints about long security lines suddenly became compliments about our rapid response.

The show went on.

I remember taking the PrideFest main stage, with fellow board members, festival volunteers and elected officials, to honor the victims of Orlando with a moment of silence at 3 p.m. that Sunday. Our audience was so emotional that even one moment of silence could not be guaranteed.

I remember joining hundreds at Milwaukee’s City Hall on Monday, June 13, where we held an emotional community vigil under the city’s largest LGBTQ pride flag.

I remember meeting Christine Leinonen at the Human Rights Campaign Annual Dinner in September, as she silenced over 4,000 guests with her plea for an end to the gun violence that had taken her son Drew’s life – and so many other lives — in Orlando.

While visiting New York City and the Greenwich Village Halloween Parade last weekend, I constantly found myself looking for emergency exits, identifying suspicious characters, tensing up around even the most mundane aggressions. There’s an edgy new anxiety still simmering under the surface of nightlife and LGBTQ culture, fearing what might happen next.

We don’t need an Orlando Hell House. We’ve been living in one ever since Sunday, June 12. And we are still running from what that night has done to us all. 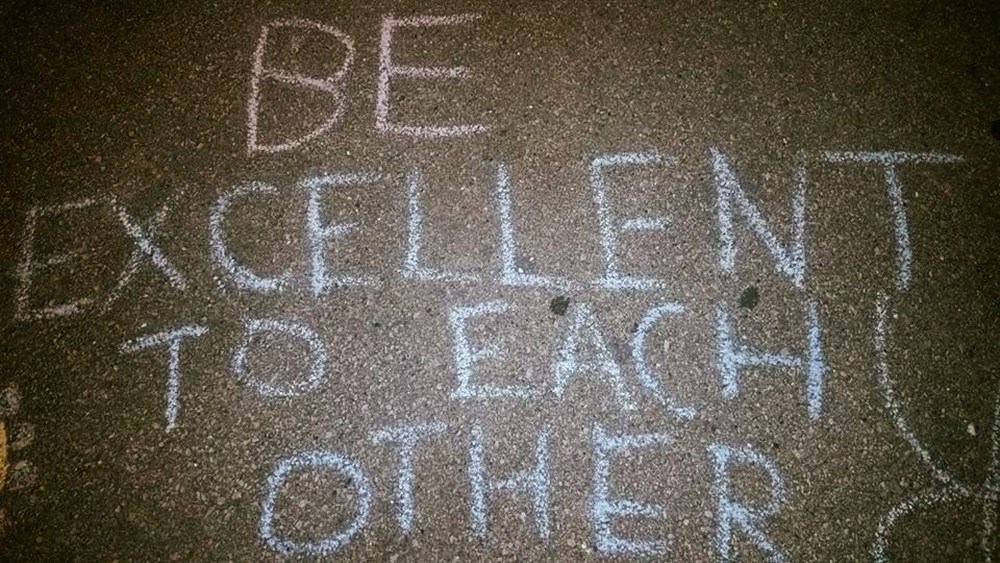 Be excellent to each other. Photo by Kate Sherry.

One thought on “Out Look: Exploiting the Horror in Orlando”