By Jabril Faraj, Milwaukee Neighborhood News Service - Oct 18th, 2016 09:52 am
Get a daily rundown of the top stories on Urban Milwaukee 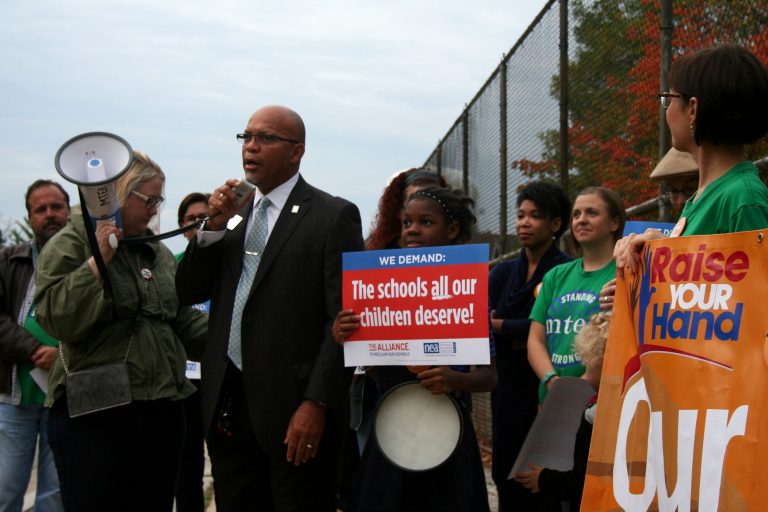 Despite the recent news that the Milwaukee Public Schools district is not subject to the Opportunity Schools Partnership Program in 2016-17, Milwaukee Teachers’ Education Association President Kim Schroeder said the work is not done, calling on the state to fairly fund public schools.

“We’re going to continue pushing what’s best for our students and our community. We know the battles aren’t done — we’re not naive to that — but, right now, we’re kind of happy,” he said, crediting Milwaukee Public Schools (MPS) teachers, students and parents for the victory. “Something actually went our way.”

The controversial legislation, a Republican-led effort to turn failing schools over to charter and private school operators, was met with intense resistance from MPS parents and teachers. Former OSPP Commissioner Demond Means, who pledged to work with MPS, resigned in June after the district rejected a partnership proposal. In the wake of that decision, Republican legislators threatened to sue the district and reduce its funding unless it agreed to comply with the law.

But, due to preliminary information from district report cards, MPS is no longer in the lowest performance category and therefore not subject to OSPP. The Department of Public Instruction (DPI) sent a letter to that effect to MPS before the Oct. 15 deadline set by OSPP, according to DPI spokesperson Tom McCarthy. He said no districts in the state met the criteria for OSPP. 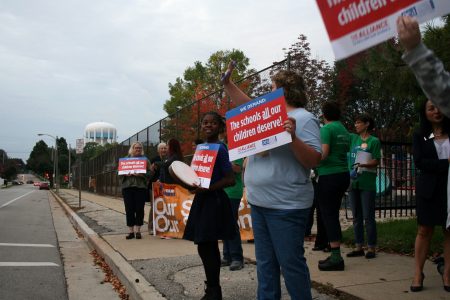 A statement by MPS Superintendent Darienne Driver and MPS board President Mark Sain said, “MPS is headed in the right direction.” It cited assessment data from last year that shows student literacy is improving across all grade levels and the number of students on target for reading proficiency has increased.

State Rep. Dale Kooyenga and Sen. Alberta Darling, the legislators who authored the OSPP, did not respond to phone calls and emails requesting comment.

Milwaukee parents, teachers and elected officials recently called for more public school funding by walking into 117 MPS schools with students as they arrived. Milwaukee-area participants joined more than 2,000 schools in 232 cities across Wisconsin and the nation in the demonstration, which was organized by The Alliance to Reclaim Our Schools.

Individuals who attended a walk-in at Neeskara Elementary School, 1601 N. Hawley Road, said MPS needs more resources to provide children, many of whom live in poverty, with a higher quality of education. They said smaller class sizes, fully staffed libraries, out-of-school learning opportunities, up-to-date technology, sufficient learning materials for students, and art, music and gym classes can only be achieved through increased funding.

“We want the same thing for our kids that other parents want for their kids — it’s that simple,” said Milwaukee Mayor Tom Barrett. “It’s about equity, and making sure that every kid has a fair chance.”

Public school districts in Wisconsin are funded with a combination of state, federal and local dollars; in most districts, the vast majority of those dollars come from property taxes. Only 31 percent of funding for MPS comes from property taxes. In 2014-15, MPS received a total of $11,821 per student from state funds and property taxes; the Elmbrook (Brookfield) school district, which Kooyenga represents, received $12,447. Milwaukee’s median household income is more than $17,000 less than the statewide figure of $52,622. MPS receives additional state funding because more than 50 percent of the district’s students qualify for free or reduced lunch.

Sheena Simmons, a mother of three, said she chose Neeskara because it caters to children with moderate hearing loss, a condition that affects her oldest. Once her daughter was there, it just made sense to send the other two.

“What makes one child different than the other? They’re all children,” Simmons said. “What’s the difference? Money makes a difference? I think they need the same education.”

In 2011, when Republicans gained control of the state legislature, state funding for public schools was cut by more than $430 million. Between 2011 and 2015, state aid to MPS decreased by $258 per student, a difference of more than $20.7 million overall.

“The children of this city have been egregiously and purposefully underfunded by GOP legislators in this state,” said Amy Mizialko, vice president of MTEA. “Our students’ lives matter … and we are demanding investment in their lives and in this community.”

Earlier this year in the Milwaukee area, voters in the Grafton, Mukwonago, Menomonee Falls, Muskego-Norway and Nicolet school districts approved five of eight proposed referenda to fund building improvements and raise district revenue caps — which limit how much districts can receive in state aid and property taxes. The total cost of the five referenda exceeds $170 million. In 2015, 62 of 90 similar referenda passed statewide, according to DPI.

MPS has not sought a referendum since losing one in 1993. According to Wisconsin law, if a district-proposed referendum fails to pass, that district cannot attempt another one or borrow money for two years. State legislators have proposed further limiting when districts can hold referenda as recently as late last year.

“Our public schools are here to educate all children,” Sain said in an interview. “They don’t pick and choose which children they want to serve or which families they want to … work with.”

He added, “Equity in funding should be there for public schools.”

Republican state legislators have said OSPP was necessary because they are concerned about raising performance. But Democratic State Senator Nikiya Harris-Dodd, who represents much of Milwaukee’s central city and near west side, called their actions “a concerted effort to dismantle public education in its entirety.”

Schroeder urged GOP legislators to recognize the progress MPS has made and to fix “funding flaws” to provide public school districts with more resources. Fair Funding for Our Future, a funding plan DPI first proposed in 2011, would provide more money for students who are economically disadvantaged and simplify the funding formula. The plan would cost about $570 million more than the state budgeted in 2015; Schroeder said wealthy individuals and corporations should foot the bill.