Inside the Renaissance Book Shop 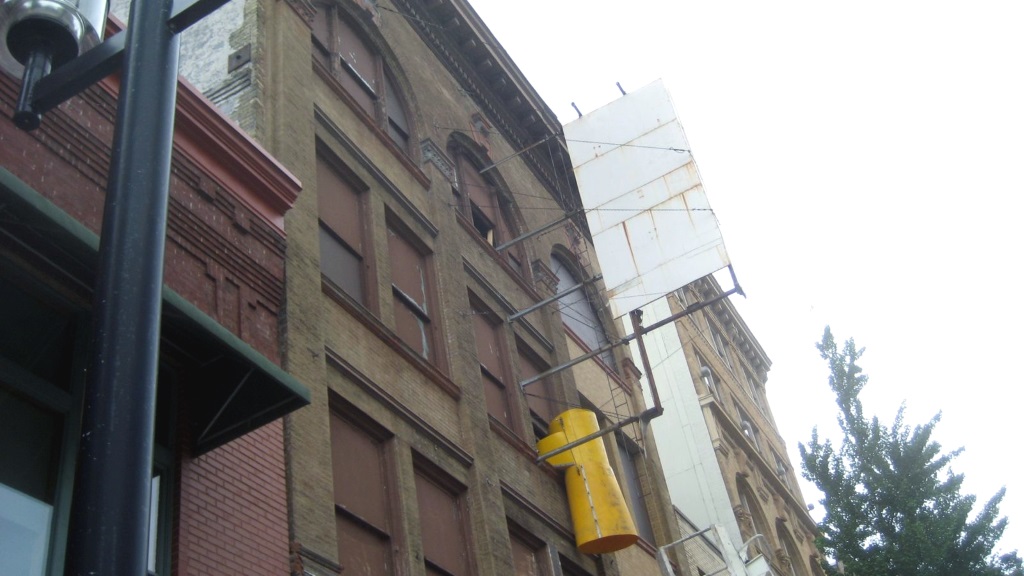 On Thursday, October 13th, as workers made the initial steps toward the deconstruction of the Renaissance Book Shop, 834 N. Plankinton Ave., Kathryn Thoman of Recyclean, Inc. prepared to show a visitor around the old four-story building. Thoman had connected to me before, when we first reported that the building would be deconstructed, and now she was showing me around as the task was being undertaken.

Thoman and her firm are on a mission to “facilitate and educate the world on how to give back to the environment, by thinking past the dumpster.” She is adamantly opposed to what she sees as the waste generated by conventional demolition. 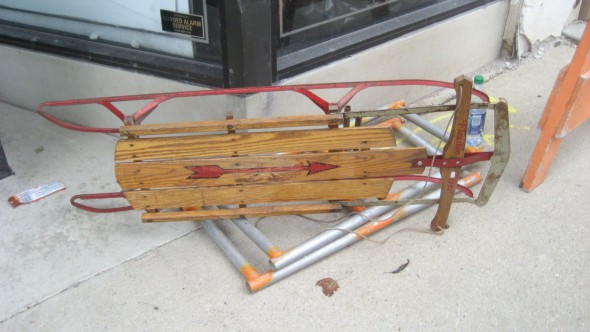 A vintage Flexible Flyer sled in mint condition was on the sidewalk, salvaged that morning from among the millions of items in the 18,560-square-foot building constructed in 1895. That one will go home with Thoman, cheating the landfill of at least one item from the massive and eclectic inventory within.

Just inside the front door, which is papered with official notices of condemnation, sat a jumble of cardboard boxes of unknown contents. Not a one stood upright. Atop the pile was an open box filled with cylinders of white tape — the cash register receipts of years of commerce that had taken place here.

Thoman is a petite and energetic mother of three teenagers. Her family lives in a pre-Civil War home in northern Illinois, so she knows her way around antiques. She and her crew, who at the moment were attaching yellow tubes to the front of the building to dump the debris that would not make it past the dumpster, have deconstructed numerous buildings. But nothing like this downtown riverfront structure and its jumble of contents. 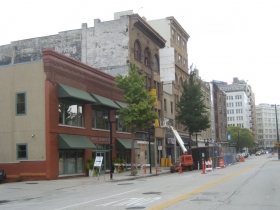 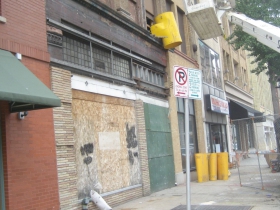 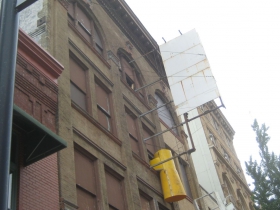 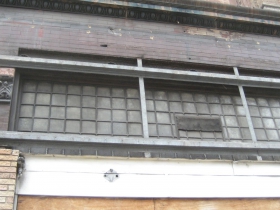 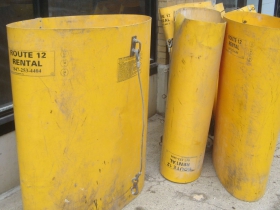 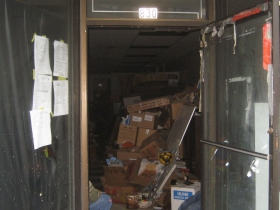 One “For the Books”

“This one is different,” Thoman said. “This one’s for the books.”

Thoman’s going to dig through the contents of the building, of which this is a mere sample, with the intent of salvaging as much of the goods and the structure as possible.

The workers had not yet strung extension cords in the building, to be powered by a generator outdoors, so Thoman’s tour through the building was illuminated by her flashlight and the bicycle light of her guest. This only enhanced the eerie scene in the cavernous building, where orderly rows of bookshelves still arranged by category and whim competed with piles of volumes that had apparently been hastily strewn about during the retreat of the building’s former owner. The paintings on canvas by Wisconsin artists like Morley Hicks were noticeably absent from the room where they had hung for decades.

Thoman headed toward the rear, where broken windows overlooked the Milwaukee River. There, against the east wall of the building was a massive wooden chest whose contents would remain unknown until thousands of books were cleared from in front of it. Thoman found one book atop a pile. 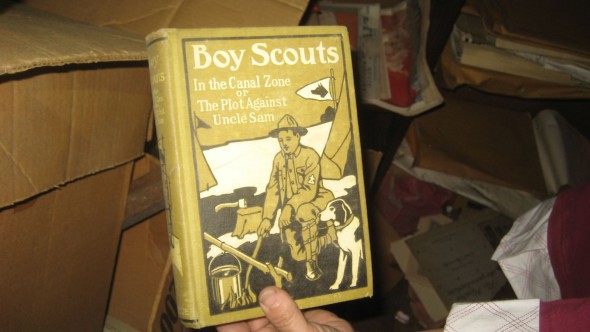 Boy Scouts in the Canal Zone, or, The Plot Against Uncle Sam. Photo by Michael Horne.

It was the Boy Scouts in the Canal Zone, or, The Plot Against Uncle Sam, a juvenile book published in 1911 for an audience born when this building was new. Nearby was a volume of “famous” Science Fiction stories that’s probably only a half-century old. Outside this little nook was a sign hanging from the tin ceiling reading “Upstairs.”

Thoman followed the sign’s instruction, and led her guest to the upper floors. “The higher up you get, the worse it gets,” she said, with almost a sense of relief. It’s a lot quicker to sort through piles of moldy leatherbound volumes than it is to select among volumes of midcentury science fiction and patriotic pre-World War I Boy Scout adventures.

Thoman walks past an old oak desk piled high with a jumble of books and a sign reading “Psychology.” Among the volumes was “Chicken Soup for the Pet Lover’s Soul.” It’s pretty clear that Thoman is itching for the day when she can get that desk out of there.

Thoman respects books, that is clear. She makes a point of not walking on any volume that lies on the floor, a feat akin to climbing a mountain without treading upon any rocks. “I almost stepped on a $4,000 book in the Art Department the other day,” she said, walking past a vintage Mission Style reclining chair that appears to be authentic in every respect, at least from what you can tell from what is visible, which includes three layers of tattered upholstery. But a ton of books will have to be removed before the chair is ready to be inspected and removed. Could it be a Stickley? Thoman’s hoping. It certainly is a sturdy chair, if it can bear this load.

The books in the building will be sorted and donated to charity, she said. Thoman emphasized several times that the intent of the owners for the deconstruction project is not entirely financial, but to see that the salvageable items might be reused. Nobody will ever grow virgin maple again, and no product has ever proven more suitable for its purpose.

A sign above a stack of thin volumes reads “Poetry Here.” This department is in pretty good shape, and some aisles show no carnage at all. These will be priority zones so Thoman can clear out some space for sorting and organizing. But nothing stops this woman dead in her tracks like the miscellaneous item of furniture or fitting that tantalizingly exposes a tiny corner of itself for her inspection.

Thoman is now the mistress of so many safes it would make a bank jealous. The steamer trunks left here once carried a boatload of immigrants to this shore. Forests of maple were sacrificed for the floors beneath. The light fixtures hang in abundance. There is a ready market for all of these things, she says. A client building a mansion of reclaimed materials in Colorado didn’t think he’d care much for virgin growth maple, she said, until he saw the product, and now he’s hooked.

The third floor showed much the same as the second, but was noticeably damper. No longer were the books the only obstacle beneath; the maple floor itself had buckled due to years of leakage that, along with a failing foundation, had tormented the building.

“My favorite is the fourth floor,” Thoman said. “It has the most interesting things.” Among those things were leather-upholstered sofas, tables, a brass chandelier that was soon to be carried downstairs by a worker or two, and an Autocall fire bell that is destined to be repurposed. There were several book presses that would be the envy of anybody with a bindery to run, and too many books to read, along with too many books that, due to their condition, would remain forever unreadable.

Here, lovely 19th century book endplates, which themselves are a recognized art form, lie ruined on the floor. The leather-bound volumes, impossible to sidestep, were slimy underfoot. An odor of mold prevailed.

Thoman headed back downstairs, and when she reached the first floor, she decided to venture into the basement, which by that time had been partially lit by the crew. Paradoxically, the basement was the driest place in the building. Even so, it was receiving a well-needed airing even as a light rain fell outside, visible from the riverfront doors that were opened for the first time in decades. This was the old magazine section, and should be quick work. Of course, with exceptions — several stone capitals from a long-gone building, each weighing hundreds of pounds, were incongruously lying on the floor.

Thoman wants her projects to attract attention, and to change public policy on building deconstruction. In a follow-up letter to Urban Milwaukee, she wrote:

[I] want to get these interesting and amazing items to the right home where they will be appreciated, and not necessarily just to the highest bidder. Also, if any of your local shop owners, artists, tradesmen or restaurant contacts would like to put some of the materials from the building to use, I would prefer to give local businesses first dibs on anything they may want or need. (Know anybody who wants a giant safe? Haha.)

“Thank you so much for your help in drawing attention to the reuse/repurposing/recycling of Renaissance Books – hopefully, together we can all make a change in the way people view demolition, and the methods used to undertake such projects! Wouldn’t it be great if this became the norm in how to do things, rather than the rare exception?

9 thoughts on “Plenty of Horne: Inside the Renaissance Book Shop”