Sex and Death and Scheherazade

Kathryn Posin’s childhood fantasies -- and adult politics -- led to this exotic dance for the Milwaukee Ballet. 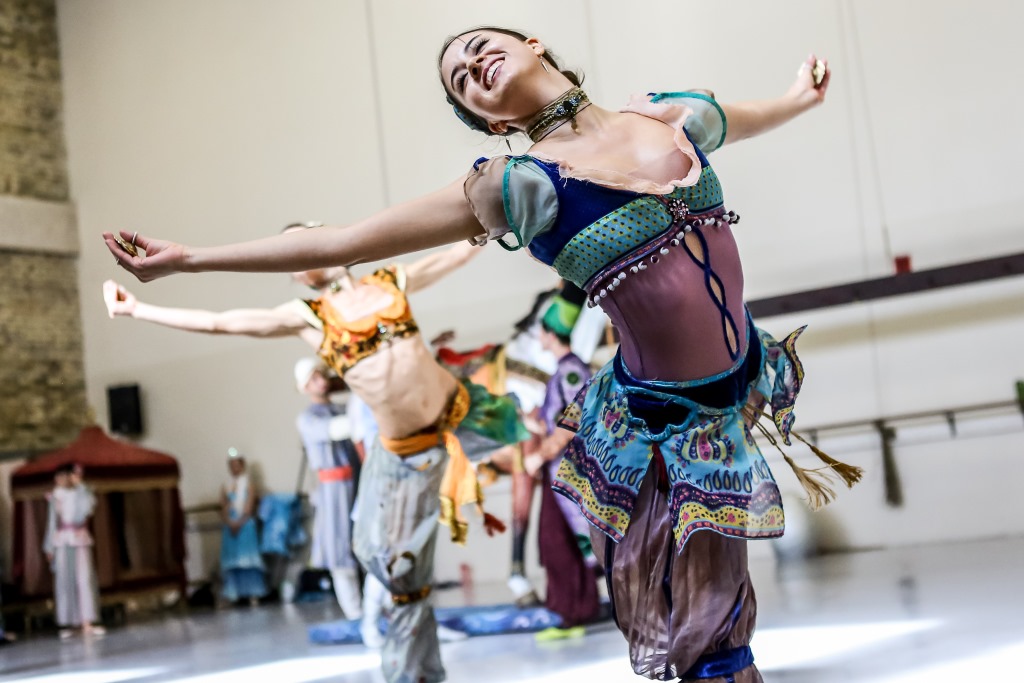 Kathryn Posin, the world renowned choreographer, exudes a calm confidence working with her dancers on the upcoming ballet, Scheherazade. She knows this work backwards and forwards, after all, having first premiered it for the Milwaukee Ballet in 2003 and seeing it performed in many cities by many different companies since then. But the show’s true origins can be traced back to her parent’s living room, where a 12-year-old girl danced to its famous music, using her mothers scarf for a bit of Arabian Nights flare.

“I would leap to this music all night long and I’d get bruises because I would run into the coffee table. But I felt the passion and the fantasy,” Posin recalls.

Much of this ballet springs from those early living room performances. At least, the “intuitive, spontaneous reaction to the music” is still there, Posin says.

The ballet, which opens Thursday, Oct. 20 (tickets and show times here) at the Marcus Center for the Performing Arts, features the original, beloved Rimsky-Korsikov composition being played by the Milwaukee Ballet Orchestra. The performance is in the vein of traditional ballet, though Posin has injected her own idiosyncrasies forged throughout decades of experience in modern and post-modern dance.

Back in 2003, when Posin first created Scheherazade, she wanted a project with a wider popular appeal. A big story ballet like this (It boasts 41 dancers) brings in larger audiences than the avant garde and abstract performances Posin has spent most of her career working on. Since then she has brought this ballet around the world to places like Bulgaria and Qatar. This years run will mark its third run in Milwaukee.

Posin has many connections to this city, having taught years ago in the UW-Milwaukee Dance Department. She studied dance composition with Louis Horst, Anna Sokolow, Merce Cunningham, and Hanya Holm, has created more than 50 original works for her Kathryn Posin Dance Company and has choreographed for many companies, including Ballet West, Netherlands Dans Theater, Alvin Ailey American Dance Theater, Eliot Feld Ballet; the Ohio, Kansas City, Sacramento, Cincinnati, and Hartford Ballets and the Extemporary Dance Company of London.

Her choreography for Scheherazade is, in some ways, a response to the original 1910 choreography of Michel Fokine, one the best-known choreographers in dance history. But to Posin, Folkine took the story of Scheherazade saving her fellow country-women from a murderous Sheikh by distracting him every night with folkloric tales, and instead centered it around the sheikh and prominently featured scenes of sex and death.

“All he did was have someone fucking someone,” she says.

Scheherazade comes from the famous One Thousand and One Nights, a collection of folk tales compiled in Arabic during the Islamic Golden Age. The tale of Scheherazade involves a Sheikh in Baghdad who finds his wife cheating on him, murders her, then takes a new wife every night and murders her in the morning. Scheherazade, hearing of this, decides to offer herself as a wife and distracts the Sheikh with stories for 1,001 nights, so that each day he must let her live to hear the next tale.

Posin was attracted to the story as a young girl and as an adult for the grandeur of the ancient kingdom and its culture. Still, sex and death are strong themes of the story and she remembers being drawn to its risqué elements as a girl.

She imagined “palaces and big kings and horses and people getting killed,” Posin recalls. “I also knew there was sex. And I had an idea of what it must be and that it would be great.”

Posin pays homage to Fokine’s Scheherazade with carpets and harems. But her ballet centers on the brilliant namesake of the show, who takes action upon hearing, “that her country women are getting bumped off every night after getting laid,” as Posin puts it, and decides to save them through story-telling with tales of now-famous characters like Aladdin and Sinbad.

“Scheherazade has read the myths and the fables and the legends of the people.” Posin compares her to a research historian or an anthropologist like Margaret Meade.

And the story plays out a classic battle between matriarchy and patriarchy, Posin adds.

The choreography for this ballet was developed for the original performance in 2003, but the political murk of this presidential election has certainly been on Posin’s mind. The recent political dialogues, at their darkest, have veered into anti-Arab and Muslim tropes and more recently into virulent misogyny

“It was all choreographed before this shit show happened,” Posin says, but it does create obvious thematic connections, she says.

Yet the the ballet is set in Baghdad 2,000 years ago, during a golden age for this fabled city in the fertile crescent. Posin thinks about the contrasts between the glory of the ancient city and its current state.

“I usually don’t say anything, but I’m sick of not saying anything. The greatest, most blazingly glorious of kingdoms has fallen into despair and rubble and nothingness and war,” she laments.

Posin’s Scheherazade revels in the beauty and traditions of that ancient city. The large production, with over 30 dancers, features elaborate set pieces like a nearly life sized horse. 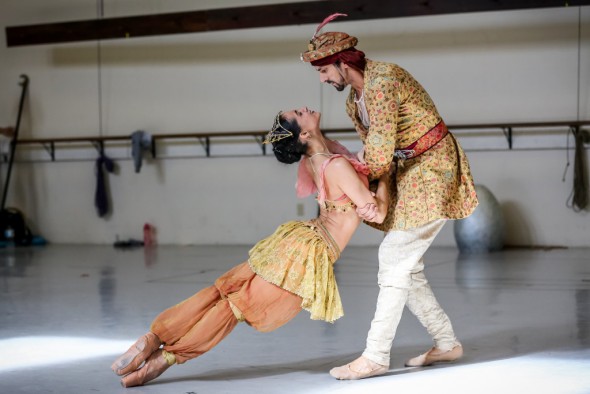 The show was done by the Milwaukee Ballet a second time in 2006, and for this third staging there are only two dancers who were in a previous production. One of them, Davit Hovhannisyan, was previously in a minor role and is now playing the Sheikh. Posin says the new crop of dancers had to become accustomed to her style of choreography and direction.

“I know what ballet is and I can have them do it, but I always add my own little twists.” So it’s a traditional ballet, but with distinctivbve differences: When the genie comes out of the lantern, for instance, he will do a little hip-hop popping and locking for comic effect

Posin was told as a little girl that she didn’t have the stuff of ballerinas, and was pointed towards modern dance. Now, after a ping-pong career in dance, she’s once again staging a traditional ballet that has taken her all over the world.

“It’s total revenge,” she admits, “and I think most art is about revenge.”

One thought on “Dance: Sex and Death and Scheherazade”