Baseball, Opera and Me

The grandfather of Florentine Opera’s guest star Adriana Zabala was a major league pitcher, and my personal hero. 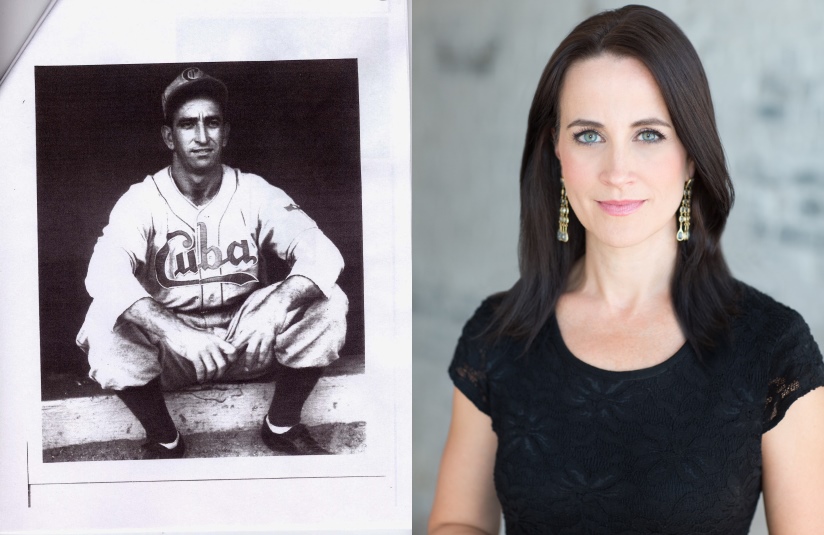 Flipping through the mail at home some years ago, my eye was caught by a striking photo of a young singer on a flyer from the Minnesota Opera. Then, I noticed her name, Adriana Zabala. Jolted to full alert, I ran upstairs to my computer to check her website and quickly dashed off an e-mail.

“Are you by any chance related to a former semi-pro baseball pitcher named Adrian Zabala, who played in the Paterson, New Jersey area in the 1950s?

“I was a kid pitcher in that area in those days and Zabala was sort of a mythic figure — in his early 40s, he was the local equivalent of grizzled major league veteran Sal Maglie.

“At age 15, I couldn’t believe that anybody as old as Zabala could still pitch, and well.

“At any rate, my wife and I named our only child Matthew Adrian Lamke, solely because I pushed for the name Adrian.

“I never met Adrian Zabala, just saw him pitch, and know nothing more about him than that.

“But can your name and his be just a coincidence?

“This inquiry is merely to satisfy idle curiosity. Adrian Zabala was a cool dude.”

I pushed the send button.

And, to my absolute delight, I received a reply from Adriana the next day.

“Thanks so much for your note. You made my day. It’s always a very special treat in our family when someone tells us about an impression or experience they had with my grandfather through his baseball career. So yes! Adrian Zabala was my grandfather. My father is Adrian Junior and I was named for them. It’s always been a source of happiness and pride for me.

“I was very close to my grandfather, whom we called ‘Sugar.’ Long story, but it suited him perfectly. This larger than life old Cuban baseball player who was outspoken and funny and warm, all in an accent that remained entertainingly thick throughout his life. He died in early 2002 and my heart is still heavy when I remember he is not a phone call away.”

Adriana attached family photos to her e-mail, including one of her grandfather signing a major league baseball contract with the New York Giants in Puebla, Cuba in the 1940s.

Seated beside him — you could have knocked me over with a feather — was Sal Maglie himself. They looked somewhat alike, although Zabala’s features were more angular. Neither man was especially big and both were, to use the sports cliche, grizzled.

The photo led me back to the internet, where I quickly discovered from baseball reference sites that Adrian Zabala, left handed pitcher, five feet eleven (I don’t think he was that tall), 165 pounds, actually had had two brief stints in the majors with the Giants, 11 games in 1945 when he was 28 years old and 15 games with them in 1949.

When I saw him pitch semi-pro in Paterson that time in 1956 or 1957,  I was immensely impressed with his pitching skill and with his assured style on the mound but I had no idea that I was watching a former major leaguer. When Zabala was in the majors, I would have been three years old (in 1945), and seven (in 1949), and although I clearly remember my first newspaper reading experience — the big black headline “Babe Ruth Dies” in the New York Daily News in 1948 (maybe it was “Babe Ruth Dead at 53” or something, but you get the idea) — I was not, even by 1949, a regular reader of the sports pages.

Adriana’s e-mail continued: “My grandfather was interested in my career and always encouraged me and attended innumerable performances over the years. He, by the way, had a terrific singing voice and a great sense of rhythm..

“Thanks for writing and I hope to see you for Pinocchio! (If you come, please come back and say hello!)”

Adriana’s reference to Pinocchio was to the new opera that she was to star in with the Minnesota Opera the next spring, hence the flyer we had received in the mail. We were on the mailing list by virtue of having attended a performance at the Minnesota Opera in 2004, Stephen Sondheim‘s Passion, starring Patricia Racette, an opera singer whom my wife and I have followed around some since 1999.

It turned out we would not be able to attend Pinocchio because, during its entire run — to keep the opera-baseball theme going — we would be in Scottsdale, Arizona for Milwaukee Brewers‘ spring training, something we have done every year since 1978.

So, we checked Adriana’s performance schedule and found that she would be singing Cherubino in Mozart’s The Marriage of Figaro with the Lyric Opera of Ottawa that September, a performance that we could get to.

After exchanging a couple more e-mails with Adriana, we flew up to Ottawa that September for a few days, caught her performance one night and loved it (as did the critic for the Ottawa newspaper, the Ottawa Citizen), thinking her the best singer and the best performer in the entire production, and got together with her post-performance for a couple of hours of wonderful conversation, wine and cheese at the Chateau Laurier, a big old landmark hotel adjacent to the Parliament grounds in Ottawa and only a couple of blocks from the National Arts Center, site of the opera performance.

That was the week that Lehman Bros. collapsed, and less than two months before the Obama–McCain presidential election, so there was a lot to talk about besides opera (about which I know only a little) and baseball (about which I know maybe a tad more).

Adriana herself was in Ottawa with her mother, who was caring for Adriana’s young daughter while Adriana’s husband stayed home in Manhattan. More coincidences emerged during the conversation. Adrian Zabala ended his baseball days in Jacksonville, Florida as manager of the minor league team there. My family moved to Jacksonville in 1957.  I never knew that Adrian Zabala was in Jacksonville during the two years I spent there, my last two years of high school. His son, Adrian Jr. — he became Adriana’s father — pitched for a local high school there overlapping my time pitching at another school in Jacksonville. The two teams never met. Adrian Jr. later had a minor league pitching career, ended by injury. My pitching career was over with high school, ended by lack of talent.

Did my father move our family to Jacksonville because of some connection with Adrian Zabala Sr.? I wonder. My father was a big baseball guy. He managed an Army camp team in Texas during World War II and Little League and Pony League teams I played on in Paterson in the 1950s. I don’t remember him ever saying anything to me about Zabala, either in Paterson or Jacksonville, but I can’t help wondering whether he knew Zabala, or had at least read something in the Paterson newspapers about Zabala heading to Jacksonville, putting the spark of the idea in his own head. I will never know. My father died in the 1990s. 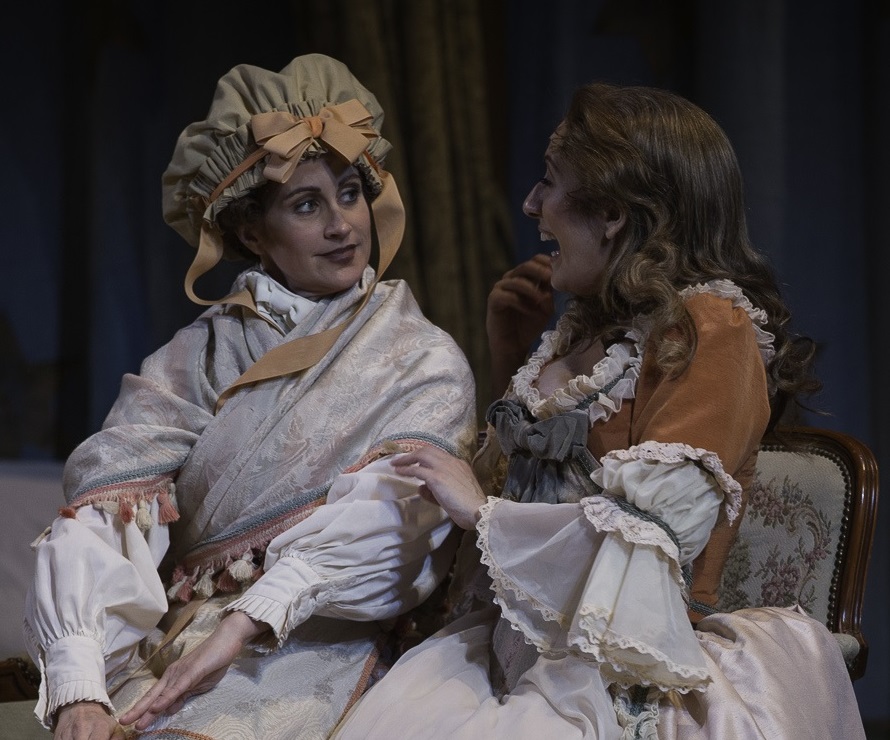 Adriana Zabala as Cherubino and Jamie-Rose Guarrine as Susanna. Photo courtesy of the Florentine Opera Company.

Since that September, 2008 evening with Adriana, we have followed her career some on the internet. She and her husband moved to the Twin Cities not long after, where she had already performed a number of times with the Minnesota Opera, and she seems to have settled into a performing and teaching career (at the University of Minnesota). She and her husband have had a second daughter. She had a prominent role in the Minnesota Opera production of Wuthering Heights, in 2011, which we could not get to because of scheduling, and in the Minnesota Opera production of Doubt in January of 2013, which we did see and enjoyed very much, especially Adriana.

Then, later in 2013, Zabala made her debut with Milwaukee’s Florentine Opera singing the role of Cherubino in Mozart’s The Marriage of Figaro. My wife and I attended and loved her performance.

In 2014, I attended the Florentine’s workshop production of Sister Carrie at the opera’s rehearsal hall in Riverwest, loved it, and was able to exchange greetings with Adriana afterwards. She was gracious, as always.

Now the world premiere of the new opera will occur here on Friday night with Adriana playing the title role.

And yes, I’ll be there. In the front row. Maybe wearing a baseball cap.