Weekly wages would be 5% higher for non-union private sector male workers if unionization was at 1979 levels.

By Tamarine Cornelius, Wisconsin Budget Project - Sep 15th, 2016 11:11 am
Get a daily rundown of the top stories on Urban Milwaukee 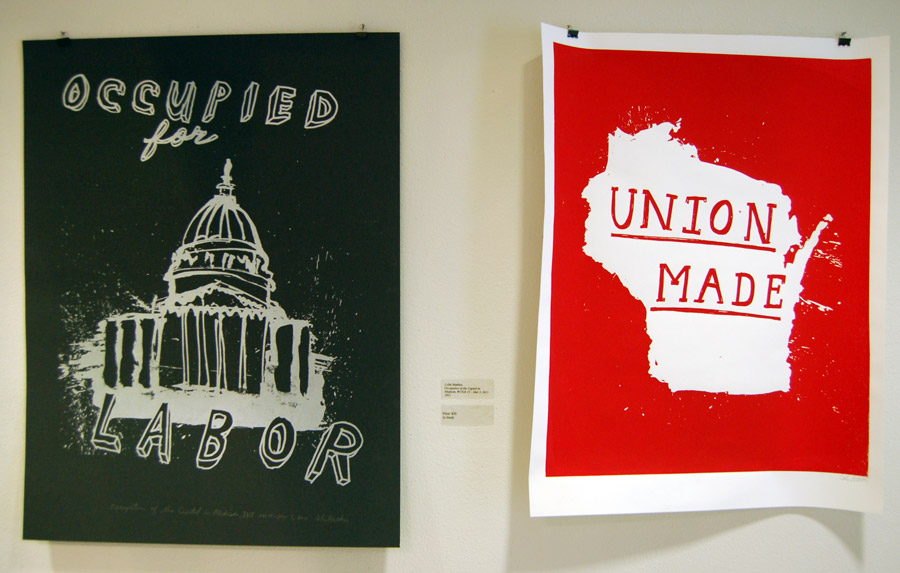 Prints by Colin Matthes of Justseeds.

The decline in unions has reduced pay for non-unionized workers as well as unionized ones, costing some workers thousands of dollars a year in lost wages, and is a major contributor to growing levels of income inequality, according to a new report from the the Economic Policy Institute.

It’s well-establish that union workers earn more in wages and other compensation than non-union workers who are otherwise the same in education, industry, age, and other factors. Union workers are more highly paid than their counterparts, and better off with regards to health insurance, retirement, and paid time off.

Unions also benefit non-union workers as well. Non-union workers benefit from a strong union presence in their labor market because unions set wage and workplace policies that are often followed by other businesses that do not have unions. In order to attract employees, non-unionized employers must offer wages similar to that agreed upon at unionized workplaces. And non-union businesses may offer higher wages to forestall worker efforts to unionize.

Union membership has dropped sharply in Wisconsin and elsewhere in recent years. In 2007, 15.4% of Wisconsin workers were represented by a union, dropping to 9.4% in 2015. Governor Scott Walker signed legislation limiting the unionization rights of private-sector workers in 2015, which is likely to drive the number of workers represented by unions even lower going forward.

That decline in unionization has cost some Wisconsin workers thousands of dollars, even if they are not covered by a union. According to the EPI report:

The effects on women workers are not as large, because women were less likely to be represented by a union in 1979.

“Rebuilding our system of collective bargaining is an important tool available for fueling wage growth for both low- and middle-wage workers and ending the era of persistent wage stagnation.”